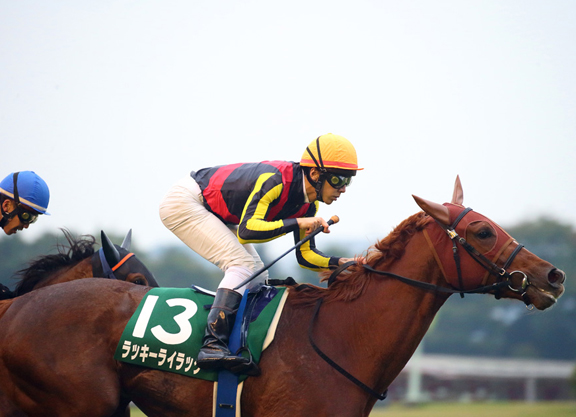 Sunday Racing's Lucky Lilac (Jpn) (Orfevre {Jpn}) looks to become the first horse since the talented Snow Fairy (GB) (Intikhab) in 2010-2011 to register back-to-back victories in the G1 Queen Elizabeth II Cup (2200m), to be staged this year and next at Hanshin Racecourse while Kyoto Racecourse undergoes major renovations.

The daughter of American Grade I winner Lilacs and Lace (Flower Alley) led home a female one-two in the G1 Osaka Hai (2000m) at this track in early April, besting the talented Chrono Genesis (Jpn) (Bago {Fr}), before finishing sixth to that rival in the G1 Takarazuka Kinen over course and distance June 28. Last year's G1 Longines Hong Kong Vase runner-up has a single appearance since, a sound third to the re-opposing Normcore (Jpn) (Harbinger {GB}) in the G2 Sapporo Kinen Aug. 23 in the far northern part of Japan. She'll have to work out a trip from gate 18 with Christophe Lemaire in the saddle.

“After the Takarazuka Kinen, she was in good shape so I decided to race her in the Sapporo Kinen and, despite the long haul to the venue and all, she really tried hard, as she does,” trainer Mikio Matsunaga commented. “She returned to Ritto about a month again and has gotten a lot of work. She looked good this week too.”

Mirco Demuro, who has been aboard Lucky Lilac for all four of her runs this season, has the call atop 2019 G1 Yushun Himba (Japanese Oaks) victress Loves Only You (Jpn), one of seven daughters of the late Deep Impact (Jpn) in the field of 18. Third, beaten 1 1/2 lengths in this event last year, the bay filly has yet to break through in three starts this term and was fractionally disappointing when only fifth to Salacia (Jpn) (Deep Impact {Jpn}) in the G2 Fuchu Himba S. at Tokyo Oct. 17.

Centelleo (Jpn) (Deep Impact {Jpn}) looms an interesting alternative to the three market leaders. Fourth and not beaten far in last year's QE II, the 5-year-old missed narrowly in the G3 Mermaid S. in June and prepped for this with a runner-up effort to 2019 G1 Japan Cup second-place finisher Curren Bouquetd'or (Jpn) (Deep Impact {Jpn}) in the G2 All Comers S. over this trip at Nakayama Sept. 27.