Loza and Ishaq Making a Splash 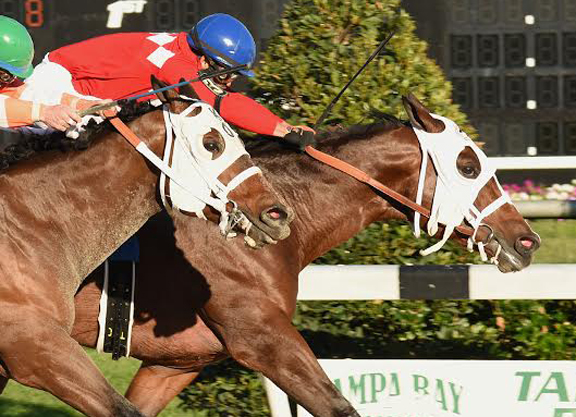 Trainer Efren Loza Jr. endured an unexpected anxious moment in the final furlong of Saturday’s Inaugural S. at Tampa Bay Downs. Just when it appeared that his promising 2-year-old Ishaq (Harlan’s Holiday) was home free with a four-length advantage, the colt took a series of erratic steps in deep stretch and nearly lost the race [Video].

Fortunately, Ishaq re-engaged after the unprecedented incident and prevailed by a neck over a surging Formal Summation (In Summation), but it was not until after the race that Loza realized something had gone awry with his runner’s blinkers.

“I was seeing the race live and I didn’t see the blinkers [come loose]–I thought that something went wrong with the horse,” recalled Loza. “And after that I saw the blinkers, and the jockey told me that the horse stopped and lost his momentum at the end. When he saw the other horses, he started again and won by a neck. That’s just something that happened–an accident.”

Although Loza is well acquainted with the twists and turns of racing, he admitted that he had never seen a comparable incident during the running of a race. With more time to digest Ishaq’s race after speaking with jockey Pedro Cotto Jr., the 31-year old trainer concluded that the trouble with the blinkers began before the gate opened.

“I talked with the jockey and before the start, the horse jumped a little bit and one of the strips from the blinkers fell off,” the trainer explained. “With the wind and the speed of the race, the other part of the blinker came off and the blinkers kept flapping. The last thing was that the blinkers [covered] the eyes of the horse.”

Heavily backed as the 3-5 choice in the six-furlong Inaugural after romping by 10 1/4 lengths in his 5 1/2-panel unveiling in Oldsmar Nov. 28 [Video], Ishaq maintained his unbeaten record, albeit in unorthodox fashion. After the colt emerged from Saturday’s test seemingly no worse for the wear, Loza said that his trainee’s next start will likely come in Tampa’s Pasco S. Jan. 23.

“We’ll run the next race at seven furlongs,” the native of Mexico revealed. “We decided to start the horse’s career at Tampa because he was very green. We knew he had good talent, and he won pretty good in his first race, and then we just wanted to run the second race on the same track. Now we have the other option of going to seven furlongs [in the Pasco] because we are trying to go two turns, but it’s step-by-step.”

Given that the Feb. 13 GIII Sam F. Davis S. and the Mar. 12 GII Lambholm South Tampa Bay Derby are the two most lucrative events of the Tampa Bay meet, successfully stretching his soon-to-be sophomore to a route of ground is an intriguing possibility.

“I think he’s a horse who can go a distance,” Loza continued. “He has good speed, but usually he can run more easily. In [his first two races], the jockey had to rush at the start because we needed good position, but seven furlongs is different. We can break more free and easy.”

Loza, who has won at a remarkable 46% rate with first-time starters over the past two years, credits some of his success to a hands-on approach with his horses from day one.

“I break all my babies,” he explained. “I take the horses I buy in the sales, and my lead owner [St. George Stable] breeds his own horses and I break [them]. I know all the horses because I put the saddle on them the first time. I usually try to work with every horse differently. Some horses have good speed and some don’t, so I just try to run them when they look ready.”

Loza, who followed American racing for years via simulcast signals in his native Mexico, said that he fulfilled a long-time dream by coming to America in 2011. The trainer acknowledged that the transition process has been aided by the similar structure of race conditions in both countries, as well as his extensive family ties to the game.

“I took my license when I was 19 years old in Mexico and I trained there for eight years,” related Loza, who once apsired to become a jockey if not for his height. “I’ve been in the horse business for a long time because my father was a trainer for more than 50 years. Now he has turned 70 years old. I always wanted to come here to America, and I had the opportunity to come with a couple of owners that I had in my country.”

At the fore of Loza’s supporters is German Larrea’s St. George Stable, another Mexican-based operation aiming to make a splash on American soil. While Larrea and Loza have become increasingly active at sales, the stable’s principle activity remains raising and competing North American homebreds. Loza saddled his first runners donning St. George silks in 2013, and joked that the owner has given him a convenient way of remembering when he arrived in the United States.

“When [Larrea] started his breeding, he named all of his horses starting with the letter ‘A’ and then with ‘B, C, D, E, F, G, H’ for eight years,” the trainer quipped. “When I arrived here to America, I started with the letter F. I broke the letter F. It’s something crazy, but that’s the way.”

The most accomplished runner in the Loza barn, MSW & MGSP Huasca (Tiz Wonderful), hails from the ‘H’ crop of St. George homebreds. The trainer noted that the gray filly is getting some much-needed recovery time after a rigorous sophomore campaign that included two stakes victories and a pair of placings in the GIII Miss Preakness S. and GIII Azalea S. Most recently fifth in the GIII Dogwood S. at Churchill Sept. 19, Loza said he is hopeful his charge will return primed for a successful 2016.

“I gave Huasca some time off after the last race at Churchill,” Loza said. “I gave her time off because the season for that filly was hard. She ran in [nine races] and we thought we should give her a rest and come back after two to three months in April. It’s just been two years, and she now turns to [her 4-year-old season], so she needed a break. She’s good.”

With the support of a committed owner and a stable full of talented runners like Ishaq and Huasca, the trainer who once dreamt of being a jockey seems likely to continue an upward trajectory. As for Loza’s own outlook, he tries to remember his beginnings with his father at the track in Mexico for proper perspective.

“I started like a lot of people who start from zero, like grooms and hotwalkers who go step-by-step,” Loza concluded. “If you don’t have the right owners and the right horses, it’s hard. The horses make the trainers.”