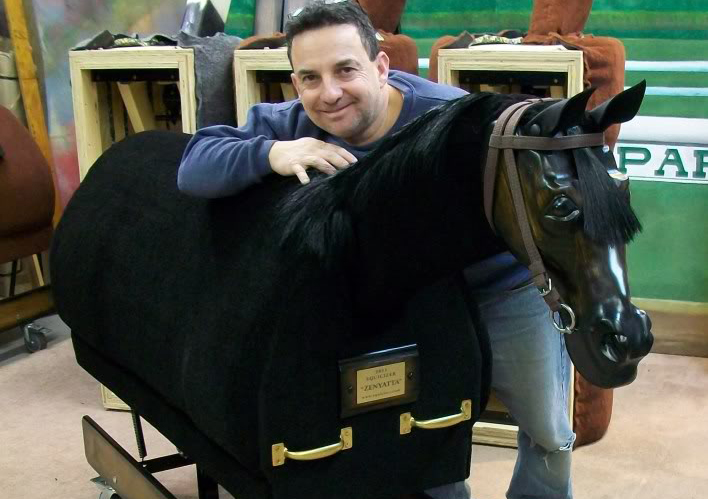 Thirty-four years ago, the very first Equicizer he built enabled the 1980 Eclipse Award-winning apprentice jockey Frank Lovato Jr. to recover from a broken leg and return to the saddle. These days, Lovato's distinctive mechanical wooden horse is at the center of his world and continues to deliver the support he needs.

Not only is the Equicizer his entire livelihood–Lovato, 53, works in his shop seven days most weeks–the business is helping him cope with the loss of his wife Sandy, who was killed in a car accident in Sept. 2014.

“It's what is saving me,” he said. “It keeps giving me focus. It gives me purpose. It's been my thing, my savior.”

Through the decades, Lovato has produced nearly 1,200 of his hand-crafted Equicizers, which can be found at racetracks, equine centers, small stables and in the homes of horse lovers around the world. His invention, born of necessity, enables riders, from novices to pros, to develop fitness and balance and work on techniques in a controlled environment without being far from the ground on the back of an animal.

Lovato came up with the concept of a horse-shaped device as he struggled to regain flexibility in his damaged left leg. The idea worked and he soon was fulfilling requests for personal Equicizers from other jockeys, including two of the biggest stars in racing history, Laffit Pincay, Jr. and the Angel Cordero, Jr. In the 2000s, Lovato's creation was used on the filming action closeups in the move Seabiscuit and to teach actor Toby McGuire the basics of riding a Thoroughbred.

Last year, the Equicizer picked up some unsolicited but welcome national media exposure with jockey Victor Espinoza shown warming up for rides on Horse of the Year American Pharoah. While those snippets of coverage on NBC telecasts and pictures in publications certainly were a plus for the business, they also had a restorative effect on the outgoing, energetic Lovato, who had retreated from view and put aside some of his other projects and passions following his wife's untimely death.

“I've been kind of hiding under a rock for this last year and a half,” he said. “I know there are a lot of people wondering what's going on with me.”

The short answer is that he has been dealing with his grief while building Equicizers in his shop situated about 60 feet from his house in Norwalk, Ohio, his wife's hometown. They moved their family to the small city 50 miles southwest of Cleveland after he completed his 25-year riding career in 2004.

Though the Wooden Horse Company was the foundation of the Lovatos' post-racetrack life, they both invested many hours in their individual non-profits. Sandy Lovato, who had worked at tracks and for Equibase  before his retirement, dove into therapeutic riding, gained certification as an instructor, and founded Stampede of Dreams, a local riding group for children and adults with special needs that continues on. He worked on fan education through his Jockey World, creating content for its website, conducting summer camps for children interested in racing, writing a magazine article, “What It Takes to be a Jockey,” that he turned into a DVD. In 2013, Lovato and his assistant Kayla Jarvinen, completed a video package, 365 Days of Racing Terminology.

Despite their many successes, it wasn't a smooth ride in Norwalk and the Lovatos encountered problems. In 2011, they sold the business to another company and became employees of its Equicizer division. A year or so later, the Lovatos were laid off and the division was closed.

“The idea was for growth and marketing and manufacturing,” he said. “It was supposed to be all of our dreams come true, but it kind of backfired. We lost the business and it took me three years to get it back. I had to buy it back.”

Lovato said he doesn't know where he would be today without the Equicizer, which has a base price of $2,995. He makes about 80 a year for customers around the globe.

“There was a point that I didn't think I was going to be able to get it back,” he said. “I really, really did not know what I was going to do. I just couldn't see myself doing anything else. Sandy used to tell me 'If anybody can get it back, you will, and if anybody will make it work it will be you' because she says I am relentless, just relentless.

Sandy Lovato's death came six months after they had reacquired control of the company and the rights to make Equicizers again. They were delighted to find that there were plenty of people interested in their product and ready to order.

“The business has been a blessing,” he said. “I'm grateful for what I've been given and what I have. And Sandy got to see that. The summer of 2014 was the best. After all the heartache we had gone through, we really had the summer of your lives, which we hadn't had in years. I feel very grateful and blessed that we got those memories and the business just continues to keep carrying me.”

Lovato's father, Frank. Sr., was a jockey and he followed him into the family business as a teenager in the 1970s. During his championship season, he won 249 races and  his mounts earned $3.7 million in purses. He became a very popular rider on the New York Racing Association tracks and spent the last few years of his career on the Chicago-Kentucky-New Orleans circuit.

Frank and Sandy Lovato met at Hialeah Park in 1979 and were married in 1982. They have three children and two grandchildren. Their daughter Megan handles the books for the business and their youngest son, Timmy, is a student who helps out in the shop. Time has helped ease the pain a bit, but Lovato said he has not gotten over his wife's death.

“It's the biggest challenge that I'll ever face because of the relationship we had, being together since teenagers,” he said. “She was my rock. She was everybody's rock. She was one of those people that you really depend on. I know I did. It was more than a relationship. It was somebody that you think 'well, if I ever lost them, I'd be lost without them.'”

With Jarvinen, and his family on his team, Lovato has seen the business grow. Thanks to the savvy use of the Internet, the little company, whose most important player is one personable, retired jockey with a vision and serious woodworking skills, has an international clientele. Among his current customers is a woman doing equine therapy in Singapore and a jockey school in Sweden.

“It is a balance,” he said. “I don't want to put myself out there too much where I wouldn't be able to handle the demand, but at the same time I can't be too quiet. I feel blessed that it seems like I'm never caught up. I'm eight weeks back-ordered right now. As soon as I start getting caught up I get a little nervous when it gets quiet and orders aren't coming in, but sure enough, boom, another bunch will come in and we're back-ordered again.”

Lovato also constructs highly personalized Equicizers that run the gamut, from a customer's beloved longtime pleasure horse to most famous Thoroughbreds in history. He made a Zenyatta for Hall of Fame jockey Mike Smith and has filled requests for Barbaro, Secretariat, Ruffian and Rachel Alexandra. In 2015, Lovato received a unique order from an elderly woman in England, whose riding days are over.

“She grew up watching Roy Rogers and his horse Trigger and asked me if I could build her Trigger, which, of course, I did,” he said. “It was really fun. I had to gather all of the photographs I could of Trigger and matched the color of the mane and tail and forelocks and the markings on the face to look like Trigger. She was elated that I was able to do that. She can no longer ride a real horse, but she can ride her Equicizer in her living room that looks just like Trigger.”

Lovato chuckled as he told the Trigger story, clearly delighted that he assisted someone several times zones away who was making adjustments, reacting to the changes in her life. It's something he understands all too well. Since his wife's death he has put the Jockey World venture on hold and has stopped playing music–he was a well-known performer, solo and in bands,  during and after his riding days–but has continued on with his old friend, the Equicizer.

“After the accident, I just really was numb, but I just knew that I couldn't lie down,” he said. “Sandy was the kind of person that if I were to disappoint her it would have been just lying down and giving up. I had orders coming in. I had people still excited about getting their Equicizer.

“It did take a good solid week or so where I came in the shop and looked at things that I was supposed to do, looking at my order sheet and knowing that these people were counting on getting their Equicizer. It was like putting one foot in front of the other. That was one place where everything was going to be OK. That's what kept me going.

Everything was going to be OK if I just keep building horses.”