Louis In World Cup Warm Up 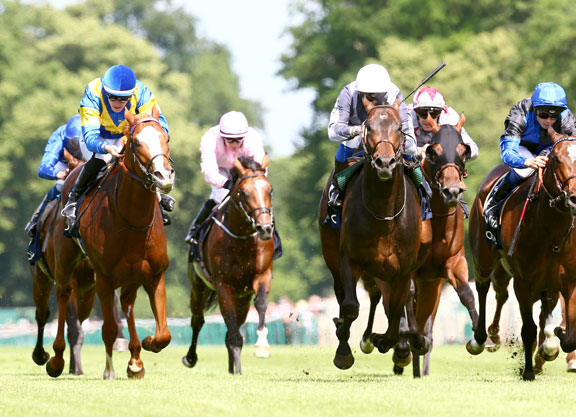 Sunday's action is low-key in Europe and Maisons-Laffitte starts early with France in the World Cup Final in the afternoon. Centre stage is occupied by the G2 Prix Eugene Adam, or Grand Prix de Maisons-Laffitte, where the G1 Prix du Jockey Club third Louis D'Or (Ire) (Intello {Ger}) bids to become the fourth group winner to emerge from that 10 1/2-furlong Chantilly Classic on June 3. Interestingly, Khalid Abdullah has shown a preference for this race which he has won five times and it is worth noting that the Juddmonte silks are carried this time by the June 21 G3 Hampton Court S. runner-up Crossed Baton (GB) (Dansili {GB}). In the G3 Prix de Ris-Orangis, France's sprinting stalwarts Finsbury Square (Ire) (Siyouni {Fr}) and Signs of Blessing (Ire) (Invincible Spirit {Ire}) race under penalties against some unexposed rivals including Godolphin's G1 Prix Jacques le Marois runner-up Inns of Court (Ire) (Invincible Spirit {Ire}).

“We don't see the step down to six furlongs as being a problem–he is a horse who likes a strong pace, so we hope that this will play to his strengths,” the operation's Lisa-Jane Graffard said of the latter. “This is a completely different task, but he ran well over the straight mile at Deauville last year and this is a straight six furlongs. He is in good form and we hope that he can show the promise of his races last year.”