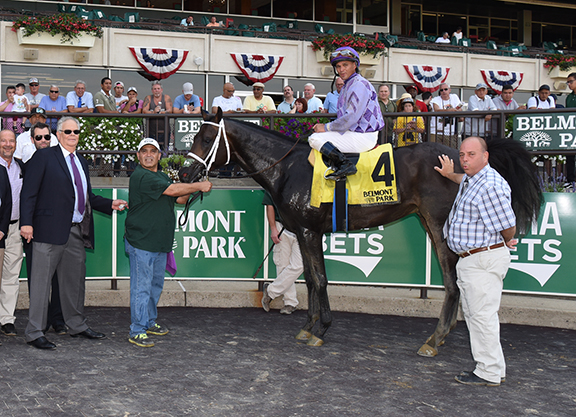 Everyone dreams of winning the lottery and reaping the rewards that come with it. A yacht? A Ferrari? A vacation home in the Hamptons? A private jet? Not Harold Lerner. He just wanted to own a few good race horses.

On the morning on Sept. 15, 2005 Lerner was a kitchenware salesman living in a modest home in Rutherford, New Jersey and a lifelong racing fan and horseplayer. Owning horses was not for him. It was a rich man's game. That all changed when he cashed the biggest bet of his life, on a 175,000,0000-1 shot.

Those were the odds of hitting the Mega Millions jackpot 11 years ago when the pool swelled to near record numbers. His wife Helen went to the Leprechaun II store on Park Avenue in Rutherford and paid $10 for 10 quick-pick tickets. That $10 turned into a $156,141,600 bonanza (At the time, the fifth largest lottery payoff in history) and is the reason why Lerner can now afford to be an owner with a medium-sized but productive stable that he believes will only get bigger and better. Two of Lerner's best horses, which he owns with partners, will go to the gate Saturday at Belmont in the $250,000 Sleepy Hollow S. for New York breds at Belmont. Runaway Lute (Midnight Lute) is listed at 7-2 on the morning line and Lerner's other horse, Pat On the Back (Congrats) is 10-1 on the line.

“I know people buy boats, cars, fancy stuff when they hit the lottery,” Lerner said. “For me, my Maserati was to have a great-looking 2-year-old training down in Ocala getting ready for the races. That's what I really wanted.”

Lerner, 71, first went to the racetrack with his father and uncle when he was 16, going to Roosevelt Raceway. But his real passion was the Thoroughbreds and he followed the game closely as a fan and as a modest bettor, never imagining that some day he would be winning stakes races in New York as an owner.

Winning the lottery does come with a downside, and the Lerners experienced it firsthand. They were so inundated by people asking for money and people lurking around their house they were forced to move to become less visible.

Lerner didn't waste any time getting started in racing, but he took a practical approach to his investments. He easily could have flown off to Keeneland or Fasig-Tipton and bought a $1- million yearling, but he didn't believe in that way of doing things.

“In my experience, 55 years of being a fan and now a participant, I believe, and I am sure the statistics bear this out, a majority of these expensive purchases at the higher levels do not turn out to be successful,” he said.

His first acquisition was a claimer. With Gary Contessa as his trainer, he claimed Symmetron (Awesome Again) for $25,000. In his next start he ran second for $35,000 and then won his following race, also a $35,000 claimer. Not only had Lerner picked up the purse money but the horse was claimed for the $35,000 by Scott Lake.

“When that horse was claimed by Scott Lake I turned to my wife and said, “See, isn't this game easy.'” he recalled. “We already turned an immediate profit.”

Lerner would, of course, discover that the game isn't nearly as easy as he thought it was, but he has had his share of success. He has stuck to his theory of finding value in horses that are in the mid-level when it comes to price range, whether they are claimers or horses sold at the sales.

He co-owned 2006 GIII Stuyvesant H. winner Accountforthegold (Successful Appeal) with Winning Move Stable and later sold the gelding to a Middle Eastern owner for “a sizeable profit.” In partnership with Ken McPeek, he campaigns The Truth or Else (Yes It's True), who has made $461,136 and has placed in three graded stakes races. He was bought at the 2013 Fasig-Tipton Kentucky Select Yearling Sale for $110,000.

Ironically, the one time he went outside his comfort zone when buying a yearling it turned into a major disappointment. He paid $355,000 for Koufax Curve (Kafwain), who made just $71,857 and ended her career in a $16,000 claimer.

“I like to think of myself as the second smartest guy in the horse racing business and everybody else is tied for first,” he joked.

Lerner is more and more gearing his operation toward mid-priced yearlings and the move is starting to pay off. He says that with the exception of the year they sold Accountforgold, this has been his most profitable year as an owner. Two of the reasons for that are Pat On the Back and Runaway Lute.

“I don't know what happened,” Lerner said. “Put a line through that race.”

Pat On the Back is trained by McPeek and cost $70,000 as a yearling. He won the Aspirant S. and was second in the Bertram Bongard.

“Pat On the Back is a horse that really digs in and tries really hard,” Lerner said. “I wouldn't be surprised if he were to run a big race tomorrow. It's definitely a tough race. If I get a decent price on either one of my horses I'll be at the windows.”

On Sunday, The Truth or Else will be in a $70,000 allowance at Keeneland. Lerner, who also employs Graham Motion, says he has 12 horses in training and has bought five yearlings at this year's sales.

The only other perk he has allowed himself upon his lottery win is to start a collection of luxury watches. Maybe he can use them to time how fast his horses have been running of late.