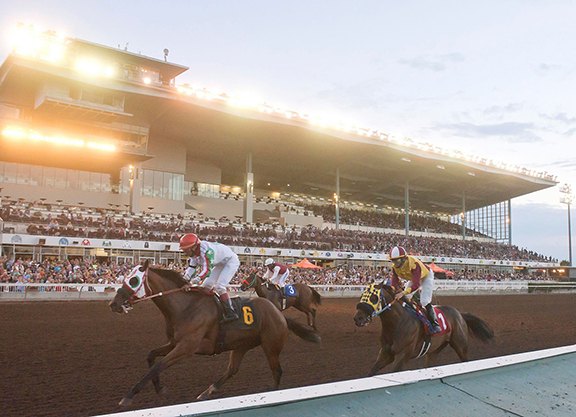 Among some of the new protocols outlined in the plan is an additional veterinarian to scrutinize horses entering and exiting the track during morning training, and the creation of a program whereby every equine fatality triggers a “Fatality Review” to be conducted by a panel including a member of track management, the track veterinarian, and the racing secretary.

Last Thursday, the CHRB gave Los Alamitos 24-hour notice of an emergency meeting to discuss the track's equine welfare and safety protocols–the first time the board has exercised its authority afforded through a state bill passed last year allowing it to provide just a day's public notice for a meeting to discuss the possible suspension of a racing license. Prior to that, the CHRB had to provide 10 days' public notice.

At Friday's meeting, CHRB executive director Scott Chaney explained his decision to file a petition to hold the emergency meeting, arguing that there has been an increase in equine fatalities during the first six months of this year when compared to the same period the year prior, along with a recent spike. According to the CHRB, there have been 13 fatalities at the track since May 26.

“I agree that there needs to be a serious review of policies and procedures at Los Alamitos,” said CHRB chairman Greg Ferraro last Friday. “Not necessarily as a fault of track's management, but I think there is a culture there amongst the practicing veterinarians and trainers that is pushing the envelope when it comes to the safety of these horses.”

CHRB equine medical director, Rick Arthur, however. disagreed with Chaney's decision to file the petition for the emergency meeting, arguing that he had no concerns with the track surface, and that broader issues factor into any equine fatality. “To be clear, I do not believe that Los Alamitos is an unsafe track,” he said.

On a 5-1 vote, the board gave Los Alamitos the green light to continue live racing during a 10-day probational period, at the end of which the board would decide whether the revised safety plan adequately satisfied its concerns.

In a statement Tuesday, Los Alamitos wrote that the track is “soliciting comments from the industry in general and particularly from the Board” regarding the plan's contents.

“Dr. Ed Allred, the owner and CEO of Los Alamitos Race Course, said that the plan is a further effort by Los Alamitos to provide for the enhanced improvement of the health and safety of each every horse and rider participating in racing and training at Los Alamitos,” the statement read.

The track has proposed a panel–comparable to the one already instituted for Thoroughbred races in California–to review race entries. “Based on information deemed of concern to the panel, in its discretion, may deny such entry or request the scratch of any horse the panel determines unsuitable for reasons of horse and/or rider safety,” the plan states.

A number of equine fatalities at Los Alamitos this year have been said to be due to “gastrointestinal” issues, rather than musculoskeletal injuries sustained through training or racing.

According to the plan, if within a year two Los Alamitos-based horses under the custody of a single trainer die for reasons other than racing or training, that trainer could be put under a form of probation whereby, if another horse in their care is fatally injured, that trainer could be barred from the grounds.

“Allred further stated that, notwithstanding his hope that the plan would be further improved through comments from the industry and the Board, the changes contemplated by the plan would be implemented immediately,” Tuesday's statement read.