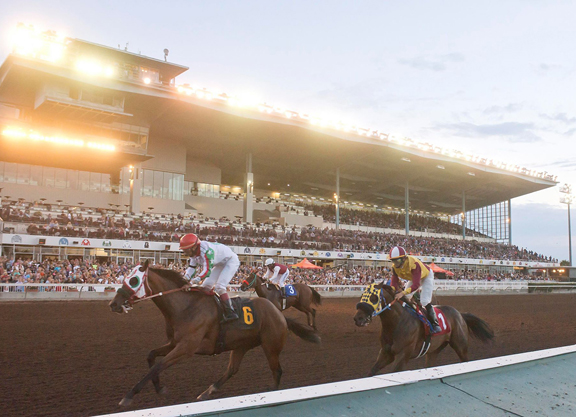 According to reports in the Los Angeles Times and The BloodHorse, Los Alamitos owner Dr. Ed Allred told the California Horse Racing Board (CHRB) Thursday that he plans on withdrawing his application to run Thoroughbred and nighttime Quarter Horse races in 2021. Allred said he would look to convert the Los Alamitos property to real estate.

Allred made the announcement after the CHRB voted to grant the track a six-month license instead of a license for a full year. The decision to give Los Alamitos what amounted to only an interim license was in response to the track having had an unusually high amount of fatalities this year. According to the Times, since Dec. 27 there have been 29 racing or training fatalities at Los Alamitos.

The move to grant Los Alamitos a six-month license was spearheaded by CHRB Vice Chairman Oscar Gonzales. Should the CHRB conclude that steps had been taken to cut down on the fatalities and that racing had been conducted without any serious problems, Los Alamitos would then be approved to run during the second half of the year.

Initially, the CHRB vote to give Los Alamitos the six-month license ended in a tie at 3-3. Commissioner Alex Solis did not take part in the virtual meeting. Two commissioners, Dennis Alfieri and Damascus Castellanos, reversed course and joined Gonzales. The dissenting vote came from CHRB Chairman Greg Ferraro who called issuing Los Alamitos a six-month license a “mistake” and lobbied for the one-year license.

Allred told the board that the track could not operate with only a six-month license because horsemen need to make plans for an entire year of racing.

“If you're going to do it only for six months, people can't make preparations and plans, going forward,” Allred said, according to The BloodHorse. “This is devastating to Los Alamitos. It will become a real estate development. I don't want that to happen.”

Gonzales replied: “If the kind of improvements continue, then racing continues at Los Alamitos, as will be the case at other racetracks. But I just don't feel that a racetrack that has not lived up to the expectations that we've set forth in reform–and a very serious-minded board–that we should allow for a carte blanche of racing dates without any conditions or stipulations.”

Los Alamitos will ask the board to reconsider its decision.

“Los Alamitos will be requesting reconsideration of the action taken by the board and hopes that its request will be acted on in an expedited manner,” said Los Alamitos Vice President Jack Liebau.

Though racing only a limited Thoroughbred schedule, Los Alamitos has become an important part of the Southern California circuit and its closure would have serious ramifications. It was slated to conduct two two-week Thoroughbred meets in 2021 and provides stabling for hundreds of Thoroughbreds on a year-round basis.