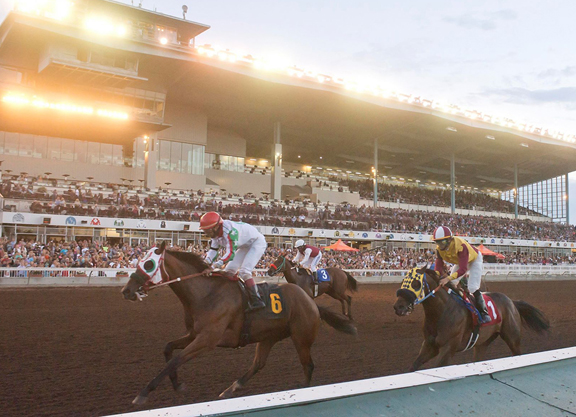 In a teleconference Monday morning to discuss whether or not to suspend Los Alamitos' racing license, the California Horse Racing Board (CHRB) voted in favor of the racing association, deciding that enhanced safety plans the track unveiled over the prior week satisfied board concerns after a rash of equine fatalities at the Southern California facility.

“Obviously we are,” Allred, who later in the meeting admitted to experiencing humiliation at recent events, responded. “We still feel we have a track that's equal to, or superior, to any in California as far as racing surface is concerned. I think there are other areas where we discern some improvement. We're going to work on those things.”

At the initial meeting July 10, CHRB executive director Scott Chaney explained his decision to file a petition to hold the emergency meeting, arguing that there has been an increase in equine fatalities during the first six months of this year when compared to the same period the year prior, along with a spike in recent weeks.

On a 5-1 vote, the board gave Los Alamitos the green light to continue live racing during a 10-day probational period. According to the CHRB, there have been 11 fatalities at the track since the start of June, including two during the track's probation period.

Part of the enhanced safety plan involves a panel–comparable to the one already instituted for Thoroughbred races in California–to review race entries. This panel was operational over the most recent weekend of racing at Los Alamitos.

According to Chaney, the panel scratched five horses on its first day.

The plan also includes a new rule restricting intra-articular cortisone fetlock injections to within 30 days prior to a race–restrictions already largely in place in Thoroughbred racing in California.

“Three of the last four racing fatalities at Los Alamitos would not have been eligible under those conditions,” said CHRB equine medical director Rick Arthur. “In addition, we've added a new restriction for multiple intra-articular injections into the same joint.”

Arthur repeated his belief that the track surface at Los Alamitos isn't a factor in the recent rash of equine fatalities. Rather, he sees it as primarily an issue surrounding veterinary practices and horse management, and a hitherto lack of scrutiny of backstretch activities at the track.

“One of the issues at Los Alamitos has been, we have very little stable surveillance, whether it's CHRB or anyone else,” said Arthur.

As such, he touted a new plan at Los Alamitos to employ an individual to monitor activity around the stable area, and an increased CHRB safety steward presence at the backstretch beyond race days.

“In that sense, it's a win-win,” said Arthur. “Having the [surveillance] cameras at Santa Anita is a fairly unique circumstance in racing in the U.S.–obviously we'd like to have that at all tracks, just not practical right now.”

“I have already seen improvements based on the new system we're implementing, more so than I expected to see,” said Fitzgerald, expressing surprise at the effectiveness of the entry review panel.

“I've implemented, [what] I don't think is even in the proposal, I've been doing post-race exams the following day of horses that we feel might need extra scrutiny,” Fitzgerald added. “And we've already identified a couple of extra horses there.”

This case is first time the CHRB has exercised its authority afforded through a state bill passed last year allowing it to provide just 24-hours public notice for a meeting to discuss the possible suspension of a racing license. Prior to that, the CHRB had to provide 10 days' public notice.