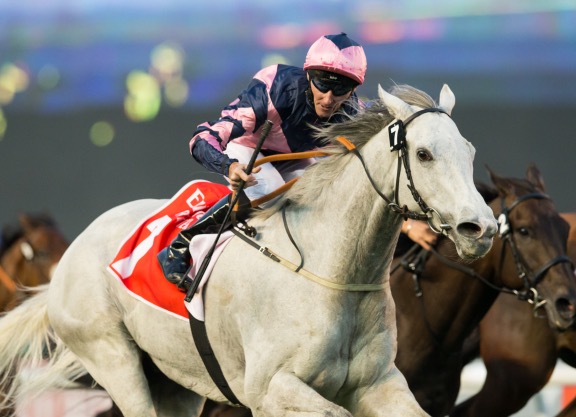 The 2019 G1 Queen Anne S. winner Lord Glitters (Fr) (Whipper) continued his resurgence at Meydan on Saturday with a come-from-behind victory in the G1 Jebel Hatta.

Sitting near the rear of the pack and on the outside while Godolphin's highly regarded Al Suhail (GB) (Dubawi {Ire}) was tucked in between horses, Lord Glitters began to wind up on the outside upon turning for home, but it appeared briefly as if Al Suhail had got first run. Godolphin's bay, however, drifted out and shortened stride at the same time as Lord Glitters began to kick into high gear under a driving ride from Danny Tudhope, and the grey hit the lead in the dying strides to win by a length.

“I think the way the race developed early on didn't suit him,” said Tudhope, who missed out on the horse's win in the G2 Singspiel S on Jan. 21 while he was still in England. Ongoing Covid travel restrictions meant that neither his trainer nor owner have made the trip to Dubai.

“He doesn't like it when they go that steady. I had William [Buick, on Al Suhail] in front of me and when he came out and started to make his move that's when [Lord Glitters] started to pick up and motor,” Tudhope continued. “He likes to come through gaps, he's that sort of horse, so in the end it suited him. It just shows you what a classy horse he is. He's got the ability but I think when he comes up against proper Group 1 horses these days it is hard for him with younger horses coming through. He ran some solid races the whole year last year and didn't have a hard campaign, so he came out here fairly fresh.”

The never-say-die run from the popular 8-year-old gave Yorkshire-based David O'Meara his first Meydan Group 1 victory. Lord Glitters races in the colours of Sandra Turnbull, whose husband Geoff died last July at the age of 74. The Turnbull family own Elwick Stud near Hartlepool. Their dual Grade 1 winner Mondialiste (Ire) (Galileo {Ire}), who has first 2-year-old runners this year, is now standing in France at Haras d'Annebault in Livarot, about 45 minutes south of Deauville.

Tudhope added, “It's just amazing really for the owners to get another Group 1 to their name. A big thank you to the owners who have given me plenty of chances. I'm glad I could deliver for them.”

Lord Glitters won four times in his native France before being sold for €270,000 at the 2017 Arqana Arc Sale. Since joining the O'Meara stable, he has added another five wins to his record from 35 runs in total. His next start in Dubai, which will be his fourth at Meydan this winter, will be in the G1 Dubai Turf on World Cup night in three weeks' time.