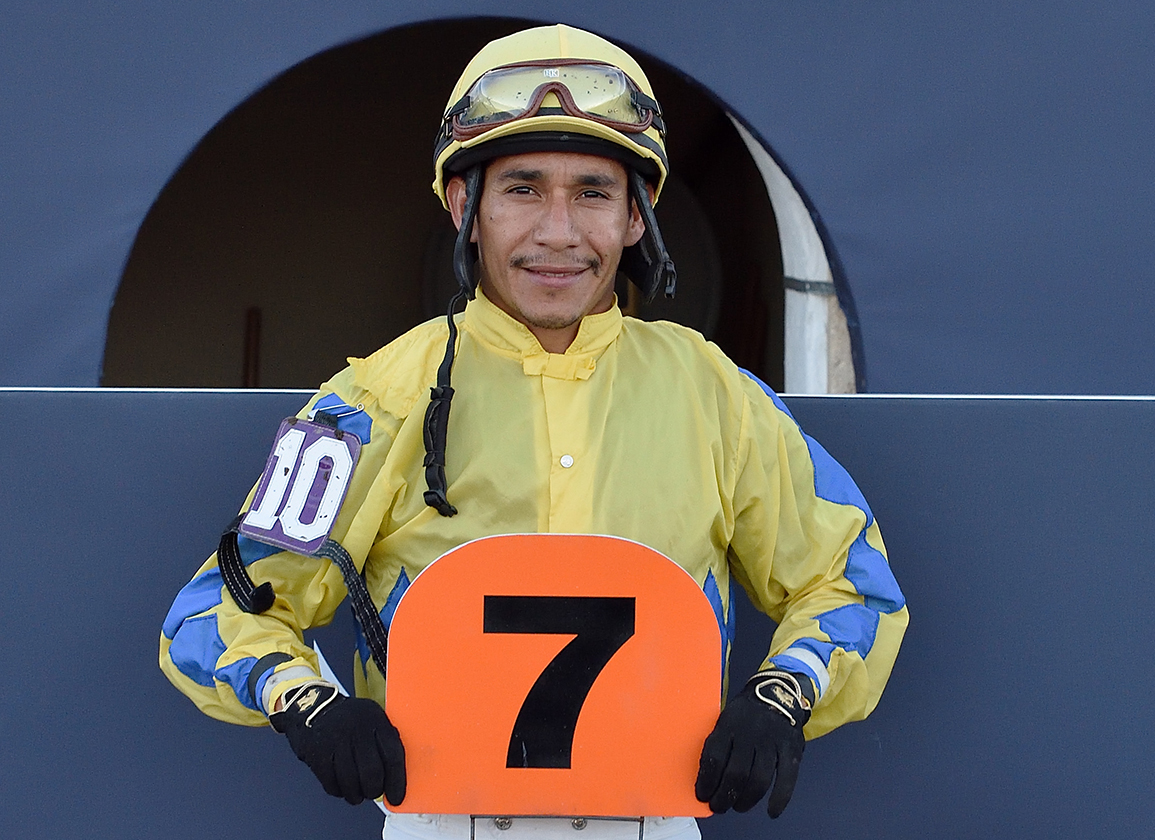 Cory Moran, the agent for top Monmouth rider Paco Lopez, informed trainers Thursday by text that his client will begin riding at the meet June 5. Lopez's status had been up in the air as he was considering his options in the face of new rules instituted at Monmouth that ban whipping. Some riders have said they would not ride at Monmouth because they felt the whip ban created unsafe racing conditions.

Lopez will not be riding at Monmouth this weekend, but that is because he has prior commitments to ride at Gulfstream Park. Lopez also has a suspension that needs to be served and has riding engagements in the days ahead at Delaware Park and Belmont. Those are the reasons why he won't be appearing at Monmouth until early next month.

“The unity didn't happen…so Paco does start riding at Monmouth June 5…thanks,” Moran, who could not be reached for comment Thursday, wrote to a number of trainers.

Lopez represents one of the last dominos to fall in what has at times been a bitter dispute between Monmouth's riding colony and the New Jersey Racing Commission, which instituted the new whipping rules. Several riders went on record saying they would not ride at Monmouth this year because of safety concerns. But any attempts there may have been to present a unified front have failed. Once Lopez's name was added to the list of available riders, nine of last year's top 12 jockeys had committed to the meet.

Lopez is a seven-time riding champion at Monmouth and led the standings last year. He had 51 winners, nine more than runner-up Ferrin Peterson.

In a related development, Monmouth has taken action against Antonio Gallardo, one of the riders who has opted to sit out Friday's opener over concerns about the whip rule. He has been suspended indefinitely pending a hearing. Dennis Drazin, the CEO of the management company that operates Monmouth, said that racing secretary John Heims had made the decision to ban Gallardo until a hearing could be held. Joe Bravo, another big name who has decided to sit out the meet, was not suspended. Drazin said that the reason Gallardo was banned and Bravo was not was because Gallardo's agent had accepted calls on the Friday card and had failed to honor them. Bravo will be a Penn National Friday, which means that he would not have been available to ride at Monmouth that day, whip ban or no whip ban.

“We will give him a hearing if he wants to come back,” Drazin said.

It appears that Gallardo's ban is a moot point. When reached by the TDN Thursday, the rider said that he has no intention of riding at the meet under the existing rules. He will ride, instead, at Presque Isle Downs this summer.

“I don't want to ride because I feel it is unsafe,” he said. “If they told me I was welcome to come back, my answer would be no. I don't know how I could ride without a whip. To me, it's like telling a policemen they have to do their job, but can't have a gun to protect themselves. I have nothing against Monmouth Park. I love Monmouth Park and it's like a second home to me. Because of this rule, I just wouldn't feel safe riding there.”

Of last year's top 12, only Bravo and Gallardo will be missing early on at the meet. Jorge Vargas, Jr., who finished ninth in the standings in 2020, will also be absent this weekend, but he has been injured and has not ridden since Mar. 20. Drazin said he recently talked to Bravo, a 13-time winner of the Monmouth riding title, and said “he was emphatic that he will not ride here this year unless the rules are changed.”

Nik Juarez, who nearly beat out Lopez for the riding title in 2019, has also clarified his position. He still has an outstanding suspension to serve, which some believed might keep him out of this weekend's races. But he will ride, which became possible after he secured a stay of his suspension. Juarez may now have the option of taking his days after the meet is over.

With most of the top riders back, concerns that a boycott would hurt handle have lessened greatly. However, handle may be off quite a bit this weekend because there are reports that it will rain heavily on Friday and Saturday, which would mean the races will come off the grass.