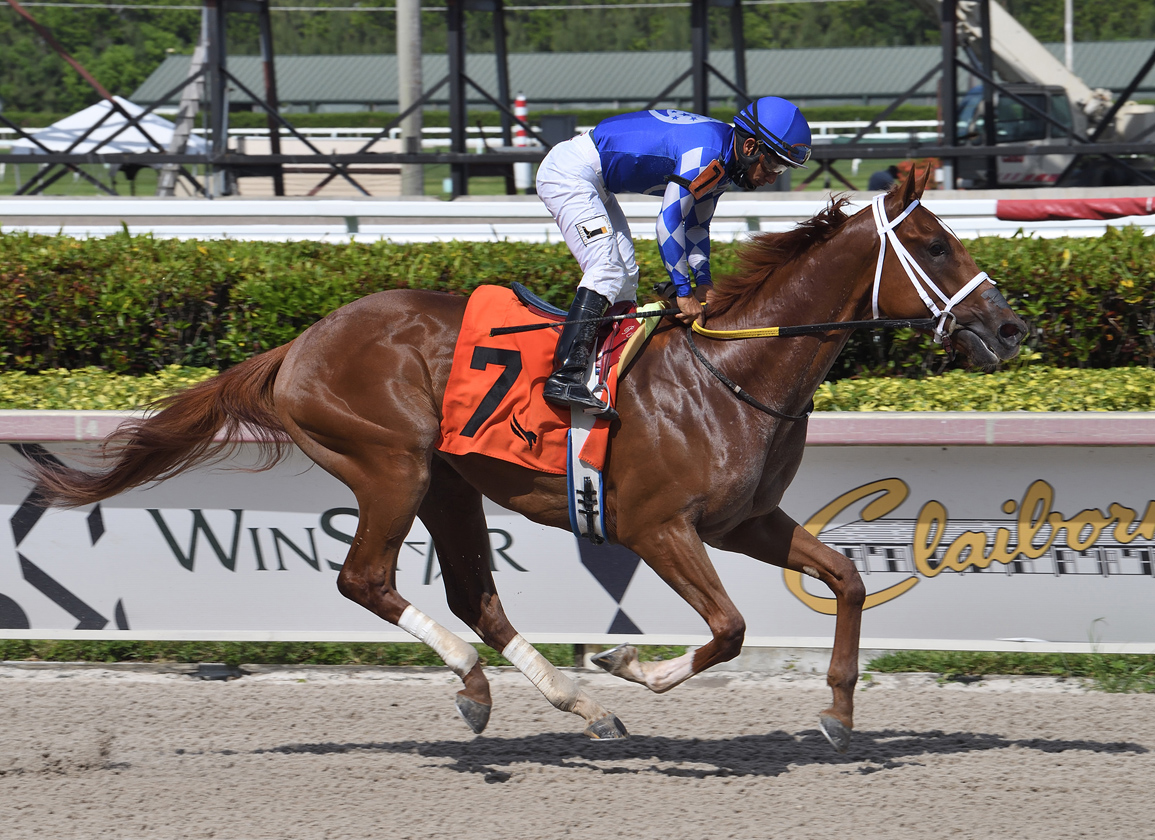 The Claiming Crown began in 1999 as a blue-collar version of the Breeders' Cup to reward primarily older horses who compete in the types of races that form the backbone of day-to-day American racing.

Twelve Volt Man (Violence) stalked patiently in mid-pack, then dove to the rail under deft handling by jockey Edwin Gonzalez to reel in a tiring leader in the final hundred yards for trainer Joseph Jr. and owner Magic Cap Stables. The winning margin was three-quarters of a length in 1:49.92 over a “fast” main track.

“I thought that maybe I'd get beat at the wire there, but a lot of heart this horse has,” said owner/breeder Joe Anzalone, who eventually sold the mare but kept this gelding. “Words can't say [how proud I am]. I'm still shaking.”

The annual CC event is a partnership between the National Horsemen's Benevolent and Protective Association and the Thoroughbred Owners and Breeders Association. After initially rotating among smaller tracks, Gulfstream has evolved into the host site over the past 10 years.

All of Saturday's winners could have been previously snagged at the claim box for relatively low asking prices prior to competing for comparably higher CC purses.

Miles Ahead (Competitive Edge) was one such gelding. There were no takers when he broke his maiden by 12 1/4 lengths for a $12,500 tag back in January 2020. He finished seventh in last year's edition of this $85,000 CC Rapid Transit S., but subsequently won the GIII Smile Sprint S. and had a trip-troubled last-place try in the GI Vanderbilt H. at Saratoga this past summer.

On Saturday he avenged last year's CC defeat by winning the Rapid Transit by 1 1/4 lengths as the 13-10 favorite with a sweeping far-turn bid in 1:21.99 for seven furlongs. Lopez rode for owners David Melin, Leon Ellman, and Laurie Plesa.

“Races like the Claiming Crown are the bread and butter of horse racing,” said trainer Ed Plesa Jr. “It's great to see that they have a day like this, not because I won, but just because the everyday participants of the races are the ones that need a little bit more 'oomph.'”

One winner who was a re-claim for current connections stood out: Bad Beat Brian (Jack Milton) in the $90,000 CC Canterbury S. over five furlongs over the lawn.

The 4-year-old gelding had been claimed away for $62,500 at Churchill June 11, but was taken back for $40,000 by trainer Maker and owners Paradise Farms and David Staudacher in his next start July 16 at Del Mar.

Bad Beat Brian then waited until his fourth start off that re-claim to pay 4-1 dividends in the toughest spot he'd ever been entered. He surged down the center of the stretch to win by a length under Emisael Jaramillo in :54.78.

In the companion $90,000 CC Distaff Dash S. over five furlongs on the grass, 9-5 fave Payntdembluesaway (Paynter) bounded straight to the lead, dueled head-and-head with a 45-1 longshot, then asserted her dominance at the eighth pole to win going away by four lengths in :55.31.

Lopez rode for trainer Jane Cibelli and All My Hart Racing, Inc.

Despite a sweet 8-for-13 lifetime record, the 5-year-old mare has never been claimed despite being offered for $16,000 on four occasions. She's now 4-for-5 sprinting on the Gulfstream turf.

Silvestre Gonzalez rode for owners Richard Ciavardone and Home Team Stables. The win for conditioner Scott Lake was his ninth (third best among all trainers) in the history of the CC.

The 4-year-old filly was mired in a nine-race losing streak when those connections claimed her for $32,000 June 21 at Churchill Downs. She promptly won six straight Parx and Delaware, then ran second in her last outing up north before getting reacquainted with the winner's circle on Saturday.

The 7-year-old gelding was the oldest CC winner on Saturday's card. He had changed hands via claim for $8,000 and $10,000 earlier this year at Gulfstream.

The 5-year-old gelding is usually a front-end force. But on Saturday he stalked tepid fractions, took over on the backstretch, and was saved by the wire while losing steam late over 1 1/16 miles at 7-2 odds in 1:44.61.

Blue Steel was ridden by Lopez for trainer Jeff Hiles and owner James Woodruff. He's been a frequent winning shipper this season, getting his photo snapped on six occasions at five tracks (Mahoning Valley, Keeneland, Belterra, Indiana Grand and Gulfstream).

Lopez bookended the CC portion of the program with victories (four wins and two seconds in CC races, plus a score in a non-stakes undercard race). He decisively stormed straight to the front in the nightcap to control the pace in the $95,000

The 5-year-old homebred for Patricia Generazio had been last seen winning back-to-back starter-handicaps at Monmouth. Trainer Luis Carvajal had the speedster ready off a nearly three-month layoff to win at 3-1 odds in 1:39.82.