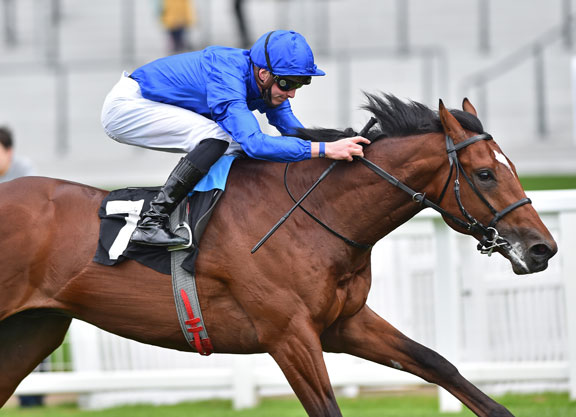 Ascot's seven-furlong Me2 Club EBF Future Stayers' Maiden S. on Friday looked one for future Classic prospects on paper and it was the 2-1 favourite La Barrosa (Ire) (Lope de Vega {Ire}) who came out on top to earn TDN Rising Star status. Having cost 750,000gns at the Tattersalls October Yearling Sale Book 1, Godolphin's son of the multiple group-placed Bikini Babe (Ire) (Montjeu {Ire}) carried a sense of expectation despite the presence of Derab (GB) (Sea the Stars {Ire}), the half-brother to Enable (GB) (Nathaniel {Ire}). Settled in mid-pack early by James Doyle as the pace proved only tepid, the bay was launched between rivals passing the two-furlong pole and was soon in front with first run on Juddmonte's keenly-anticipated fellow newcomer. Surging to the line with that rival in tow, he had 1 1/4 lengths to spare there as they pulled 2 3/4 lengths clear of the strongly-supported King Power-Roger Varian runner Greatgadian (Ger) (Siyouni {Fr}) in third.

Doyle was impressed. “I had sat on him at home and he had worked nicely and pleased us, so we expected him to run well and his price reflected that,” he said. “He didn't jump that quick and so I immediately found cover, which was the key to him as he was a bit bull-headed with me going down. Cover helped him relax and once I got a bit of a gap he quickened up really well. He can only keep stepping forward, as he can be a little bit wooden–he's that way at home and can take me on nice so it was nice that he learned how to do it the right way round. When the gap came, he was in front a furlong and a half out which is a long way on a newcomer at Ascot. The second horse looked quite nice in the paddock and he's shown a good turn of foot and won well. I'm sure a mile will not be a problem, as the dam operated in group races over a mile and a quarter and he's got a good stride. He's a big robust type and I'm sure we could see him a couple of times before the season is out. There might be options for him in France, where he could learn a bit more but Charlie will work it out, he does a great job of that.”

Charlie Appleby added, “The horse had shown some nice bits of work at home recently and we were confident the conditions would suit him. He seems to have a lot of natural pace and I don't see any reason to step him in trip yet, although his pedigree suggests in time he will get further. He doesn't have any lofty entries at this stage, but he might be one to look towards the [G3] Tattersalls Stakes at Newmarket. Knowing me, I could decide to take him to France.”

The aforementioned Bikini Babe was campaigned by Mark Johnston from seven to 12 1/2 furlongs, with her finest efforts being second placings in the 9 1/2-furlong Listed UAE Oaks on Tapeta and behind Zagora (Fr) (Green Tune) in the 10-furlong G3 Prix de Psyche. Also runner-up in the G3 C.L. Weld Park S. and third in the G3 Sandown Classic Trial, she is a daughter of Zeiting (Ire) (Zieten) who was successful in stakes races in France and the States. Bikini Babe is one of six black-type performers she produced, with the trio of Combat Zone (Ire) (Refuse To Bend {Ire}), Scottish (Ire) (Teofilo {Ire}) and Royal Empire (Ire) (Teofilo {Ire}) winning at group level.

Another of Zeiting's daughters, the G3 Prix Miesque third Zut Alors (Ire) (Pivotal {GB}), went on to throw four black-type runners of her own headed by the G1 Poule d'Essai des Pouliches and GIII Honey Fox S. winner Precieuse (Ire) (Tamayuz {GB}) and the smart listed-placed and Wokingham H.-winning sprinter Baccarat (Ire) (Dutch Art {GB}) who raced for this stable. Zeiting is a half to the speedy and precocious G3 Prix du Bois scorer Dolled Up (Ire) (Whipper) and to Madany (Ire) (Acclamation {GB}), who has made her name as the dam of the G2 Hungerford S. winner and G1 2000 Guineas S. runner-up Massaat (Ire) (Teofilo {Ire}), the G1 Commonwealth Cup winner Eqtidaar (Ire) (Invincible Spirit {Ire}) and last week's impressive Newmarket winner Mujbar (GB) (Muhaarar {GB}). The dam's yearling is a filly by Tamayuz (GB) named Once (Ire).