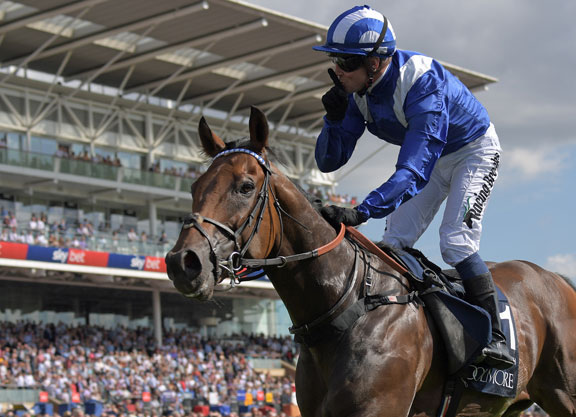 To breed three world champions would be considered by many a major achievement. To do so in a six-year period, even more so. But it is far rarer still to accomplish such a feat from 12 or 13 mares at any one time.

That is something Paul and Marie McCartan can lay claim to after Battaash (Ire) (Dark Angel {Ire}) topped the sprinters' division in the 2019 Longines World Racehorse rankings, following in the footsteps of fellow Ballyphilip Stud champions Harry Angel (Ire) (Dark Angel) and Tiggy Wiggy (Ire) (Kodiac {GB}). And who knows what Battaash might achieve as a 6-year-old in 2020, having returned to the Charlie Hills yard in mid-March in the hopes of adding to his eight group race victories, two of them having come at the highest level.

“Battaash's performance in 2019, gaining his second Group 1 win in the Nunthorpe S. in which he shattered Dayjur's 29-year-old record, was the highlight,” said Paul McCartan. It also strengthened hopes for the gelding's younger siblings. “It no doubt helped his full-sister sell to Shadwell for 800,000gns in October. Anna Law (Ire) (Lawman) has produced another cracking Dark Angel three weeks ago, this time a colt, and she visits Lope De Vega (Ire) in 2020. Lope De Vega is a proven sire with huge international appeal. I think he's a perfect match for Anna Law physically, as he's a big, rangey type and she's quite compact.”

Battaash and multiple Group 1 winner Harry Angel were born just two days apart at Ballyphilip Stud. The latter's dam Beatrix Potter (Ire) (Cadeaux Genereux {GB}) was sold privately off the back of her son's exploits, but not before foaling a 2017 colt by Cappella Sansevero (GB). From the first crop of a sire who began at a fee of €4,500, some may have dismissed his sibling, but for a yearling price of 140,000gns, Roger Varian and Sheikh Mohammed Obaid Al Maktoum were rewarded by an unbeaten Mill Reef S. winner and 'TDN Rising Star' in Pierre Lapin (Ire).

Harry Angel's first foals are arriving this spring, though Ballyphilip is without a representative by their star graduate for the time being, with Mystery Bet (Ire) (Kheleyf) having died carrying to him. McCartan said he hopes to purchase one of his first crop later this year and on Harry Angel's chances as a stallion he says, “I think he has a good chance–he was very precocious and speedy. He had a very similar profile to his father, even better actually, because Dark Angel didn't race beyond two.”

Along with Night Of Thunder, McCartan highlights Starspangledbanner as a sire on an upward trajectory. “I like Starspangledbanner,” he says. “I think he's done things the hard way. He's a proven sire at reasonable money, with good-sized crops to run for him, so I hope the momentum will continue for him.”

McCartan has an excellent strike rate of using young sires before they hit the big time, because as well as enjoying success with Dark Angel, he used Kodiac for a fee of €6,500 to produce 2014 champion 2-year-old filly Tiggy Wiggy. She is now part of the Coolmore broodmare band after selling to MV Magnier for 2,100,000gns in 2015 and in 2019 her first foal, Year Of The Tiger (Ire) (Galileo {Ire}), gained a Group 1-placing in the Vertem Futurity Trophy S.

All updates remain relevant to the Ballyphilip paddocks.

“We retained her half-sister Tiggy Two (Ire) (Bated Breath {Ire}) as a broodmare. She has a lovely filly foal by Kodiac and she is currently carrying service to Showcasing (GB).”

McCartan says he is a big fan of Whitsbury Manor Stud's rising star of the stallion ranks. “We have a breeding right in Showcasing, as I've always liked him. He's a proven sire who can get a young mare off the mark, and has better bred individuals coming along in the coming seasons.”

“Scintilating is a daughter of Siyouni (Ire) and a half-sister to Richmond S. winner Prolific (Ire) (Compton Place {GB}), from a speedy family,” McCartan said. “She's a gorgeous-looking mare with a great hip and quarters, with terrific depth. We saw her win as a 2-year-old on debut in a Newbury maiden and she looked like an aeroplane that day.”

The above mares cost considerably more than some of the bargain broodmare buys Ballyphilip have become known for, which McCartan describes as a sign of the times. “It's a reflection on the state of the market at the moment,” he explains. “There is a big shortage of the type of mares one would like to buy for breeding. If you want to stay in the game, you pay the premium, it's as simple as that.”

“I've always tried to use proven stallions, because otherwise you can destroy a young mare,” McCartan says. “Now that the market is becoming tougher and tougher, I'm even more inclined to using proven sires, but occasionally one [unproven sire] comes along who I'm keen to use.”

One new sire to have caught McCartan's eye is dual Group 1 winner Ten Sovereigns (Ire), to whom he plans to send a mare, though which one is yet to be decided. “I like the Scat Daddy line,” he says. “I really liked Ten Sovereigns when I went to see him. I loved his physique and I was very taken by him.”

Ballyphilip Stud supports its breeding operation with pinhooking, something McCartan experienced mixed fortunes with last year. “We had some good results selling in 2019, but found it a difficult year to purchase foals. My own personal opinion is that it was a poor enough crop of individuals. The number of foals that really excited us was small and consequently, there was excessive demand for the chosen few. We bought fewer than usual.”

McCartan's obvious love for the game began at an early age, though he was not born into the industry. “We came from a place called Ballymahon in County Longford,” he explains. “It wouldn't be a horsey area, but there was a family up the road called the Finns. They were big horse people–they kept stallions, had point-to-pointers and trained under rules. They also kept a few mares, so that's how we got interested in it.” The 'we' Paul refers to includes his brother Jim, who runs a successful breeze-up operation from his Gaybrook Lodge Stud.

“We always went to the local shows, point-to-points and racing at Kilbeggan and Roscommon,” McCartan continues. “Then I went to college, but I was interested in stud management as a career.”

After graduating, he worked at Juddmonte Farms in England, before venturing further afield to the Wallace family's Ardsley Stud in New Zealand and later returned to Juddmonte, this time in Kentucky. He was then based in Ireland, first with James Egan at Corduff Stud, then as assistant manager at Mount Coote Stud for Alan Lillingston, followed by eight years working for Liam Cashman at Glenview Stud.

Ballyphilip Stud was established in 2000 and in the early years, was managed by Paul's wife Marie, while Paul spent 14 years working for Denis Brosnan at Croom House Stud. Marie, like Paul, boasted experience with the industry's best, having worked at Rathbarry Stud and for the late Gerry Dilger in Kentucky, as well as for trainer Brian Meehan. Horses are in her blood, and she no doubt celebrated her brother Eugene O'Sullivan's recent Cheltenham Festival success with It Came To Pass (Ire) (Brian Boru {GB}), ridden to victory by her niece Maxine in the Foxhunter's Chase.

“I always made a point to work for who I thought were the best in the business and I learnt an awful lot from all of those people,” McCartan says.