Lope De Vega Stars On Track And In The Ring 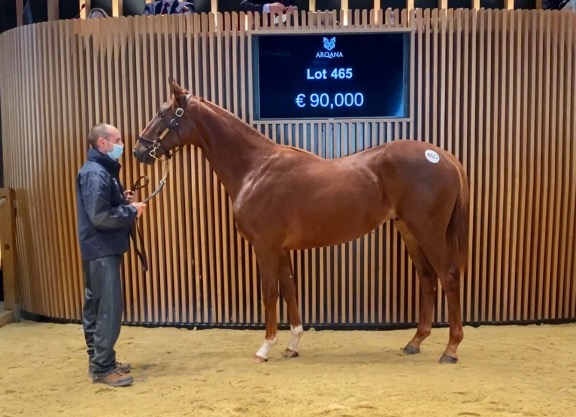 DEAUVILLE, France—The second part of the Arqana October Yearling Sale concluded on Wednesday with consistent results across the two-day section. Again, the clearance rate was encouragingly high at 82%, with 131 horses sold for €3,179,000 at an average of €24,269 and median of €20,000.

Lope De Vega (Ire) had been represented by his fifth juvenile stakes winner of the season when Godolphin's unbeaten Parchemin (Ire) landed the listed Prix Isonomy at Deauville and several hours later across the road at Arqana, another of the stallion's young chestnut sons led the third day of trade.

Bred by Framont Limited and offered through Haras de Castillon, lot 465 joined a large intake of sales yearlings for Al Shaqab Racing this season after Paul Hensey and Nicolas de Watrigant went to €95,000 to secure the half-brother to the stakes-placed Mohab (GB) (Sir Percy {GB}).

“He was a lovely individual and Lope De Vega is a proven sire who does it day in and day out. He's also out of a mare by Mr Greeley, which always adds a bit of brilliance to a pedigree,” said Hensey of the son of the unraced Princess Aurora, a half-sister to American listed winners Willard Straight (Lion Cavern) and Jesse's Justice (Lear Fan).

Commenting on the increased activity by Al Shaqab at the yearling sales this season, Hensey, who was appointed chief operating officer in June, added, “We've bought almost 40 yearlings. We were keen to support our own stallions and Sheik Joaan is very conscious of the fact that times are hard for breeders.”

Al Shaqab also bought lot 452, a filly by its freshman stallion Al Wukair (Ire) and from the family of another of its former stallions, Style Vendome (Fr), from the Fairway Consignment for €60,000.

Owner Manfred Schmelzer enjoyed success over the weekend in Germany with a French-bred when his juvenile filly Noble Heidi (Fr) (Intello {Ger}) won the G3 Preis der Winterkonigin and he sent his trainer Henk Grewe in pursuit of the day's second-top lot, a Rajsaman (Fr) colt who is closely related to that sire's dual Classic winner Brametot (Ire). The latter is now standing in Germany at Gestut Ebbesloh after spending his first two seasons at Haras de Bouquetot.

Lot 436, offered by his breeder Haras de la Perelle, is a son of the unraced Morning Sun (Ger) (Law Society {Ire}), who is a full-sister to the dam of Brametot as well as being a half-sister to Germany's pre-eminent stallion of the modern era, (Monsun {Ger}). This same family was represented in the one of the opening day's top lots, as Matauri Pearl (Ire) (Hurricane Run {Ire}), the dam of the €450,000 Sea The Stars filly, is a grand-daughter of Morning Sun's half-sister Morning Queen (Ger) (Konigsstuhl {Ger}).

Born To Sea (Ire) has undergone a semi-reinvention since being relocated from Ireland to Haras des Faunes in France, with a number of his offspring enjoying successful careers over jumps. Francois Nicolle, one of the country's leading National Hunt trainers, has added a yearling filly to his string in the shape of lot 514, a grand-daughter of the classy sprinter Superstar Leo (Ire) (College Chapel {GB}), whose family has featured prominently in France of late via the treble G1 Prix de la Foret winner One Master (GB) (Fastnet Rock {Aus}).

Nicolas de Watrigant, who bought the filly for €70,000 on behalf of the trainer said, “Francois Nicolle  has had success this year with offspring of Born to Sea, such as [listed hurdle winner] Born to Hold (Ire). He had seen her at Haras des Faunes and really wanted to buy her.”

The daughter of Speed Song (GB) (Fasliyev) was bred by the Tsui family's Sunderland Holdings and was consigned by Haras des Faunes, where Born To Sea covered a book in excess of 150 mares this year.

Among those stallions with first yearlings this season is the Derby winner Wings Of Eagles (Fr), who spent one season at the stud where he was born and bred, Haras de Montaigu, before being switched to Coolmore's National Hunt roster in Ireland. A member of his debut crop will be heading to the Melbourne stable of Danny O'Brien after being bought by Jeremy Brummitt for €60,000. The same trainer/agent combination has enjoyed notable success with northern hemisphere-bred Russian Camelot (Ire) (Camelot {GB}), the winner of two Group 1 races in Australia and favourite for this Saturday's G1 Cox Plate.

Bred by Mathieu Daguzan-Garros of Haras des Granges, the Wings Of Eagles colt (lot 432) is out of the Red Ransom mare Mix-feeling (Ire) and his 2-year-old half-brother Mexico City (Fr) (No Nay Never) was recently third in the G3 Killavullan S. for Aidan O'Brien and the Coolmore team.

“He wasn't just my pick of the day, he would have fitted in very well on day one,” said Brummitt. “He didn't need the update to make us follow the horse strongly. It is inconceivable that a horse who was good enough to win the Derby cannot command a full book of Flat mares in his first season, particularly when you look at some of the stallions he was up against.”

Brummitt has bought two colts in partnership with O'Brien at Arqana this week, the other being a colt by Intello (Ger) (lot 47) during Monday's opening session. The pair also bought eight yearlings at the Tattersalls October Sale.

Tina Rau was another to sign for a yearling by Wings Of Eagles, also at €60,000. The first foal of the Medicean (GB) mare Sajida (Fr) (lot 485) hails from the family of Arc winner Sagamix (Fr) and also that of Newsells Park Stud's star broodmare Shastye (Ire), whose Galileo (Ire) yearling colt recently topped Book 1 of the Tattersalls October Sale at 3.4 million gns.

Rau said of the February-born colt, who will be trained in Chantilly by Nicolas Clement, “He was my pick of the day, an absolute star horse. Overall I have been very impressed with the yearlings by Wings Of Eagles. I didn't necessarily have him on my list of horses to follow but they all seem to have a lot of quality to their coat and skin, and I always think that's a good sign. This one was the easiest-moving of the Wings Of Eagles bunch and his pedigree makes easy reading too. He's obviously going to take a little bit of time but I am very glad we got him.”

Part 3 of the October Sale gets underway from 2pm on Thursday, and the sale concludes on Friday.