Looking for a Mayo Miracle 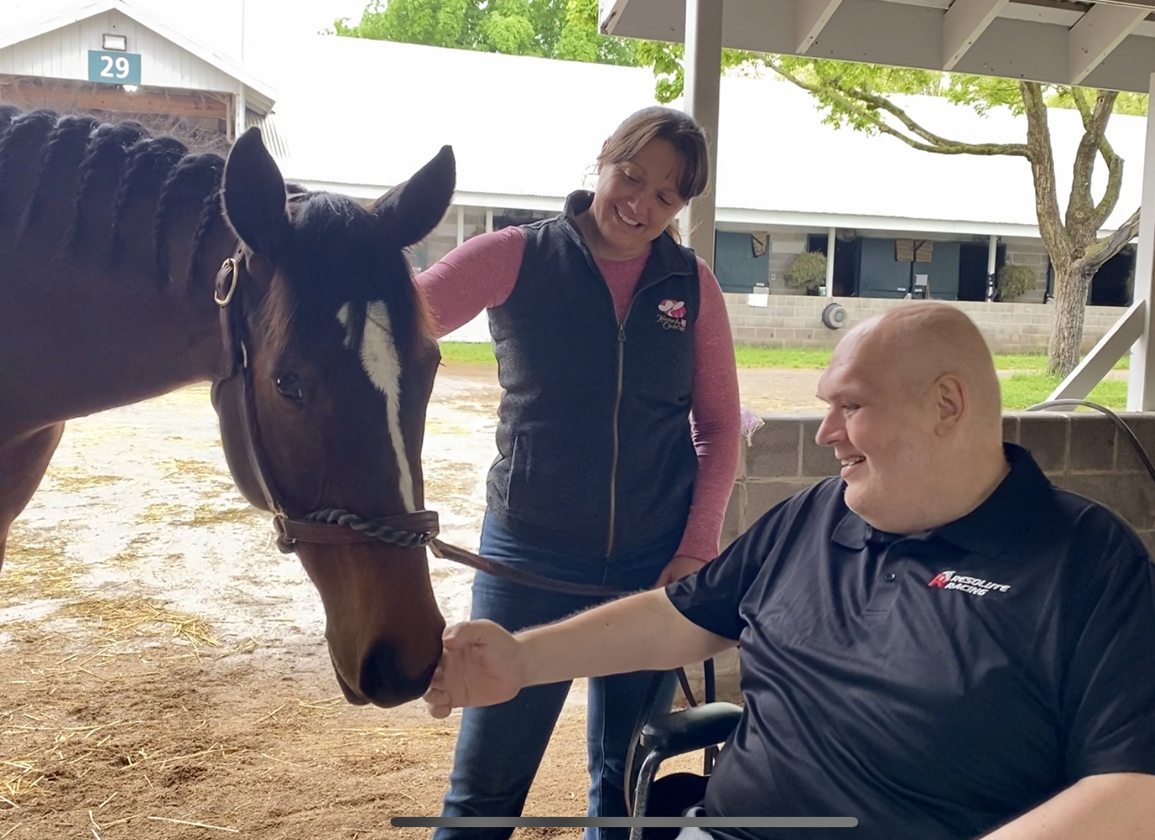 Scroll to watch our feature on Joe Trawitzki and his filly, Mayo Miracle.

Joe Trawitzki is a trainer's dream.

As an owner, he takes the bad news with the good, he always puts the horse first and of course, he shows up at the barn with two dozen doughnuts in tow.

But while Joe is eagerly anticipating the debut of his 2-year-old filly this year, he's not sure if he will have the opportunity to see her reach the starting gate.

On May 21, 2020, the Wisconsin native went to the hospital for what he thought was a simple gallbladder surgery, but in the operating room, the doctors discovered that his liver was riddled with cancer.

“They weren't sure where the cancer came from, but they knew it was advanced and they knew it was stage four,” Joe explained. “This was during COVID, so I spent the night by myself in the hospital  afterwards. The next morning we met with a local oncologist and she's a wonderful person, very up-front, and I asked her if she were me, what would she do. She said, 'I would take the next six months and prepare to die.'”

In Joe's mind, that wasn't a good option. He and his wife Alyssa were newlyweds and Joe wanted more time to be a husband, so he gave up his law practice and started chemotherapy.

“It was really weird because you think, 'What am I going to do with myself for the next couple months, years or whatever time I have left?' You've got to find something to focus on or else you just sit and look at the walls and drive yourself crazy.”

With no job to keep himself otherwise distracted, Joe turned to the sport he fell in love with as a child.

“My grandmother and aunt took me to Arlington when I was five,” he recalled. “They told me to pick out either a name or a number to bet, and at the end of the day they gave me two one-dollar bills. I thought I was rich. From there I was hooked.”

Since then, Joe has been checking off items on his horse racing bucket list. First he attended the Kentucky Derby, then he got himself a claimer and eventually he joined a few partnerships.

“One thing leads to another and the next thing you know, you have 10 horses at the track and it just kind of grows out of control,” he admitted with a laugh.

One of his favorite racing moments  was when one of his syndicates had the opportunity to run at Royal Ascot.

“I had been dating Alyssa for about six months and I asked her if she would like to go to London. She was like, 'In a year?' And I said, 'No, in three weeks.' I hadn't even met her parents yet. So she thought I was crazy, but we got to Ascot and she loved it. We had the best weekend ever.”

“We were the first race, so we were in the paddock as the Queen came by in her carriage,” Joe remembered. “This was Alyssa's first time at a track so I had to explain to her that not every time was going to be like this. When I went to place my bet, I forgot about the conversion from pounds to dollars and I had to run to the ATM. It was a mess, but it was a lot of fun.”

That event helped Alyssa fall in love with racing too, and the couple got married at Keeneland three years ago.

When Joe received the diagnosis last year, he was able to get into the Mayo Clinic in Arizona. There they discovered that Joe was living with pancreatic adenocarcinoma.

“You look at the stats of pancreatic cancer and it's not good,” Joe said. “But when we met with each of the doctors at the Mayo Clinic I would say, 'We're from Wisconsin and we're looking for a Mayo miracle. While meeting with the third or fourth doctor, we started talking about horses and I told him we were going to buy a horse and we were going to name it Mayo Miracle.”

He decided to venture from under the umbrella of racing partnerships to go out and find Mayo Miracle on his own. Remembering a TDN article on Cherie DeVaux, he reached out to the up-and-coming trainer. 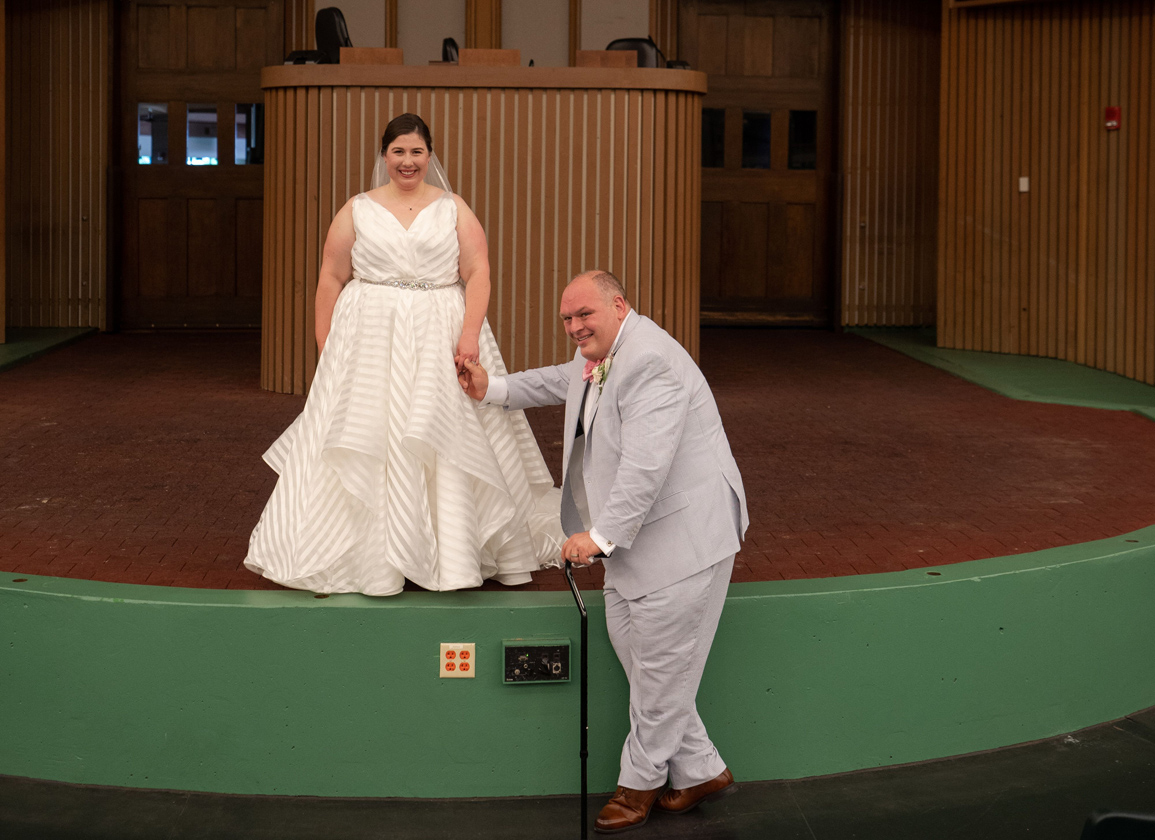 Joe and Alyssa in the sales ring at Keeneland on their wedding day. “It's a very, very special place,” Joe said of the Lexington track. |photo courtesy Joe Trawitzki

“She had one quote I'll never forget, she said, 'I'll always be truthful with my owners,'” Joe said. “At that point, I'm trying to transition to where Alyssa can take over the racing if she wants to stay in it, so I wanted to hook her up with someone we could trust. I called Cherie and she told me that not all horses are racehorses, so she wasn't going to let me waste money to pay my bills if they couldn't run.”

So off they all went to the Keeneland September Sale. There Joe learned that DeVaux's husband was bloodstock agent David Ingordo. But even with Ingordo and DeVaux both scouring the sales grounds, they walked away empty-handed.

“The difficulty was that David's standards are so high and he usually is getting a bit higher clientele than us, but to his credit, he would not adjust his eye and he would not accept any faults,” Joe said. “He was looking for the perfect horse for us, but the problem was we couldn't afford the perfect horse. When we walked away from the sale, the look on David's face was so hurt. He was so ashamed and sorry he couldn't buy us a horse, but I told him it was part of the game, the prices were high and I had learned a lot.”

DeVaux and Ingordo put their heads together afterwards and then reached out to Joe to ask if he might be willing to form a 50-50 partnership with them.

“I was just in awe because we had just met, you know, and with where they're at in the industry, it was a real honor to partner with them,” Joe said.

So with an upgraded budget, DeVaux and Ingordo attended the Fasig-Tipton October Sale and landed on an Astern (Aus) yearling out of Short Squeeze (Lemon Drop Kid). The filly's dam was a half-sister to graded stakes winners Last Gunfighter (First Samurai) and Tiger Moth (Street Sense). 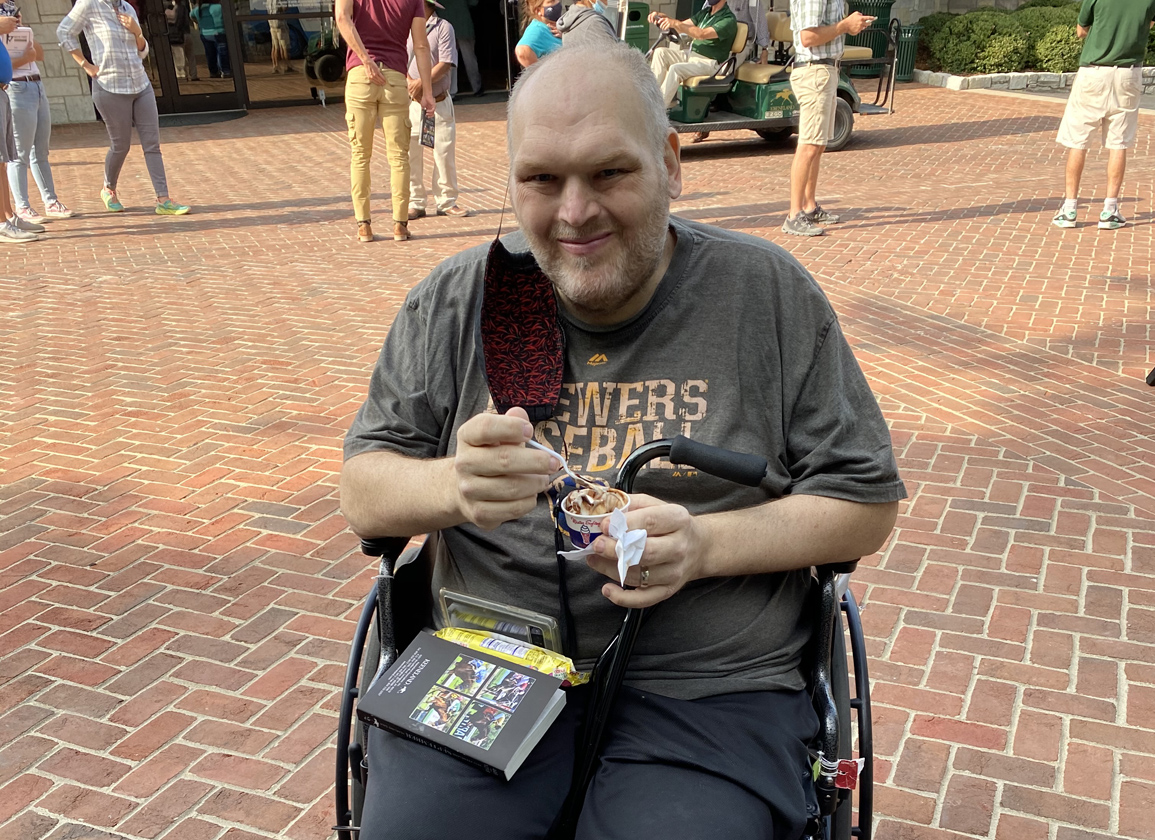 Joe at his first Keeneland September Sale. “I didn't know a lot, but I knew enough to be dangerous,” he said afterwards. | photo courtesy Joe Trawitzki

Their $65,000 purchase was sent to Mayberry Farm in Ocala for her early training and arrived at DeVaux's barn at Keeneland last month.

“She's been pretty straightforward,” DeVaux reported. “She's a cool, calm customer, she doesn't do anything wrong and she is learning her job as a racehorse pretty well. With all my 2-year-olds we give them as much time as they need, but hopefully by the middle to end of summer, she'll be getting to the races.”

When Joe explained his thoughts on a name for the filly, the idea resonated with DeVaux.

“When Joe first came to visit the filly, he was telling me how important it was for him to get his message out in naming this filly to pay respect to the Mayo Clinic and bring awareness to pancreatic cancer,” DeVaux said. “My older sister actually had pancreatic cancer 20 plus years ago and she survived, which is a very rare instance in this type of cancer.”

As Joe nears the one-year mark since his diagnosis, as well as six months past the time frame doctors originally gave him to live, he is busy planning for Mayo Miracle's first start.

“One of our goals with Mayo Miracle is that we want her to be a party horse,” he said. “If we can get all my friends to the track to watch, maybe it brings in a few more fans to the industry. Who knows where it's going to go? Whatever this horse is for other people, that's wonderful. Hopefully she is successful. Worst- case scenario, we bought a horse and had some fun.”

Joe said that he and Alyssa are making plans to design Mayo Miracle's silks to display a purple cancer ribbon. A significant amount of her earnings will go towards both research at Mayo Clinic, as well as the Hope Fund at Mayo Clinic, a fund set aside for those who cannot afford travel costs and medical fees associated with treatment at the medical center.

Joe also credits his home hospital in Green Bay for what they've done for him, joking that his next horse will be raced in their honor and named 'Ain't Dead Yet.' 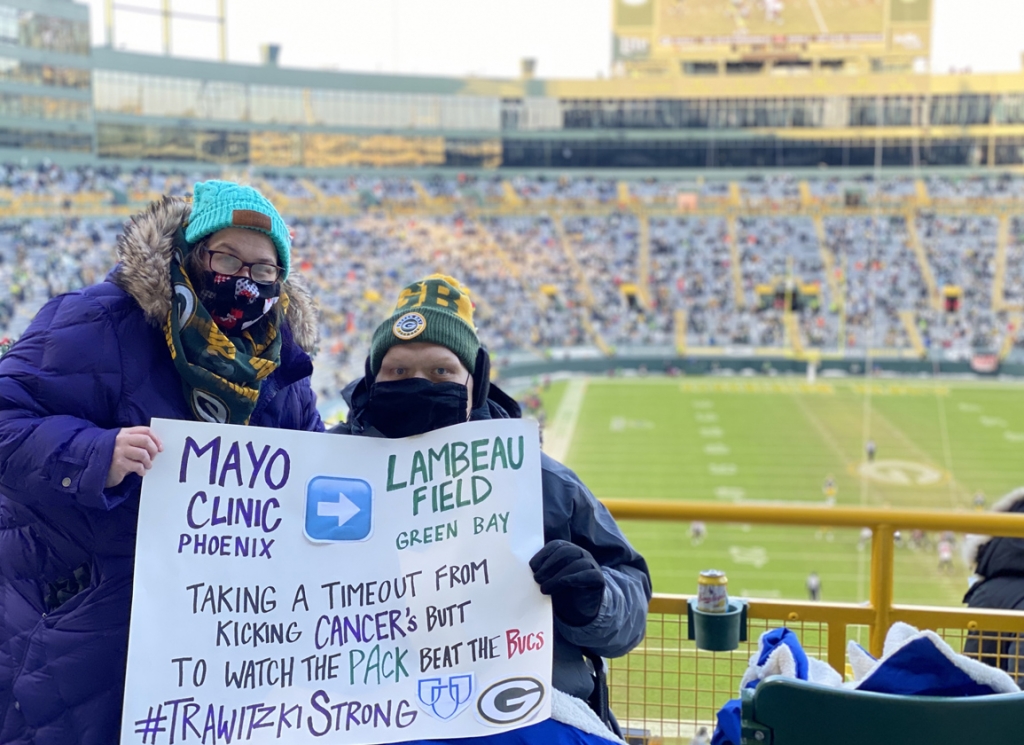 He continued, “For the people in the support system of someone with cancer, the thing you want them to know is that if you're there in the beginning, stay with me until the end. People say, 'I've got your back' or, 'You're going to fight this,' and yeah, we're going to do it, but we need to do it together.”

Under DeVaux's watchful eye, Mayo Miracle is now starting to put in her first breezes at Keeneland.

“I really want this filly to be something special for Joe and Alyssa,” DeVaux said. “It's too early right now to tell her level of ability. This filly has a purpose as a racehorse, but she also has a purpose for spreading a message and a story. If somebody is following this and it helps them in some way, maybe they're going through the same thing Joe is going through, they can have a connection with something other than an illness.”

In a text Joe sent to DeVaux on his way home from visiting Mayo Miracle last month at Keeneland, he reflected on what the journey with this filly has meant to him already.

“It's crazy because the idea behind Mayo Miracle was just a saying to the doctors that turned into the thought of getting a party horse that friends could enjoy and it could become something to keep me positive, distract from the negative and provide hope that this cancer is survivable so I can watch this horse and buy others. I really am not sure what this horse will mean to others or how she will perform on the track, but I hope it will be fun and that I am here to see it.”