Longines HKIR Notebook: Inferno Out of the Sprint 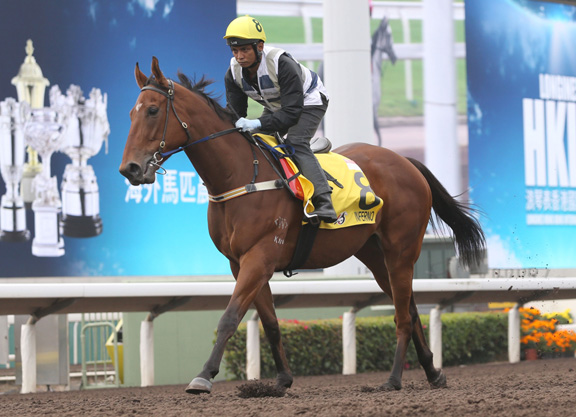 Very little went as planned for Inferno on his trip over to Hong Kong. The air conditioning in the horse float that transported Inferno from Kranji Racecourse to Changi Airport about 30 minutes away broke down and the horse was subjected to the heat for three hours. He then had to endure the four-hour flight up to Hong Kong and making matters worse, connections were dealing with a foot issue in the 24 hours prior to departure. Inferno galloped well over the Sha Tin all-weather Monday morning, but the decision to come out of the Sprint was not a difficult one for trainer Cliff Brown.

“Inferno became distressed after the air-conditioning in his box broke down. He was melting in the heat at the airport for three hours,” Brown told the Singapore Turf Club's Michael Lee. “Luckily, [Singapore Turf Club veterinary surgeon] Dr Dan Shaw and [assistant-trainer] Tony Lane were able to hose him down and sedate him as he was getting so upset.

“From the way the trip has unfolded, it was a really bad start, and once he arrived in Hong Kong, things got worse when he didn't eat properly for three nights. To top all that, the day before he left, he had a small foot issue. I thought it would get right, and he actually cantered fine yesterday, his work was fine.

“But all in all, he was not coming right, and as I needed him to gallop tomorrow, I've decided to pull the pin early. We're coming home. The horse already had this foot issue, and in hindsight, maybe I could have pulled the pin there and then,” Brown concluded.

Inferno is the winner of eight of his nine starts in Singapore, including an impressive score in the Lion City Cup Oct. 25. Hong Kong's second leading rider Zac Purton now picks up the mount on Amazing Star (NZ) (Darci Brahma {NZ}), who moved off the reserve list and into the field when Perfect Match (Aus) (Not A Single Doubt {Aus}) was taken out Monday. Also joining the field is Stronger (Aus) (Not A Single Doubt {Aus}), who gives trainer Douglas Whyte a first runner at the HKIR.

A pair of locally based runners that will carry favourtism in their respective races put in some fast work over the turf course Tuesday.

Golden Sixty (Aus) (Medaglia d'Oro), who figures a warm choice in the G1 Longines Hong Kong Mile, went five furlongs on the turf and was allowed to roll through the final 400 metres, clocking a final sectional of :23.2 with regular rider Vincent Ho in the saddle.

“Both Vincent and me are pleased with his trackwork performance this morning,” said trainer Francis Lui, who saddled Lucky Bubbles (Aus) (Sebring {Aus}) to a runner-up effort in the 2016 Sprint, but is still in search of a maiden HKIR winner. “We will arrange him another gallop this Friday and that will be an easy work.”

Classique Legend (Aus) (Not A Single Doubt {Aus}), last-out winner of The Everest at Randwick Oct. 17 and the likely choice in the G1 Longines Hong Kong Sprint, was a modest third in a 1000-metre barrier trial last week, but looked to have improved from that after finishing 800 metres of work in :23.1 Tuesday morning.

“He had a nice half-mile gallop, he had a companion lead him out and he quickened up nice, he ran home in 23 (seconds) and he did it nice and easily,” said trainer Caspar Fownes. “Vincent Ho, who galloped him this morning, was very happy with him– he's getting there now, he looks good–I can't do any more with him.”