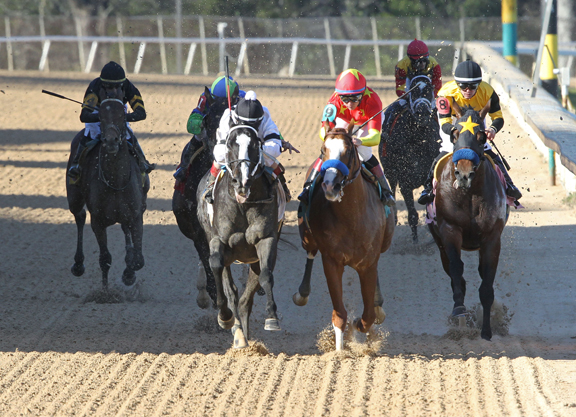 A two-time stakes winner at Remington late last term, Long Range Toddy had settled for second and third, respectively, in two prior local stakes attempts. He stepped up when it mattered Saturday to beat the toughest foe he'd ever faced in previously unbeaten and highly regarded Bob Baffert trainee Improbable.

The Horton homebred romped at second asking by 5 3/4 lengths when stretched to a mile in Oklahoma Sept. 28, and handled an immediate class hike with aplomb, annexing the Clevor Trevor S. over seven panels and the Springboard Mile Dec. 16. He was beaten a neck in the local Smarty Jones S. Jan. 25, and was third with slight traffic trouble in the track-and-trip GIII Southwest S. Feb. 18.

The blaze-faced dark bay broke on top and led into the first turn as Improbable was hung very wide and seemed to be climbing a bit. Reined in to sit third just off the speed down the backside, he lost another spot when Extra Hope (Shanghai Bobby) went for an early run and was back to fifth into the bend once Improbable was given his cue to get closer out in the clear. Veteran Jon Court sat chilly on Long Range Toddy as they lined up across the track hitting the stretch, and he guided his mount into the clear as Improbable took over. The chalk appeared all-in passing the sixteenth pole, and Long Range Toddy ran him down to seize command in the final few strides.

“The horse is doing extremely well. He stepped up,” said trainer Steve Asmussen, fresh off a score in the GIII Azeri S. with Midnight Bisou (Midnight Lute) one race earlier. “Jon gave him a beautiful trip today and I love how he earned it late. The horse is extremely kind. Jon worked him the other day (Mar. 10, 4f, :53, 89/93) and his comment was that he was push-button. The horse was away well and got a good spot. They went about their business and he relaxed down the backstretch. You could tell coming into the stretch he was loaded. He waited until they all lined out, didn't waste any ground and wheeled him out late like he should and got rewarded for it.”

Long Range Toddy is the third graded winner for his young expatriated stallion. His dam Pleasant Song (Unbridled's Song) is out of MGSW Pleasant Temper (Storm Cat) and was a $700,000 KEESEP purchase by Willis Horton before winning three times on the grass. Machmer Hall bought Pleasant Song carrying a full-brother to Long Range Toddy for $22,000 at the 2016 Keeneland November sale.