Long Layoff No Problem for Greenpointcrusader 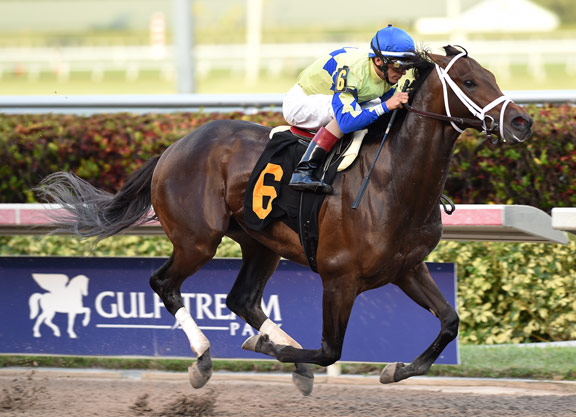 GREENPOINTCRUSADER (c, 4, Bernardini–Ava Knowsthecode {GSP, $156,596}, by Cryptoclearance), an impressive winner of the 2015 GI Champagne S. at Belmont, checked in seventh in champion Nyquist (Uncle Mo)’s GI Breeders’ Cup Juvenile that year. Runner-up to Mohaymen (Tapit) in the GII Holy Bull S. just short of a year ago, the dark bay was last seen finishing a non-factor seventh in the GII Louisiana Derby in March of 2016 for previous trainer Dominick Schettino and was transferred to Todd Pletcher. Away well from the outside post in this six-horse affair, the 6-5 chalk pressed Flashy Jewel (Flashy Bull) from a close-up second through early fractions of :24.35 and :47.58. Ranging up two wide turning for home, the $575,000 KEESEP buy swept by the pacesetter in mid-stretch and skipped clear to a 2 3/4-length victory. A son of blue hen mare Ava Knowsthecode, the winner is a full-brother to Algorithms, GSW, $301,500; and a half-brother to Justin Phillip (First Samurai), GISW, $1,293,437; Keyed Entry (Honour and Glory), MGSW, $322,852; Successful Mission (Successful Appeal), GSW, $353,043; and Alex’s Allure (Sky Classic), SW. Ava Knowsthecode is also responsible for the once-raced sophomore colt Jon Knowsthecode (Giant’s Causeway), who was a $300,000 KEESEP yearling, and a juvenile colt by Giant’s Causeway, who brought $100,000 at Keeneland September. The 23-year-old mare did not produce a foal in 2016, but was most recently bred to Bernardini. Lifetime Record: GISW, 7-3-2-0, oftline$470,300. Click for the Equibase.com chart or VIDEO, sponsored by Fasig-Tipton.