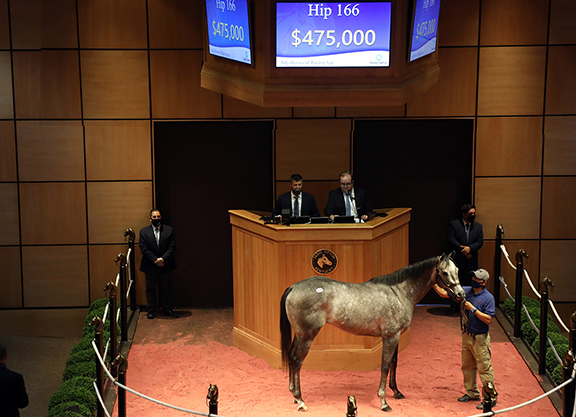 Early action seemed tepid, but bidding picked up noticeably throughout leading to a lively day of business at the Fasig-Tipton July Horses of Racing Age Sale in Lexington Monday.

“There was lots of activity at all price ranges and a lot of horses got moved and found new opportunities with new buyers,” said Fasig-Tipton President Boyd Browning. “The sale was well-attended. Veterinary activity, which is one of the things that I always look at to kind of evaluate pre-sale interest, was higher this year than last year. We have now had two sales in a row that should provide some confidence in the marketplace.”

The 2-year-old County Final (Oxbow), coming off a runner-up effort in the GIII Bashford Manor S., achieved the night’s highest bid when selling to West Point Thoroughbreds for $475,000. The gray colt was one of six to sell for $200,000 or over on the night.

“It’s rational, but it’s a legitimate marketplace,” Browning said. “It is a balanced market that is equitable for buyers and sellers alike.”

Monday’s auction, coupled with positive results from Fasig-Tipton’s Midlantic 2-Year-Olds in Training Sale two weeks ago, should help to stabilize the market ahead of the fall yearling sales, according to Browning.

“All in all, I am certainly much more encouraged today than I was three weeks ago because we’ve demonstrated with these two sales that there is a viable, legitimate marketplace that exists,” Browning said.

Ennis Scores by a County Mile

Trainer John Ennis heads into the yearling sales each fall working on a strict budget and hoping to take home a yearling who will have success at the track before returning to a horses of racing age auction. The Irishman worked his plan to perfection with County Final (Oxbow) (hip 166), purchasing the colt for just $9,500 at last year’s Keeneland September Yearling Sale and selling him Monday at Fasig-Tipton for $475,000 to West Point Thoroughbreds. In between sales, the gray colt broke his maiden over the turf at Churchill Downs and finished second over the main track in the June 27 GIII Bashford Manor S.

“It was easy to like him really,” Ennis said after watching County Final go through the sales ring Monday. “He looked like a smaller version of what he looked like today. He was a top physical with a professional look to him and a great walk. I’m sad to see him go, but it’s something we’ve got to do.”

Asked about the colt’s bargain basement price last year, Ennis said, “Oxbow, unfortunately, is not that commercial and in the sales ring, especially with yearlings, they want to buy commercial sires. With my budget, buying inexpensive yearlings, I have to go on physicals.”

Ennis was happy to see the colt sell, but he and his partners were prepared to take him home if the price wasn’t right.

“I had a couple of other partners on him and they didn’t mind if we kept him,” he explained. “They would have happily taken him home and taken him to Saratoga and places like that because he’s a runner. They put a high reserve on him and we thought we probably wouldn’t get that because the market didn’t seem that strong. But it was fantastic. I’m over the moon.”

“It’s very hard to pinhook yearlings to 2-year-old sales,” Ennis said. “You only get one shot at going a furlong in :10 flat or whatever you need to do and the X-rays have to be super correct at the sales. I feel like, if you buy an inexpensive yearling who looks like a runner and if you win a maiden special weight at some place like Churchill or Keeneland and improve on the next run, no matter who he’s by, they will come and buy him. For me, with my budget, that’s the only way I can do it. I’d love to keep the horse, but this is what I do every year. I love the horse and he’s a fantastic horse. But now it’s back on to September.”

Country Mile will be transferred to the barn of trainer George Weaver with plans to run at Saratoga, according to West Point’s Terry Finley.

“I hope he ends up as a runner, but he’s shown he has a lot of talent,” Finley said. “Everything just fell into place with him and he vetted well. We are going to take a shot. We find that our partners are very open to horses like this that have shown a good bit of ability. It’s very exciting that he ran so well on dirt and turf. We didn’t think he’d bring that much in the ring, but it is what it is.”

Recent maiden winner Per Capita (Tapit) (hip 85) will join the Brunetti family’s Red Oak Stable after the operation’s racing manager Rick Sacco went to $325,000 to secure the strapping chestnut from the Gainesway consignment Monday at Fasig-Tipton. The 4-year-old, bred by Gainesway and racing for Gainesway and Peter Brant, graduated in his fourth lifetime start at Churchill May 24 for trainer Chad Brown. He is out of Successful Outlook (Orientate) and is a full-brother to multiple graded stakes winner Anchor Down and graded winner Iron Fist, as well as a half to Grade I winner Sweet Lulu (Mr. Greeley).

“It’s a beautiful page, a very good family and Tapit jumps out at you,” Sacco said of the colt’s appeal. “His race at Churchill was very impressive, not in only in the way he did it, but he ran a 5 3/4s on the sheets, which is kind of extraordinary for a maiden winner, even though he is four.”

“We are trying to buy some racing horses to fill some gaps in our stable,” Sacco said. “We have some good older horses and we are just trying to fill some gaps. This horse came up with all of the curb appeal of the pedigree and then, when I dug into it a little bit more, with the sheet figure that he ran and his physical–he’s a very powerful-looking horse.”

As for where the colt may start next, Sacco said, “I would say we will most likely come back in an a-other-than at Saratoga as the next progression. We haven’t decided who is going to train the horse yet. We wanted to get our hands on him first and then we will figure it out.”

Bloodstock agent Pete Bradley, bidding over the phone while in Ocala for the OBS July Sale, went to $275,000 to acquire the graded-placed Impeccable Style (Uncle Mo) (hip 53) on behalf of an undisclosed client. The 3-year-old filly was second behind Shedaresthedevil (Daredevil) in the July 8 GIII Indiana Oaks for the partnership of Gainesway, Catalyst Stable, Paul McInnis, Patty Slevin, LLC and Magdalena Racing and for trainer Ken McPeek.

“It’s not often that you get to buy a graded placed filly who has Oaks points,” Bradley said. “She has been very consistent and she appears to be a filly that is getting better and that’s what we look for when we try to buy a race filly. I think she is a beautiful framed filly. She is a little on the light side, but I’d rather have one on the light side than too heavy. She has some quality to her and obviously she can run.”

A maiden winner at Churchill last September, the dark bay filly was fifth in the GII Rachel Alexandra S. and third in the Bourbonette Oaks earlier this year.

“We are going to give her a little bit of a break just because she will go to a new barn and I always think it’s a good idea to give them a couple of weeks before you do too much with them,” Bradley said. “And then we will point her to some races in September and October.”

Of the final price, Bradley said, “I thought in that price range, she was pretty good value. I think it’s a function of our market being off a little bit, I think she might have been a $350,000 filly last year. I wouldn’t say $275,000 is a bargain, but I’d say that it’s good value for what she is.”

The Wycoff family’s Three Diamonds Farm enjoyed a big day at Keeneland Sunday, winning two races including the GIII Transylvania S. with Field Pass (Lemon Drop Kid), and the operation was busy across town at Fasig-Tipton Monday night. Three Diamonds purchased nine horses at the auction for a total of $499,000.

“We thought there were a lot of nice horses there,” Jordan Wycoff said. “The races are definitely getting tougher because there are fewer of them and there are more horses in them, but we felt it was probably a buyer’s market at this time in the world. We love to race and wanted to go in to the sale like we would any other year, which is to try to buy some good horses that we thought were value that we could race with.”

Three Diamonds’ Fasig purchases were led by Journeyman (Animal Kingdom) (hip 56), who was purchased for $85,000 and is coming off a fourth-place effort in the July 4 GII Eclipse S.

“We like to run on the grass with [trainer] Mike Maker,” Wycoff said of the 4-year-old gelding’s appeal.

Wycoff continued, “There was a lot of Kentucky Downs in our mind as we were looking at these horses. And they might not let us on Saratoga, but we still like winning races there. So that all played a part in buying these horses.”

While the July sale started off slowly, it seemed to build momentum as the evening wore on.

“The sale got really strong at the end,” Wycoff agreed. “We were trying to bid on a few more late and got completely outrun, so we were happy we were able to strike a little bit early. Fifty hips into the sale, I think we had bought six at the time, I was shocked we were able to get those horses for that value and I thought we were going to get a few more. But in the last 100, we got outrun like crazy.”

Three Diamonds has had success buying out of the Fasig July Horses of Racing Age Sale in the past. The operation purchased Cross Border (English Channel) for $100,000 in 2018 and that 6-year-old is now graded stakes placed, while Go Noni Go (Get Stormy), purchased for $100,000 in 2017, won the GIII Bourbonette Oaks.