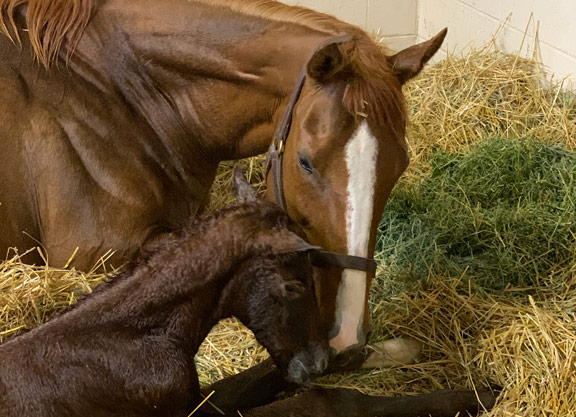 Weighing in at over 130 pounds, the filly was born chestnut with three white socks and a unique semi-circle on her forehead. However, the silver around her eyes and muzzle and flecked through her coat indicate she will turn gray like her famed sire.

“She was a very large foal and probably the longest legged foal Emma has ever had for us. She is the sixth of her foals that we have delivered,” said Lyon with the tones of a proud mother. “Before I went to the barn, I said, 'Let's see, this filly will be bright chestnut with a lot of white [like Emma's last three foals]. Everybody was laughing. When this filly first presented, she was darker with no big blaze and it became clear she had a lot of gray around her nose and eyes.”

The Arkansas native continued, “She has the most wonderful little odd marking on her forehead. It is like a little rainbow. I was laughing, saying maybe she came with her own tiara. She is very different looking [than Emma's past foals] in that respect. She is very tall and long and has great bone structure. When she fills out, she is going to be a big filly. I am very excited about her.”

Lyon has kept all, but one of Emma's foals since she purchased her for $2.1 million at the 2014 Fasig-Tipton November Sale–with the lone exception being the first, St. Patrick's Day (Pioneerof the Nile)–and the mare's newest offspring will also remain at Summer Wind for life.

“This is the third filly out of Emma that will remain in her legacy broodmare band here at Summer Wind,” Lyon said. “I have far too much emotion invested in Emma and I know that. A mare like her doesn't come around often. [Farm manager] Bobby [Spalding] said I will probably never have another mare like this and he is probably right. I am so grateful to have had the opportunity to buy her. She does everything right and is the ultimate mare.”

Lyon has tentative plans to send Littleprincessemma back to Tapit for the fourth straight year.

“The plan is to go back to Tapit, but I haven't officially made a decision,” the horsewoman said. “Emma is 14 now and I don't want to do anything to push her too hard. I want to wait and make sure she comes out of this okay before we breed her back.”

Since arriving at Summer Wind back in 2014, Emma has produced the aforementioned GSP St. Patrick's Day, who sold to Coolmore and is standing his first year at stud at Florida's Journeyman Stud. The following year, she produced her first Tapit filly, Chasing Yesterday, who gave Lyon her first Grade I win as an owner and is now pregnant with her first foal by Curlin.

Next up for Emma was the now-3-year-old full-brother to American Pharoah named Theprinceofthebes, who will eventually carry the Summer Wind colors. She was returned to Tapit the following season and had the 2-year-old colt Triple Tap, who is in pre-training with Eddie Woods.

“Triple Tap is with Eddie Woods and with all the questions floating in the air in regards to the coronavirus, Eddie is just giving him time. He is extremely happy with the colt.”

Last, but certainly not least, Emma delivered another Tapit filly in 2019, who is now named Lasting Tribute in honor of Lyon's late husband Frank Lyon. Her sister Chasing Yesterday is also named in Frank Lyon's honor and they both share their mother's chestnut coat and flashy chrome markings.