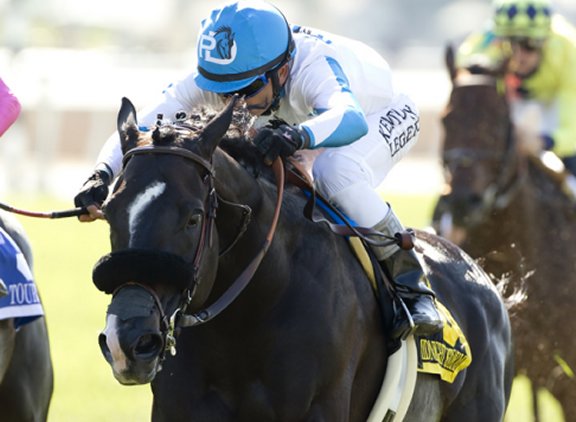 The Little Red Feather Racing Club has put together what is believed to be the first ever major racing partnership achieved through crowdfunding, and hopes it will prove to be a breakthrough event for a sport always hoping to attract new blood to the ownership ranks.

Little Red Feather's managing partner Billy Koch said the stable has raised about $300,000 through the website startengine.com. A total of 183 people have invested, each one paying a minimum of $500.

“This is really something that we think has a chance to be special and bring more and more people into the game,” Koch said. “If they just get their toes wet and if we can put them in on a couple of good horses, all it will take is two or three guys to get together and say 'let's do this more, let's buy some horses on our own.' That's what we're trying to do. When we set out with Little Red Feather years and years ago one of our goals was to increase the popularity of this sport and grow this game through ownership. We want to bring more owners into the game. We're really proud of and thankful to all our partners who have made this crowdfunding project so exciting. Also, thanks to Santa Anita, which has worked with us. They said any time we have a horse running from the crowdfund, they're going to give us tickets no matter how many people come. It should be awesome.”

With the $300,000, Koch hopes to buy minority shares in several horses, including stakes runners. The belief is that the crowdfund partners will have the best experience if they can say they own part of a top class horse–even if it is a very small part.

“We're going to try to put people in on as many horses as possible,” Koch said. “We're going to be buying minority interests in horses. We've already talked to some owners about stakes type horses, allowance type horse, that we can buy a 5% or 10% share of. That way these people can get a taste of the top. I also want to see who is on the [GI Kentucky] Derby trail and if that includes someone like Paul Reddam or [B.] Wayne Hughes, I really have a feeling they'll sell us a really small piece of a horse that is on the Derby trail. It would be amazing and amazing for the game if we could get these people in on a Derby horse.”

While there have been racing clubs organized by racetracks, including Churchill Downs, Koch said the primary difference is that the partners in the clubs do not own an actual equity interest in the horse.

“With our fund you own a piece of horse, there is equity,” he explained. “If the horse earns or is sold, you stand a chance to make money. With everyone owning such a small percentage we don't anticipate there will be millions paid out, but in racing clubs you put in X and the most you can actually make is X. You can't make X plus.”

In other news from Little Red Feather, recent GIII Native Diver S. winner Midnight Storm (Pioneerof the Nile) doesn't appear to be a serious candidate for the GI Pegasus World Cup at Gulfstream. Trainer Phil D'Amato, Little Red Feather and co-owner Alex Venneri put the 5-year-old on the dirt in the Native Diver in an attempt to see if he could handle that surface as well as he does the grass. He did, winning by 7 3/4 lengths. He is already a Grade I winner on the turf, having captured this year's GI Shoemaker Mile. Some thought the Native Diver was an attempt to prove that the horse belongs in the Pegasus, but Koch said the owners have smaller goals.

“We know the Pegasus is out there, but it probably wouldn't be our first choice unless someone comes to us with a very nice lucrative deal,” he said. “To take on California Chrome (Lucky Pulpit) and Arrogate (Unbridled's Song), let's put it this way, we have smaller fish to try. We're all on the same page and our goal is to win a Grade I stake on the dirt in 2017 with him and I'm not sure the Pegasus World Cup is necessarily the best race to go after. We know it's there and anyone who has a slot and doesn't have a horse knows about Midnight Storm.”

Koch said the ownership team has been contacted by a handful of slot holders seeking to make a deal. He added that it's more likely that Midnight Storm will be pointed to races like the GII San Pasqual S. and the GI Santa Anita H.

He also revealed that Little Red Feather has bought a minority interest in Lightstream (Harlan's Holiday) and she will run next in the GI La Brea S. at Santa Anita on opening day Dec. 26. The Brian Lynch-trained filly won two graded stakes at Keeneland this year, the GII Lexus Raven Run S. and GIII Adena Springs Beaumont S.