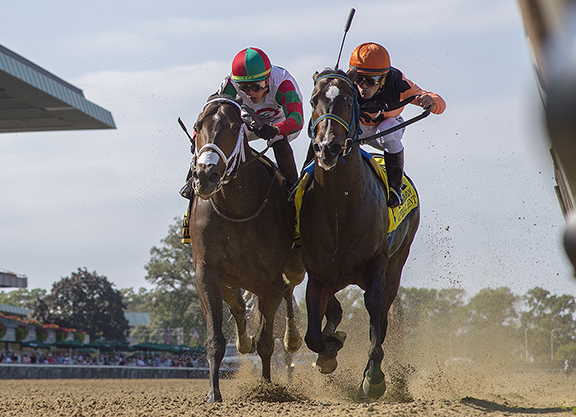 The fleet-footed Imperial Hint (Imperialism) proved he may be little, but he sure is fierce with a gutsy title defense in Belmont's GI Vosburgh S. Saturday, securing a spot in the gate for the GI Breeders' Cup Sprint at Santa Anita Nov. 2 in the process. Hammered down to 1-9 favoritism in a field scratched down to four, the dark bay took up his customary position on the front end and was chased by GISW Firenze Fire (Poseidon's Warrior) through a blazing first quarter in :22.11. Clocking a half in :44.65, he was confronted by Firenze Fire in mid-stretch and the stage was set for a battle to the wire. Firenze Fire briefly headed Imperial Hint, but the chalk refused to be denied and called upon all of his class, boxing back at his rival in the final strides. The duo hit the line together in a photo too close to call, but it was only a few moments before Imperial Hint was declared the winner by a determined head.

“He has so much heart,” said trainer Luis Carvajal, Jr. “This is when you see when a horse has heart. I knew he always did. It seemed like he was comfortable, and he was going to make it look easy, but Firenze Fire came back on the outside and he got a surprise from that horse. He's small but you can see he has heart.”

As for the Breeders' Cup, the conditioner said, “We'll go back to Monmouth Park and evaluate the horse and make sure he's good. We'll resume training and hopefully we'll see him at Santa Anita and leave in the middle of October or something like that. You don't have to do much now after this race. This will be enough.”

“It was unbelievable,” said winning rider Javier Castellano. “You never know in this game, nothing is for sure. You have to ride your race, and this is a great horse. I loved the way he did it. He fought all the way to the end. He didn't want to get beat. I give all credit to the horse and the trainer, he did a great job. Now, we have the Breeders' Cup, and I'm looking forward to it.”

Irad Ortiz, pilot of runner-up Firenze Fire, said, “He passed [Imperial Hint] and the other horse came back on him. He tried to fight back. There was no speed in the race except the horse to beat, so I had to go for it. I took my horse out of his place too early. You don't want to do that, but I had to do it. I thought it was a little early to try and jump on him. It worked out good turning for home and at the three-sixteenths pole, but it didn't work out in the end.”

Following wins in the GII True North S. and GI Alfred G. Vanderbilt H. with a victory in the Vosburgh last year, Imperial Hint finished third to two-time Eclipse winner Roy H (More Than Ready) as the favorite in the Breeders' Cup Sprint last November at Churchill Downs. Kicking off 2019 with a third-place finish as the favorite in Tampa's Pelican S. Feb. 16, he was sent to Meydan, where he filled the show spot yet again in the G1 Dubai Golden Shaheen S. Mar. 30. Given a breather upon his return Stateside, Imperial Hint returned to winning ways with a decisive four-length score in the Vanderbilt at Saratoga July 27, a race in which divisional leader and next-out GI Forego S. winner Mitole (Eskendereya) finished third.