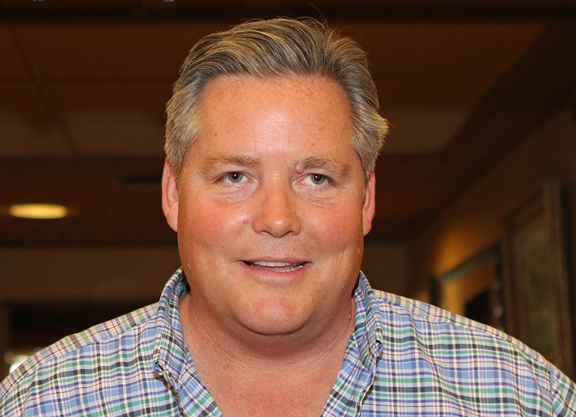 The 3-year-old pacing gelding Captain Barbossa didn't look that good on paper in Thursday's Little Brown Jug, one of harness racing's most prestigious races. He was 0 for 11 on the year and 3 for 25 lifetime and was facing some of the best horses in his division. Even co-owner David Anderson conceded that victory seemed unlikely.

But Captain Barbossa came through, finishing second in the first heat and then winning the final by 1 1/2 lengths. He may not have been the best horse in the race, but he had the hottest owner. Since the first day of the Keeneland September sale, Anderson, a self-described “little guy from Canada,” is on a run he never could have imagined.

“I'm in quarantine now and I'm ready to bust out and buy a lottery ticket,” he said from his home in Ontario. “That's how lucky I feel right now.”

It started on the first day of the Keeneland sale when his Anderson Farms sold a Medaglia d'Oro filly out of Orchard Beach (Tapit) for $1.6 million to Shadwell. It was the most ever paid at auction for one of his horses. Six days later, a horse he bred, Gretzky the Great (Nyquist), won the GI Summer S. at Woodbine, which is a “Win and You're In” race for the GI Breeders' Cup Juvenile Turf. Then came his win in the Jug.

The streak of good results continued Sunday when another horse Anderson bred, Hard Not to Love (Hard Spun), was a late-closing second in the GII Zenyatta S. at Santa Anita.

“I've been around this business long enough and having grown up in it, I know the highs are so high and the lows can be so low,” he said. “When you are fortunate enough to have a run like I had you just kind of sit back and enjoy it. You always know what is around the corner.”

While luck is often involved when someone goes on a tear like this, Anderson's streak is the result of years of planning. He took over Anderson Farms when his father, Bob, died in 2010 and hit the reset button. He sold every mare he had but one and would also decide to cut back on the farm's Standardbred operation.

His plan was to focus on quality. He now has 25 mares, which, he says, is a threefold increase from what he had just four years ago.

The first foal out of Orchard Beach was bought for $1.1 million by Coolmore and became a Group III winner in England, so Anderson had high expectations when the dam's latest yearling entered the Keeneland ring.

“When you get it to that level at Keeneland, where you have the biggest owners in the world in on her, it becomes a question of who wants her most,” he said. “Did I think she was a $1-million filly? Absolutely. She's the best filly I ever raised and certainly the most athletic. I was very proud and very humbled and thrilled that Shadwell got her.”

Anderson sold nine yearlings at Keeneland for a combined $2,433,000. The hope is that one or more will turn out to be as good as some of the stars produced by Anderson in recent years. Hard Not to Love is a Grade I winner who has earned over $530,000. Anderson also bred Wonder Gadot (Medaglia d'Oro), the 2018 Queen's Plate S. winner whose earnings topped $1.5 million.

“I don't think of myself as being a big breeder,” he said. “I have a small broodmare band and we're kind of grassroots people. We do it old school. I have surrounded myself with the best people and we've been very, very lucky.”

Standardbreds were a major part of the Anderson operation under Bob Anderson. But his son decided to focus his attentions on breeding Thoroughbreds and got out of the Standardbred game. When the Thoroughbred operation got to be on solid footing, he ventured back into harness racing, starting at the 2017 sales.

Anderson and partners paid $70,000 for Captain Barbossa at the 2018 Lexington Selected Yearling Sale. Up until the Jug, it looked like the best they could have hoped for from the son of Captaintreacherous was that he would continue to pick up checks. He had made most of the major 3-year-old pacing events, but couldn't find the winner's circle.

“This horse has been such a bad luck horse in terms of the draws,” Anderson said. “We were a victim of bad draws. Maybe he's not the best horse out there but we always thought he was a good horse.”

To win the Jug a horse must qualify in a heat and then come back a few hours later to race in the finals. Captain Barbossa was sent off at 20-1 in his heat and managed to finish second. It was then that Anderson started to believe his horse had a serious chance of winning the final.

The Little Brown Jug is harness racing's most unique race. It is held on a Thursday afternoon as part of the Delaware (Ohio) County Fair. It doesn't have the biggest purse in the sport, but it is rich in tradition and, in non-COVID years, can attract crowds in the neighborhood of 50,000.

“There is so much history,” Anderson said. “It's a race that every owner wants to win. That trophy is such a unique trophy. Everyone in racing knows what it is and what it represents.”

This time Captain Barbossa got the perfect trip, sitting third behind the two heat winners who battled through fast early fractions. Driven by Joe Bongiorno, the gelding passed the tired leaders, took over approaching the far turn and could not be caught.

“The Little Brown Jug. What can I say? It's America's race,” Anderson said. “To win that and be on that wall with so many other great champions, so many other great owners , trainers and drivers, it's a real feather in my cap. I have a lot of people to be thankful for.”