Home » Archive » Shared News Europe » Lir Can Fly, But Can He Go The Mile?

Lir Can Fly, But Can He Go The Mile? 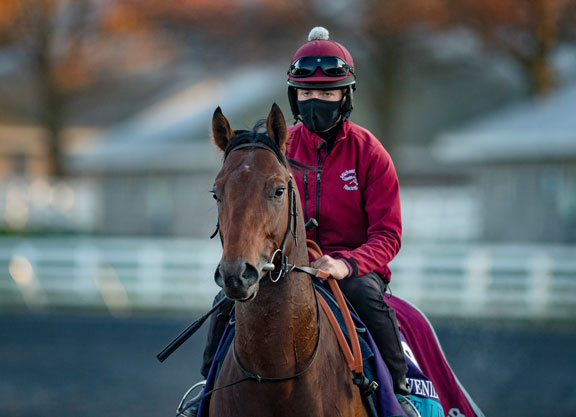 LEXINGTON, KY–Tuesday brought about another bright but cool morning in Lexington, and the European Breeders' Cup contingent-all bar the Ballydoyle brigade, which touched down in Lexington late on Monday evening and will be ensconced in quarantine until Thursday-had another opportunity to stretch their legs at Keeneland. The English and Irish Guineas winners Kameko (Kitten's Joy) and Siskin (First Defence) were among those who took to the training track for the second straight day, with Kameko once again catching the eye in a light gallop just as dawn broke. Siskin once again displayed his well being by throwing in a periodic hop and swivelling his head to take in all the sights as he went about his work, but the Ger Lyons trainee looked a picture of good health and appears to have taken his travels well.

G1 Prince of Wales's S. winner Lord North (Ire) (Dubawi {Ire}) was a standout among the John Gosden trio as he took to the training track alongside stablemates Terebellum (Ire) (Sea The Stars {Ire}) and Mehdaayih (GB) (Frankel {GB}), and the GI Turf contender traveled enthusiastically on the bridle without being overeager through an easy gallop. Trainer Ralph Beckett, having arrived in Lexington on Monday night, was aboard a pony to oversee his GI Juvenile Turf runners New Mandate (Ire) (New Bay {GB}) and Devilwala (Ire) (Kodiac {GB}). The G2 Royal Lodge S. winner New Mandate galloped freely ahead of his barnmate Devilwala, who was fourth in the G1 Dewhurst S. last out. Both horses are campaigned by owners relatively new to the game: Marc Chan bought New Mandate from a partnership headed by Beckett and Alex Elliott after a handicap win at Sandown in August, while Devilwala is among a talented bunch of 2-year-olds for Kia Joorabchian's Amo Racing.

New Mandate landed in gate two for Friday's Juvenile Turf at Monday evening's post position draw and Devilwala in 13, the only horse to the inside of Qatar Racing's The Lir Jet (Ire) (Prince of Lir {Ire}). The Lir Jet's trainer Michael Bell was on hand to supervise his first Breeders' Cup starter on Tuesday, having landed the evening before, and he was philosophical about the draw.

“The draw could have been kinder, but people seem to say you're better off drawn wide than out low. Time will tell,” he said. “I watched the [2015 Juvenile Turf] when Hit It A Bomb won here, and he won from post 14 and had a great ride from Ryan Moore, so we hope Oisin [Murphy] can do the same.”

The Lir Jet skipped over the training track for the second straight morning on Tuesday, and Bell said he is pleased with how the colt has taken his journey.

“He seems very happy in himself and he's eating well, which is the most important thing when they've traveled, because it can be a bit disruptive for them,” the trainer said. “But he looks in very good form when he's out on the track in the morning. We've kept him on the training track just to keep a lid on him but he couldn't have traveled better.

It was somewhat serendipitous circumstances that saw The Lir Jet land in Bell's yard earlier this year; the colt was bought privately by Bell's son Nick from pinhooker Robson Aguiar after the breeze-up sales were delayed in the spring. Sheikh Fahad came calling after The Lir Jet set a five-furlong track record when winning at Yarmouth on debut two days after racing in Britain resumed on June 3, and the colt carried Qatar Racing's colours when beating Wesley Ward's Golden Pal (Uncle Mo) in the G2 Norfolk S. at Royal Ascot. The Lir Jet, from the first crop of Ballyhane Stud's fellow Norfolk winner Prince of Lir, was somewhat unlucky to be beaten when second in the G2 Prix Robert Papin on July 19 and the G1 Phoenix S. on Aug. 9, and according to Bell didn't quite handle the Newmarket dip when fifth in the G1 Middle Park S. on Sept. 26. He steps up to a mile for the first time on Friday.

“He was a bit unlucky in the photograph in the Papin when it was heads up, heads down; the dice didn't roll the right way for him because he was in front just before and just after the line,” Bell said. “He ran in Ireland in the Phoenix S. and stayed on very well but got slightly hampered and finished off very well over six furlongs. He ran at Newmarket and was a bit unbalanced coming down the hill, so this flatter track will suit him better. But he finished off his race very well over six, so we're hopeful he'll get the mile.”

“It would be a fantastic achievement,” Bell said of a potential Breeders' Cup win. “It's not going to be easy; we're under no pretensions that he's a warm-order favourite. We're taking a punt at the trip, but if he does stay he'll be in the mix because he has the class and he can certainly run to a higher rating over a mile if he stays. But we'll only find that out on Friday.”