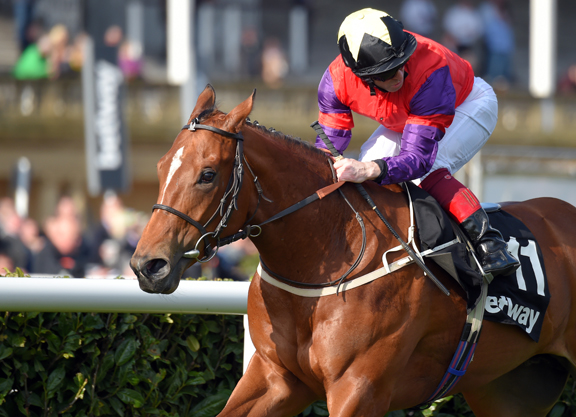 One of the hardest-campaigned of the juveniles lining up for Wednesday's G3 Molecomb S. at Glorious Goodwood, The Last Lion (GB) (Choisir {Aus}) will prove a tough nut to crack in this demanding speed test. Runner-up to Prince of Lir (Ire) (Kodiac {GB}) in Royal Ascot's G2 Norfolk S. over this trip June 16, John Brown and Megan Dennis's gritty performer came back reinvigorated from that tussle to register an authoritative win in the Listed Dragon S. also at this distance at Sandown July 1. “I think he is the horse they all have to beat on the back of his second in the Norfolk,” Mark Johnston's son and assistant trainer Charlie said. “Soft ground is an advantage to him as he handles it when others don't, but we know he copes when it is top of the ground. He had the worst draw at Sandown, but he had plenty of pace that day to work his way over. He is a very straightforward horse and Franny [Norton] gets on with him well. He has taken his racing very well.”

Having disappointed when only fifth in the Norfolk, Dr Johnny Hon's Global Applause (GB) (Mayson {GB}) can be forgiven that effort on soft ground and it is his previous performance when beating the G2 July S. winner Mehmas (Ire) (Acclamation {GB}) in the Listed National S. at Sandown May 26 that stands out. “Global Applause has been in good form since Ascot, where he didn't like the ground,” trainer Ed Dunlop said. “I purposely gave him a break after Ascot, as he is a big horse. He worked very well last week.”

As ever, it is foolish to underestimate one of Ballydoyle's runners and, despite having something to find on the bare form of his maiden success over six furlongs at Leopardstown July 14, Sportsmanship (War Front) has the scope to play a hand. One other who is an unknown quantity is Abdulla Al Khalifa's Nayyar (GB) (Exceed and Excel {Aus}), who impressed when winning his sole start over this trip at Chepstow July 8.