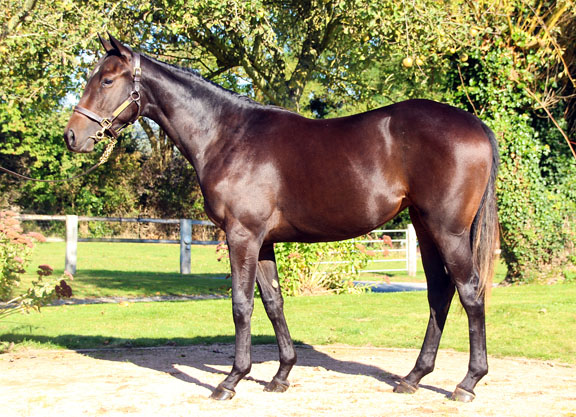 Just as Wednesday's session-topping Soldier Hollow (GB) filly had benefitted from a final-hour update when her full-sister added black-type at the racecourse across the street from Arqana's Deauville sales complex just hours before she stepped into the ring, Thursday's €230,000 session-topping filly was also the beneficiary of a late boost. Albeit, hers had come three weeks earlier, but it was about as good as its gets: her half-sister, Lily's Candle (Fr) (Style Vendome {Fr}), had upgraded the page significantly when winning the G1 Prix Marcel Boussac on the G1 Prix de l'Arc de Triomphe undercard, and Philippe Decouz, acting on behalf of World Cup-winning footballer Antoine Griezmann, had to work hard to see off Marc-Antoine Berghgracht and Eric Puerari for the American Post filly (lot 436) out of Golden Lily (Fr) (Dolphin Street {Fr}).

“She is a very racy filly with great limbs and a bit of stretch, and the family has worked tremendously with American Post,” said Decouz.

The filly was consigned by Antoine Lepeudry's Elevage de Tourgeville, and that aforementioned family affinity with American Post refers to the dam's stakes-winning half-sisters Liliside (Fr) and Lily America (Fr), as well as G1 Criterium de Saint-Cloud winner Robin of Navan (GB), who also appears under the second dam. By the time lot 436 was conceived, however, American Post had rather gone out of fashion and had been relocated from Haras d'Etreham to Haras de Treban in Central France. Undeterred, Lepeudry loaded his mare on the van and made the long haul. In another twist of fate, American Post, who was also responsible for a colt that fetched €75,000 from Stroud Coleman Bloodstock on Thursday, died just weeks after covering Golden Lily.

Lot 436 is by far the highest-priced sales yearling for Golden Lily, her prior best being a son of Kendargent (Fr) that was a €39,000 yearling turned €95,000 breeze-up horse. Lily's Candle cost just €15,000 at this sale last year, but had been bought by Martin Schwartz on the eve of her Group 1 win at Arqana's Arc Sale for €390,000 off a listed win and Group 3 fourth. The American Post filly was the breakout horse of the session and one of just two to make six-figures.

Earlier in the session, Alex Elliott went to €125,000 for lot 386, a filly by Wootton Bassett (GB) from the family of G1 Melbourne Cup winner Americain (Dynaformer).

“She is a gorgeous filly who oozed class,” said Elliott. “We will take her to Ireland first but I am not sure about training plans yet.”

Sea The Moon (Ger) has made a promising start to his stud career this year with his first 2-year-olds, and a colt by the G1 Deutsches Derby winner (lot 374) caught the eye of Australian agent John Foote, who signed the ticket at €85,000. While Foote has been active this week buying youngsters with staying prospects Down Under, this particular individual will head to Stephanie Nigge. The colt has an eye-catching page, his family tracing back to the dam of George Strawbridge's excellent producer In Clover (GB) (Inchinor {GB}), the dam of Group 1 winners With You (GB) (Dansili {GB}), We Are (GB) (Dansili {GB}) and Call The Wind (GB) (Frankel {GB}). The Sea The Moon colt was the third-most expensive yearling of the session, equal with a son of Siyouni (Fr) picked up by Paul Nataf (lot 416).

Another first-crop sire with a good result on Thursday was Anodin, who had a colt picked up by Nicolas Lefevre of Equos Racing International for €82,000 (lot 420). Lefevre was formerly assistant to Louis le Metayer of Astute Bloodstock, but has recently gone out on his own. This colt was purchased for an Irish partnership with the intent of going to the breeze-ups. Anodin's other results on the day included a €75,000 filly and colts that made €72,000 and €67,000.