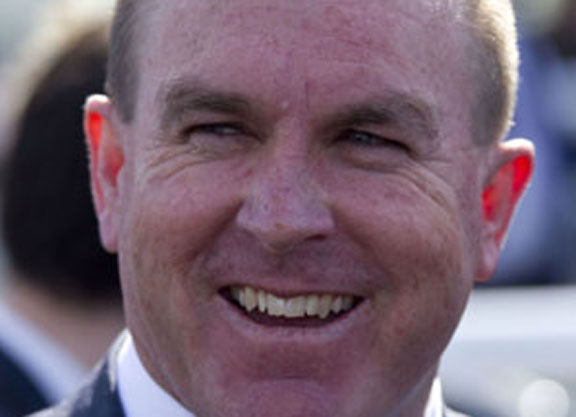 “She races best on the fresh side and the plan is not to expose her too much,” O'Shea said of the G2 Surround S. and G3 Glenlogan Park S. winner. “I thought the best run of her campaign was when she got beat in the Arrowfield Sprint at Randwick [when fifth]. She just didn't have any luck and I'd imagine that form around Japonisme, Counterattack and the like will be strong this spring.”

O'Shea added, “The Coolmore Classic is a race we think is the perfect target in the autumn and it is a race where weight plays a huge part, and the mares carrying too much find it difficult.”

Ghisoni is likely to take in the 1200-metre G2 Premier S. at Randwick Oct. 1 before traveling to Melbourne for the G2 Tab.com.au S. Oct. 29.

O'Shea also offered updates on his top 2-year-olds Astern (Aus) (Medaglia d'Oro) and Telperion (Aus) (Street Cry {Ire}). Astern, winner of the G2 Silver Slipper S. in the autumn before dead-heating with 'TDN Rising Star' El Divino (Aus) (Snitzel {Aus}) in the G3 Kindergarten S., will stick to sprinting and target the G1 Coolmore Stud S. Oct. 29. Listed winner Telperion, second in the G1 Sires' Produce S. and fourth in the G1 Golden Slipper, is likely to take in the early season 3-year-old highlight, the G1 Golden Rose over 1400 metres, before potentially stepping up in trip for the Caulfield Guineas.