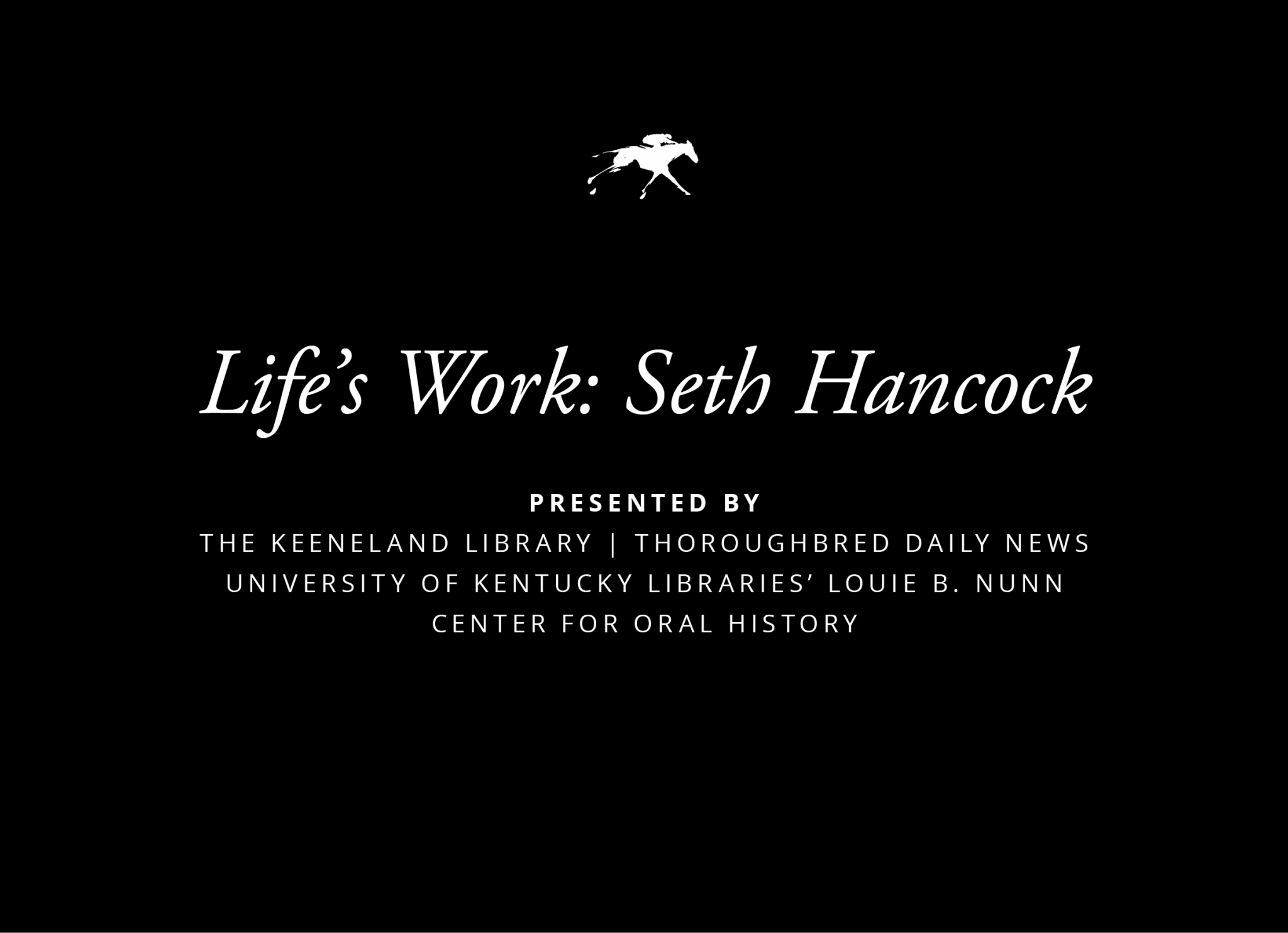 Editor’s Note: TDN is proud to partner with the Keeneland Library and the Nunn Center for Oral History at the University of Kentucky Libraries in a very special new collaboration: the Keeneland ‘Life’s Work’ Oral History Project, a series of filmed interviews with significant figures in the Thoroughbred industry. (See details in our story here.) The first of these, with Seth Hancock of Claiborne Farm, appears today.

“You ever see me around the sales wearing short pants, you better run for cover–because the world’s getting ready to come to an end.”

Seth Hancock is remembering Swale. Bittersweet animal! He slaked Claiborne’s ancestral thirst for a Kentucky Derby, trained by the great Woody Stephens. A week after Swale added the Belmont, Hancock was back in New York to see one of the farm’s fillies run in the Mother Goose.

“I went over to the barn, it was a nice, late spring day, and Swale was standing there, head out over the webbing,” he recalls. “Breeze blowing foretop, looked like the happiest horse on the face of the earth. Came home that night and Woody called next morning and said, ‘You sitting down?’ I said, ‘Well, yeah. What’s going on?’ He said, ‘Swale dropped dead this morning, Seth.'”

The whole saga comes flooding back. How his late father, the force of nature that was “Bull” Hancock, had raged when one of the best Claiborne mares not only delivered another damned filly–and so prolonged the wait for a Derby colt–but a filly with one eye. How Tuerta, Spanish for “one-eyed girl,” was retained only because she had become the last stakes winner in his father’s name. And how her yearling colt by Seattle Slew had gone missing from a paddock one misty morning.

They figured he must have jumped the fence, they called and hollered. And eventually found him asleep, overlooked in a swale. That was the kind of horse he was: all the hoopla of Derby day was never going to bother him.

The joy Hancock felt, when Swale exorcised the farm’s Derby curse, was not so much on his own account. At 35, he hoped he might yet get another shot someday. But he exulted for his mother, after all those years of Derby frustration and disappointment shared with Bull; and also for his wonderful partners in the horse.

Now, out of a clear blue sky, Swale was gone forever. He would never become another Bold Ruler, or Nasrullah, or Princequillo; never become the next link in the chain forged by his father, and his grandfather before him.

“And you’re like, ‘Damn,'” Hancock says now, looking back across another 35 years. “‘What am I doing in this thing here? This might be a little rough… But what the hell, I ain’t the first that was dealt a bitter pill, and I won’t be the last for sure.’ And I haven’t been. LeRoy Jolley said it best: ‘This game wasn’t meant to be played by people wearing short pants.'”
Click here to read the whole story, or see the entire 30-minute video here.