Life Is Good to Pletcher, Returns to Worktab 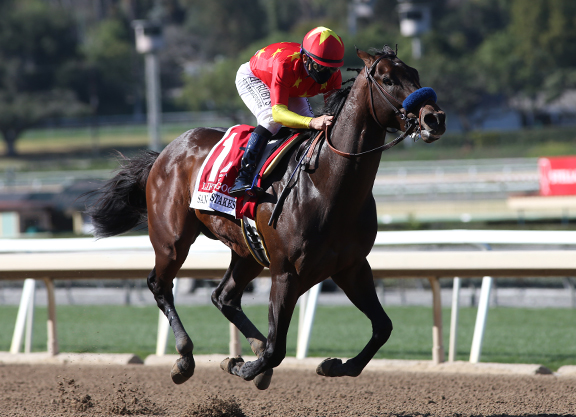 by Bill Finley and Steve Sherack

Undefeated and considered one of the most promising horses in the sport, Life Is Good (Into Mischief) will soon join the Todd Pletcher stable. He had been trained by Bob Baffert, who has lost a number of top horses due to his ongoing problems involving the Medina Spirit (Protonico) positive in the GI Kentucky Derby for betamethasone.

After winning the GII San Felipe S., Mar. 6 at Santa Anita, Life Is Good was sidelined and ruled out of the Triple Crown races after coming down with a hind-end injury, which required surgery to remove a chip in his ankle. He worked three furlongs Thursday morning at Keeneland in :37 flat.

Elliott Walden, the president and CEO of WinStar Farm, the co-owner of Life Is Good, confirmed the trainer switch.

“Life is Good worked this a.m. with our farm trainer, Destin Heath at Keeneland,” Walden said via text. “His team has done a wonderful job getting him back to the work tab. He went :37 and out in :49 2/5. The plan is to ship to Todd Pletcher in the coming weeks with a possibility of running in New York later this year. With the ban on Bob in Kentucky and New York right now, our opportunities are limited. We will continue to evaluate the situation with Bob and appreciate everything he has done with Life is Good.”

One landing spot for Life Is Good could be the GI Runhappy Travers S. Aug. 28 in Saratoga. Baffert has been banned by the New York Racing Association and, currently, is not able to run in New York or stable there. He has, however, filed a suit against NYRA seeking a stay that would allow him to compete at the NYRA tracks.

Walden declined to answer any other questions regarding WinStar's relationship with Baffert.

WinStar has also moved Country Grammer (Tonalist) from the Baffert barn to the Pletcher stable. The winner of the GI Hollywood Gold Cup in his last start, he may go next in the GII Suburban H. at Belmont. Still another WinStar-owned stakes horse has been moved out of the Baffert barn. Crystal Ball (Malibu Moon) will make her debut Saturday for trainer Rodolphe Brisset in the Lady Jacqueline S. at Thistledown. Spendthrift Farm has also reportedly moved its horses out of the Baffert barn. And Hozier (Pioneerof the Nile) will make his debut Saturday in the GIII Ohio Derby for Brisset after campaigning for Baffert. He is owned by the partnership of SF Racing LLC, Starlight Racing, Madaket Stables LLC, Stonestreet Stables LLC, Golconda Stable, Siena Farm LLC and Robert Masterson.