Life Is Good Justifies the Hype in San Felipe 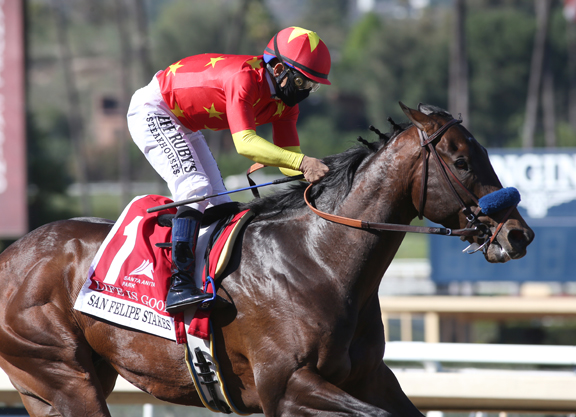 Representing part of the group that campaigned 2018 Triple Crown winner Justify (Scat Daddy), and sharing a sire and some quirks with last year's Horse of the Year Authentic (Into Mischief), Life Is Good further asserted his position as the best of Bob Baffert's current crop of 3-year-olds Saturday, demolishing his competition in the GII San Felipe S. at Santa Anita. WinStar Farm and CHC Inc.'s 'TDN Rising Star' was a 9 1/2-length sprint winner on debut at Del Mar Nov. 22, and had been off since defeating stablemate Medina Spirit (Protonico) by 3/4 of a length in the Jan. 2 GIII Sham S., good for a 101 Beyer Speed Figure.

Right to the lead from the rail as expected, the overwhelming 1-2 favorite was able to get several lengths of separation down the backside as a hard-held Medina Spirit took the first turn wide, floating The Great One (Nyquist) wider. Still traveling well within himself after a :48.83 half, the bay entered the stretch some five lengths to the good, but again displayed his previously seen antics of drifting out in the stretch. He had the extra ground to give up, however, and cruised under the line a jaw-dropping eight lengths clear. Medina Spirit held second, while 'Rising Stars' Dream Shake (Twirling Candy) and Roman Centurian (Empire Maker) completed the trifecta and super, respectively.

“He's learning to settle. He's maturing and getting smarter,” said winning rider Mike Smith, who also rode Justify. “Early on, he was so used to exploding from the pole or the gate. He's learning how to run now which is the big key, and he's learning how to get into a rhythm. The rhythm is going to be a bit fast because he is that good and he has an extremely high cruising speed. We are going to have to work on some little quirks. He starts looking at things because he is out there by himself, but I can't take so much of a hold of him to give him company either, so it's a catch-22.

The Hall of Famer continued, “He's just so talented. I had a strong hold on him down to the wire, just holding onto him making sure that he stayed straight… This horse is like that Muhammad Ali song. He floats like a butterfly, and stings like a bee.”

As for Life Is Good's potential to stretch out further, Smith said, “I think he showed that he could get the distance, when a horse can get a mile and sixteenth the way he did today, it gives you every indication they could go an eighth of a mile further.”

Baffert added, “”I like the way he got away from the gate, both of my horses got away cleanly, they were in a good spot.  Down the backside that's where this horse can get a little tough and I was hoping we'd get a little 47 and change. But Mike he just sat on him, he was doing it so easily, I saw 46 and four I said, 'well, I think I could live with that. I always thought he could be a super horse, we'll find out today', but at the quarter pole I could tell he was just still cruising, just doing it easy. I just feel fortunate that I have this horse in my barn. My horse that ran second (Medina Spirit), he's a really nice horse and  I felt bad I had to run him against him, but they need these races and I didn't want to ship yet so I'm just  happy for the China Horse Club. It's nice to come out here, it feels a little festive today watching these good horses run.”

Life Is Good was made the 7-1 favorite among individual betting choices in the GI Kentucky Derby future wager pool that closed Feb. 14. As of Saturday evening he was the 4-1 public pick in the pool set to close Sunday evening. He is now tied with last Saturday's GII Fasig-Tipton Fountain of Youth S. winner Greatest Honour (Tapit) atop the GI Kentucky Derby leaderboard with 60 points.

After being perched on various stages of the Derby trail the past few years with luminaries like champions Maximum Security (New Year's Day), Game Winner (Candy Ride {Arg}), and West Coast (Flatter), breeders Gary and Mary West are back this year in a big way with last month's GII San Vicente S. winner Concert Tour (Street Sense)–who they still own–and Life Is Good, both undefeated, and both 'TDN Rising Stars'.

Life Is Good also has the nation's hottest sire going for him in Into Mischief, whose 90 black-type winners and 37 graded winners include last year's Horse of the Year Authentic. The Spendthrift sire currently leads the 2021 North American rankings by earnings, black-type horses, and graded winners. Life Is Good's broodmare sire, Distorted Humor, is also one of the best in the business with 108 stakes winners out of his daughters. Five stakes winners (and 12 stakes performers) are specifically by Into Mischief out of a Distorted Humor mare, including MGISW Practical Joke.

Life Is Good's dam, Beach Walk, who sold as a $435,000 Keeneland September yearling, has a 2020 filly by Blame and was bred back to Candy Ride (Arg). Beach Walk's dam, SW & MGISP Bonnie Blue Flag (Mineshaft), sold for $1.5 million at Fasig-Tipton in 2011, but had dropped to just $15,000 at Keeneland in 2019. Bonnie Blue Flag's fourth dam, Court Circuit (Royal Vale), produced MGSWs Honorable Miss (Damascus), whose name is still honored with a graded race at Saratoga, and Bailjumper (Damascus), who still appears in pedigrees as the broodmare sire of super stallion Medaglia d'Oro.