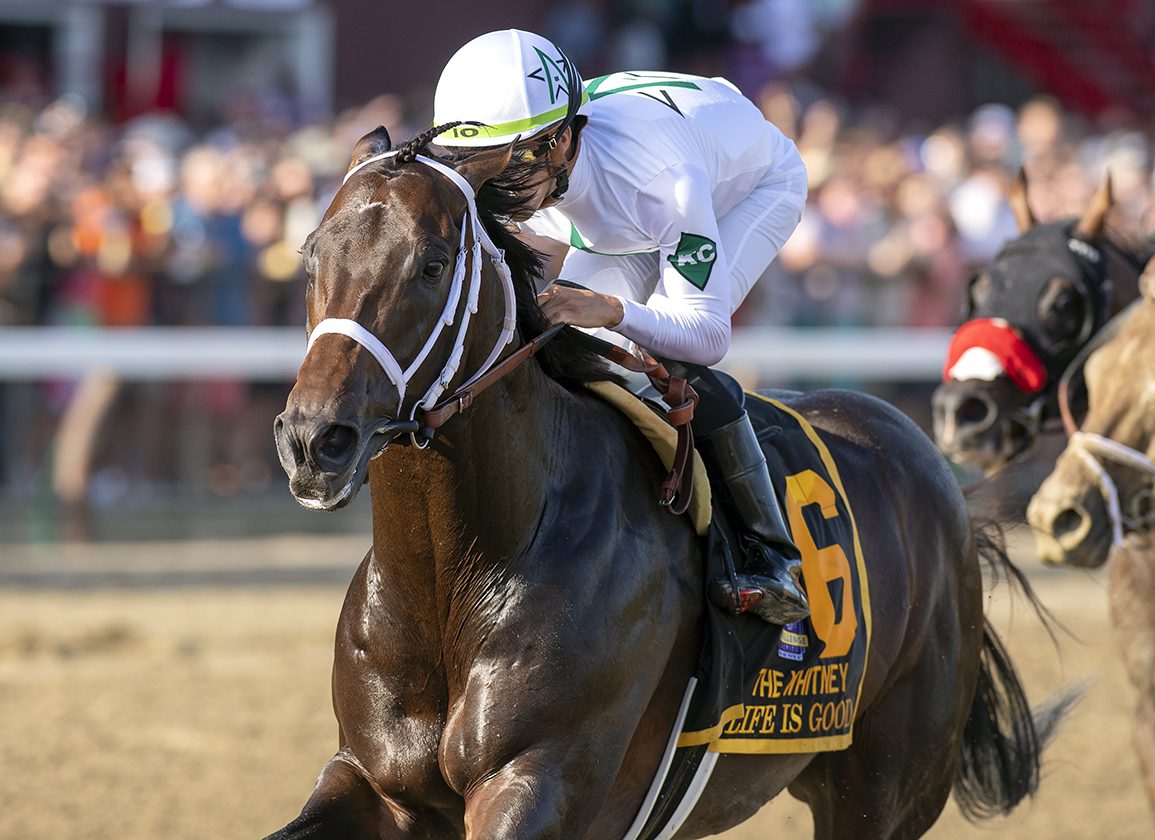 Life Is Good (Into Mischief) caught a flier right out of the gate, strutted his stuff up front for six furlongs and fought off a pair of stubborn challengers through the Saratoga stretch to capture Saturday's $1-million GI Whitney S., punch his ticket to the GI Longines Breeders' Cup Classic and stick his nose in front of a crowded Horse of the Year race.

Running away to a 9 1/2-length debut romp and 'TDN Rising Star' honors for Bob Baffert in November of 2020 at Del Mar, the $525,000 Keeneland September graduate stamped himself as the early favorite for the GI Kentucky Derby after capturing the GIII Sham S. and GII San Felipe S., the latter by eight lengths for an eye-popping 107 Beyer. That would be his last start for Baffert, however, as an injury forced him off the Derby trail and he was transferred to Todd Pletcher with Baffert facing multiple suspensions for eventual Derby winner Medina Spirit (Protonico)'s drug positive.

A hard-fought neck second to eventual champion Jackie's Warrior (Maclean's Music) upon return in a thrilling renewal of the GI H. Allen Jerkens S. here last summer, Life Is Good cruised to open-lengths victories in the GII Kelso H., GI Big Ass Fans Breeders' Cup Dirt Mile and GI Pegasus World Cup Invitational S. before fading late to finish fourth in the G1 Dubai World Cup. The bay returned no worse for the journey, however, a career-high 112 Beyer in a five-length conquest of the GII John A. Nerud S. July 2 at Belmont.

Backed to 85 cents on the dollar Saturday, Life Is Good could not have broken any better from his outside post and was in front in the blink of an eye. Kicking clear in a handful of strides, he was chased fairly closely by Hot Rod Charlie (Oxbow) and Olympiad (Speightstown) through a modest :23.64 quarter before turning on the jets down the backstretch and opening up by about four lengths past a half in :46.84. Hot Rod Charlie inched closer as Olympiad was asked for his best on the latter half of the far turn, and what looked like it would be a runaway score for Life Is Good suddenly became a horse race with Hot Rod Charlie and Happy Saver (Super Saver) eyeballing the favorite on either side as heads pointed for home.

Irad Ortiz, Jr., confident into the lane despite the creeping danger, quickly got to work on Life Is Good, who began to turn back the pair past mid-stretch. Shifting to the inside from a righty whip into Happy Saver's path while not quite interfering a furlong from home, Life Is Good held safe from there while still meandering a bit for a two-length success despite the valiant efforts of Happy Saver and Hot Rod Charlie, with the former narrowly edging the latter for second to complete a Todd Pletcher exacta. Olympiad was a one-paced fourth.

“He's a nice horse. He deserves all the credit,” said Ortiz. “When we got to the three-quarter pole and along the backside he changed leads and he just took off. Two jumps. He was strong. After that, I didn't want to fight too much with him. I was clear [in the stretch]. I looked and came [inside] a little bit. I know if he felt somebody that he would give me another run and more. I know he was coming back a little, the track is not that fast, so if he feels somebody he will fight. I know he will fight, so that is why I was looking.”

The win was the third in the Whitney in five years for Ortiz after scores aboard Improbable (City Zip) in 2020 and Diversify (Bellamy Road) in 2018.

“This means a lot,” he said. “It's a great race to win. I'm happy for the connections and the horse, too. He stayed and just never quit.”
“When you feel like you're bringing over the best horse, you worry about everything,” Pletcher, who moved within one of tying John M. Gaver, Sr. with his fourth Whitney win, added. “Today we got the rain, the deep track, the heat and humidity. All those things can be concerning, but he was able to overcome all of that and just show how brilliant he really is. To me it's the premier older horse race in the country outside of the Breeders' Cup Classic. So, it means a lot.”

Of his 14-1 runner-up finisher, Pletcher said, “Happy Saver ran super. He just kept finding. It looked like for a second like he was going to get right there. Johnny [Velazquez] said when he had to angle him off the rail, you could tell Life Is Good kind of found a little more. I was proud of his effort. We'll see what's next, we could wait for the Woodward or come back for the Jockey Club [Gold Cup]. We've got some options.”

Jockey Junior Alvarado said of Olympiad, who had his five-race winning streak snapped with a 9 1/4-length defeat, “He didn't run at all. He didn't run his race. Not even close. If he ran his race at least I'd say, 'We finished second.' But he didn't run his race. At the half-mile I knew I was in trouble. He wasn't traveling or picking it up like he normally does. I gave him a chance to regroup at the three-eighths and start picking it up again to see if he would start doing it and nothing. At that point I knew he wasn't showing up. No excuses for the track [conditions]. Good horses are supposed to handle the track and anything else. That is not the excuse. If he had a problem with the track he should at least try to the eighth pole, but he was done very early for me.”

The second foal to race out of Beach Walk, a $435,000 KEESEP yearling who went 0-for-5 in her career, Life Is Good is one of 111 stakes victors, 51 graded stakes winners and 11 Grade I conquerors for Into Mischief. His second dam Bonnie Blue Flag was runner-up in the 2010 GI Test S. and is a half-sister to MGISW Diamondrella (GB) (Rock of Gibraltar {Ire}). Beach Walk has a juvenile Blame filly named Living Good who worked a best-of-53 bullet from the gate in :47 flat Saturday at Ellis, a yearling colt by Candy Ride (Arg) and a full-brother to Life Is Good foaled Mar. 31. She returned to Into Mischief for 2023.