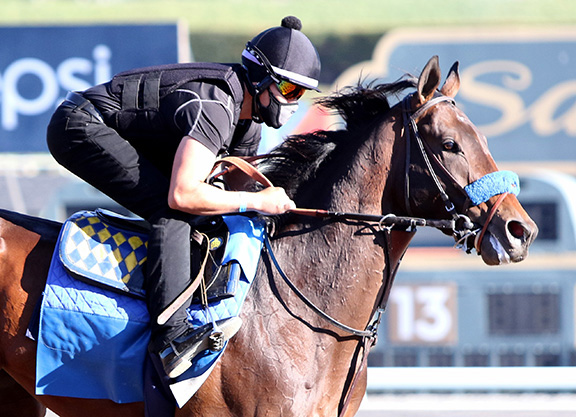 Unbeaten 'TDN Rising Star' Life Is Good (Into Mischief), the 7-1 individual favorite in Pool 3 of the GI Kentucky Derby Future Wager, will look to go three-for-three in Saturday's GII San Felipe S. The 1 1/16-miles contest offers 50-20-10-5 points on the road to the Kentucky Derby.

The blowout debut winner at Del Mar Nov. 22 set an uncontested pace while making his two turn-debut in the GIII Sham S. Jan. 2, and, after very confident handling beneath Mike Smith in the stretch, held a 3/4-length advantage over stablemate Medina Spirit (Protonico). The rail-drawn, 4-5 morning-line favorite tackles an additional sixteenth of a mile in the San Felipe.

Life Is Good, owned by CHC Inc. and WinStar Farm, is on the same trajectory, to this point at least, as another Bob Baffert-trained son of Into Mischief, the brilliant Authentic, who pulled off the Sham/San Felipe double in 2020 en route to a Horse of the Year campaign, which also included wins in the GI Kentucky Derby and GI Breeders' Cup Classic.

The bargain $35,000 OBSOPN buy Medina Spirit, meanwhile, proved his effort in the Sham was certainly legit with a refuse-to-lose, front-running tally by a neck after taking heat through fast fractions in the GIII Robert B. Lewis S. Jan. 30.

“He's a good horse and I could tell that Mike was just cruising out there,” Baffert said of Life Is Good after the Sham. “It reminded me a lot of Authentic last year, when he did the same thing, and he looked like a drunk out there coming down [the stretch]. I think Mike did a great job just sort of cruising around there and it was just the kind of race we were looking for. They ran pretty fast, these are two good horses.”

'TDN Rising Star' Roman Centurian (Empire Maker) closed from last of six and made a flashy, four-wide rally on the far turn to finish a strong second in a blanket photo after bumping with a rival in the stretch in his stakes debut in the Robert B. Lewis.

“He's a very talented horse,” trainer Simon Callaghan said. “I think the San Felipe will reveal a lot, but again, Roman Centurian is a very good horse. I'm happy with him and looking forward to the race.”

The Great One (Nyquist), second, beaten a nose as a maiden in the GII Los Alamitos Futurity Dec. 19, enters off a blowout 14-length graduation for Doug O'Neill over three rivals at Santa Anita Jan. 23.