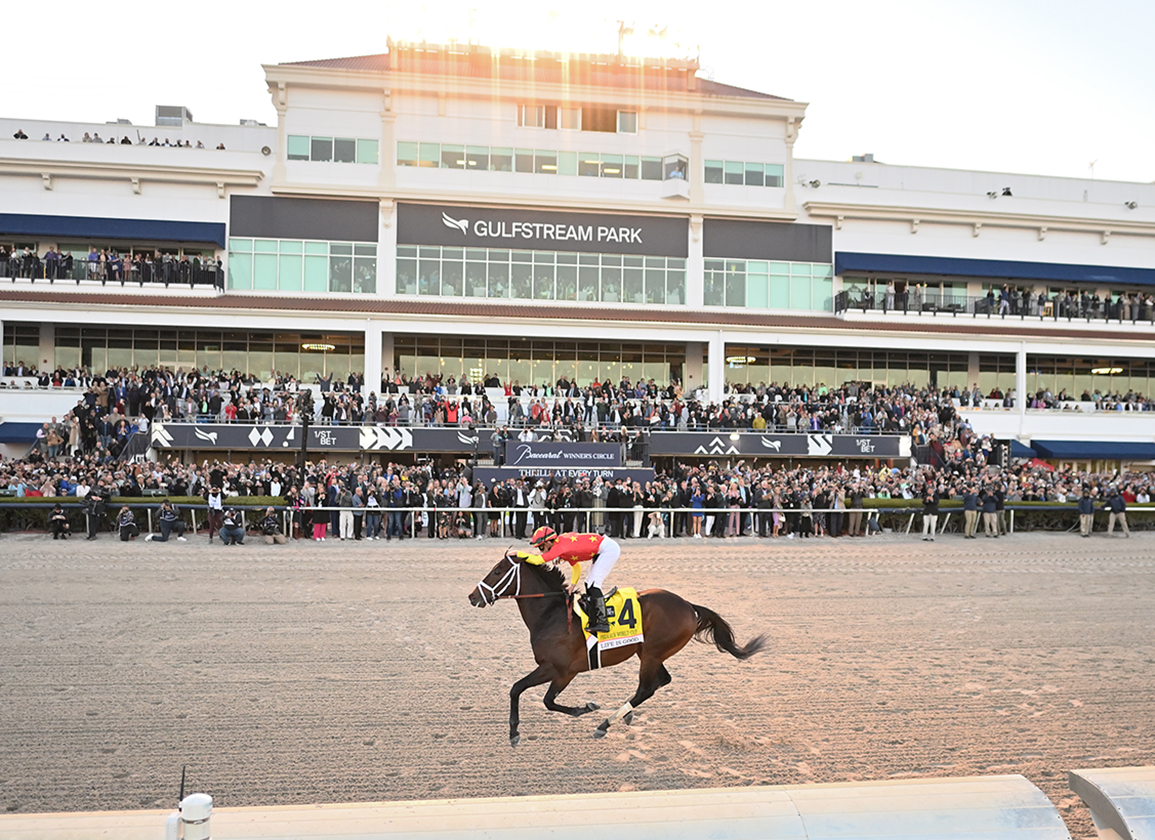 HALLANDALE, FL–Heading into Saturday's Pegasus World Cup card at Gulfstream, it wasn't much of a stretch to think that trainer Todd Pletcher and jockey Irad Ortiz Jr. could walk away the winners of both Pegasus features of the afternoon. However, considering the obstacles facing them, one had to concede that it might be a bit too tall of an order. The GI Pegasus World Cup Turf contender Colonel Liam (Liam's Map) was coming off a massive layoff, 239 days to be exact, and Life Is Good (Into Mischief), while freakishly fast and seemingly yet to reach his full potential, had to face the likes of likely Horse of the Year Knicks Go (Paynter) in the day's feature, the $3-million GI Pegasus World Cup Invitational S. Throw into the mix that Ortiz could still see a knee fracture sustained Jan. 7 in the rearview mirror, forcing him to the sidelines for three weeks and putting him woefully close to missing the big day altogether. However, on the big day, 'The Colonel' put it all together to defend his title, while Life Is Good put on a performance that left spectators as wowed as his Breeders' Cup win last fall. And as WinStar Farm's Kenny Troutt, who campaigns Life Is Good with China Horse Club, accurately pointed out during the post-race press conference, there must have been a higher force at play, allowing the stars to align on the big day.

“It's just been a blessing,” said Trout. “God has really, really helped us. This horse here has just been really special…This horse is really one of the best horses we've ever had. He's just got all the talent there is.”

Keeping to the theme, Ortiz added, “Thank God, first of all. Thank God for my health. Also, a couple doctors told me I could make it. My friend Dr. Rafael Lopez told me to stay positive and told me I could do it.”

Sent off the slight favorite over Knicks Go, Life Is Good rushed out to take the lead despite an awkward step out of stall 4. And he wasn't taking 'no' for an answer, quickly spurting off to an uncontested quarter in :23.12 as Knicks Go was content to survey the affair from a second, several lengths behind. Still cruising up front following a :46.35 half mile, the powerful bay was given a couple of jiggles of encouragement approaching the quarter pole. Drifting out well wide turning into the homestretch as his rivals pursued in vain, the 4-year-old showed what all the pre-race hype was about, crossing the a geared-down 3 1/4-lengths ahead of Knicks Go, who finished a length ahead of Stiletto Boy (Shackleford). Endorsed (Medaglia d'Oro) was fourth and GI Belmont S. winner Sir Winston (Awesome Again) was fifth.

“We were committed to letting him run his race,” said Pletcher, who named the G1 Dubai World Cup in March as Life is Good's likely next target. “You know Knicks Go is a fast horse. We didn't know for sure how it was going to play out. There was the potential for a speed duel there. He broke and I didn't think his first step was great, but he recovered pretty quickly and got to the turn in good shape. Knicks Go maybe didn't bounce away as quick as he does sometimes, so we kind of had the advantage at that point.”

Added Ortiz, “I respect [Knicks Go] a lot. I thought it was going to be a match race. But going into the first turn, my horse was so fast, so I just let him do his thing. He went to the first turn a little fast. I never thought I would be in front like that. When I looked around, I didn't see anybody. Todd told me to use my judgement. He relaxed so well, and I couldn't wait to let him run. He was going fast, but he was doing it the right way.”

Commenting on his ride aboard last fall's GI Breeders' Cup Classic winner, Joel Rosario said, “I thought the trip would be fine. We thought maybe we'd be on the lead. I thought Life Is Good probably had a little more speed than me. He ran his race. They came over a little bit on the first turn, so I had to kind of just take him outside a little bit and let him relax from there, and hopefully, at some point, the horse would come back a little bit But he didn't come back. He just kept going.”

Brad Cox added, “The plan was definitely to go. I wanted to– we just got outrun. I talked to Joel and he said he handled the track fine. He said a couple on his outside were moving along pretty good and it kind of got a little tight [early], so he took him back off of it a little bit and obviously, the winner was just galloping on the lead.”

Cox continued, “He's been super good to us. We're proud of him and we're happy and excited that he's retiring sound and healthy and I look forward to training some of his babies in a couple of years. He's six; it's time for him to go off to stud. Hopefully, he'll pass on his heart and determination and be a good sire.”

Purchased for $525,000 by China Horse Club and WinStar Farm at the Keeneland September Sale, Life Is Good kicked off his career with Hall of Famer Bob Baffert and his talent became clear early. He stamped himself an exciting GI Kentucky Derby prospect with a TDN Rising Star-earning performance when scoring by 9 1/2 length at Del Mar in the fall of 2020. The following spring, he annexed the GIII Sham S. and GII San Felipe S.-besting subsequent Derby winner Medina Spirit (Protanico) in both those starts.

Life is Good was knocked off the Derby trail–and forced to miss the entire Triple Crown series–after a chip was discovered in his left hind ankle after a breeze in preparation for the GI Santa Anita Derby. The chip was minor, but required surgery and time off.

Transferred to Pletcher thereafter, the bay was narrowly beaten by Jackie's Warrior (Maclean's Music) in the GI H. Allen Jerkens Memorial at Saratoga before taking on his elders for the first time and coming out much the best in the Sept. 25 GII Kelso H. at Belmont. All of those performances appeared to be an appetizer for what was to come next. The well-backed favorite in the GI Big Ass Fans GI Breeders' Cup Dirt Mile at Del Mar Nov. 6, the Gary and Mary West-bred colt rolled home a scintillating 5 3/4-length winner.

Added Pletcher, “I don't want to get in trouble with any other owners I have trained for, [but] I can't think of one that is better than him. What makes him so special is his ability to run fast, the high cruising speed and [then] keep going. He's just got tremendous mechanics. Just a phenomenal talent.”

Pedigree Notes:
North America's leading sire of 2021 combined with North America's leading broodmare sire of 2021–what's not to like? Life Is Good is a product of the oldest formula in the books: breeding the best to the best and hoping for the best. He is one of Into Mischief's 45 graded winners and 106 black-type winners, as well as one of the 119 stakes winners out of Distorted Humor's daughters. MGISW Practical Joke, MGSW Fulsome, and four other listed winners all follow the identical formula of Into Mischief over Distorted Humor, as do another four graded-placed winners.

Beach Walk has a 2-year-old filly by Blame, a yearling colt by Candy Ride (Arg), and was bred back to Into Mischief. She traces directly to French and American blue hen Frizette (Hamburg), her 11th dam, whose descendants include leading French sire of yesteryear Tourbillon (Fr) and leading American sires of more recent decades, including Mr. Prospector and Seattle Slew.