Life Is Good Draws Gate One in Dubai World Cup 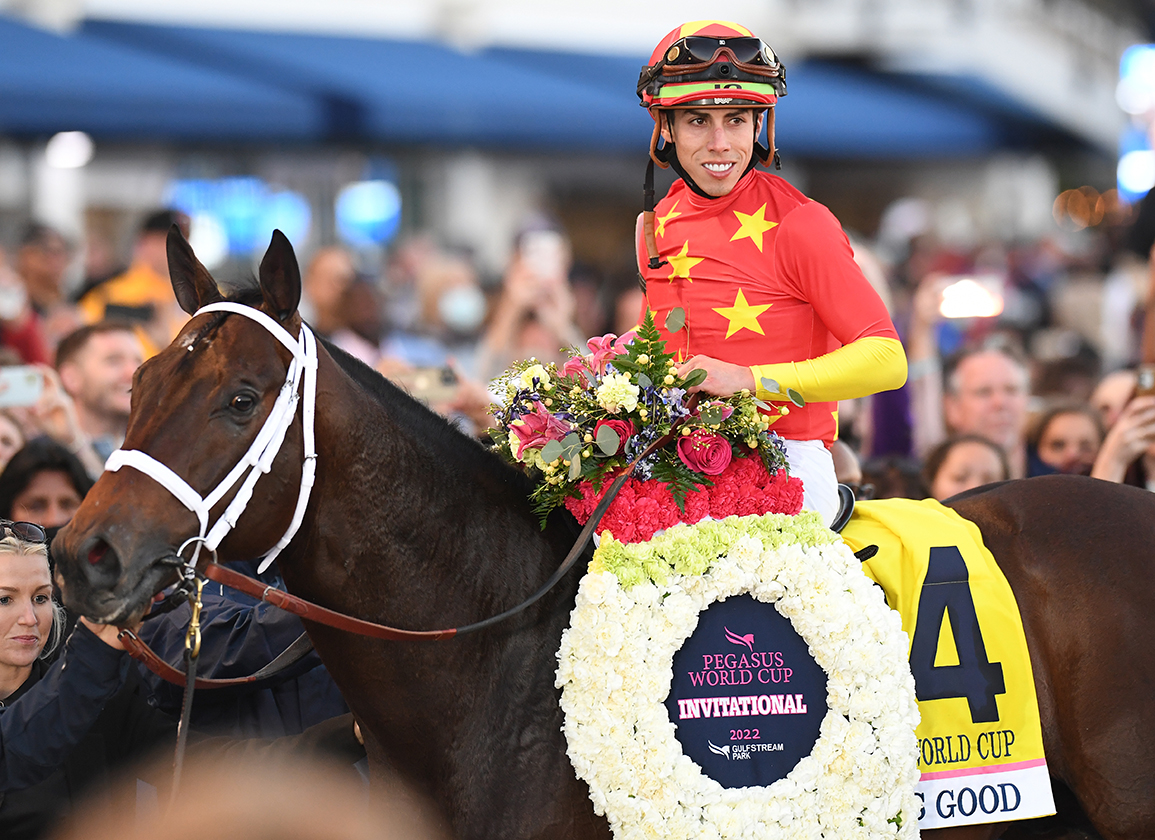 WinStar Farm and China Horse Club's Life Is Good (Into Mischief), who won the GI Breeders' Cup Dirt Mile and GI Pegasus World Cup Invitational S. in dominating fashion, has drawn gate one in the $12-million G1 Dubai World Cup. The 4-year-old colt is six for seven, with five of his wins at the graded level.

Elliott Walden, president and racing manager of co-owner WinStar Farm said, “It's an 11-horse field. He has enough time to get over, and has enough speed to put himself in a good position. It's been amazing. He has a beautiful way of moving, I think he knows he's special. It is just a blessing to have him. It's a great honour to be favourite. We feel grateful to have him.”

Leandro Mora, assistant trainer to Doug O'Neill, said, “[We are] very happy. He needs to prove it. We talked about it we wanted any post from one through seven, so we are happy.”

Added Roadrunner Racing's Greg Helm, “To be a part of this event in Dubai is outrageous. I am shaking like a leaf. I'm so excited to be here.”

Carlos Rosas, exercise rider for Asmussen, said, “I didn't want him inside drawn on the rail so we have gone for the middle in eight. Hopefully his jockey Jose Ortiz can get a good position from there. He has been training beautifully since he finished third in the Saudi Cup.”

Bin Suroor said, “I'm very happy with that, we've got the best draw. This was always the plan for him and we've always trained him on the all-weather track at home. He's always shown his form really well on that and he's trained really well so I'm very happy with him. He worked last Saturday and it was the best work I've ever seen, clocking 1:26 on the bridle.”

He added, “He came back very well from his last run, his draw is brilliant and Christophe [Soumillon] the jockey knows the track very well. He's a two-time winner of the race [with Thunder Snow (Ire) (Helmet {Aus}) in 2018 and 2019] so it's great to have him on our side.

“It's a very tough race and it's hard to win. You always have to have a good horse. We've won it nine times and we'll try to do it again.”

Godolphin's managing director Hugh Anderson added of Magny Cours, “We have the best trainer in Europe at present and the leading jockey in Dubai on our side. Maybe they won't thank me for drawing nine, but he is in better form now having disappointed us a little last time in Saudi. He finished third in this race last year so we know he likes the track.”

Japan, which has launched their strongest assault to date on the Dubai World Cup card, is represented by Shinobu Nakanishi's Chuwa Wizard (Jpn) (King Kamehameha {Jpn}) from post three. He was runner-up in the 2021 edition of the race.

Trainer Ryuji Okubo said, “I'm happy with the gate and his condition is better than last year. He's got the experience of Meydan last year and that has served him well for this year. I'm happier this year and gate three is perfect.”

Stud Old Friends and Antonio Cintra's Aero Trem (Brz) (Shanghai Bobby) will leave from barrier two. Cintra said, “It's a good draw for him, he's a horse that can't run in the back [during his races] so it's a good draw.

“We're very proud to be here again. Last season was the first time we had a horse in the World Cup but I think this year we arrive with Aero Trem who is looking 100% so we're hoping for a good race from him.”

Haggas's wife Maureen, said, “We're quite happy with that, he's inexperienced on the dirt so he wouldn't have wanted to be drawn on the inside in stalls one to three. To be more to the outside is better for him and he'll work it out on the dirt.”