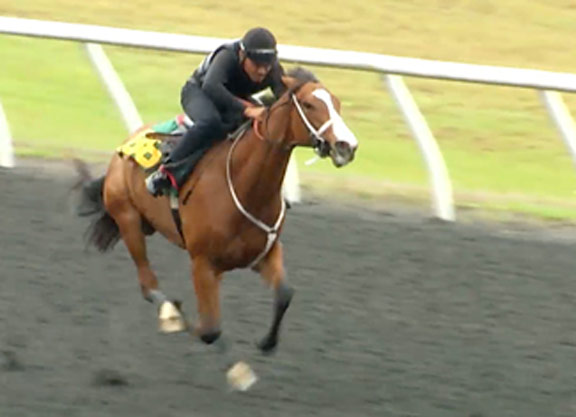 A Liam's Map filly (Hip 1188) from the Flying Fish consignment looks to become the next star to come out of Art Fisher's training center after being one of eight juveniles to work a bullet in :9 4/5 during the Ocala Breeders' Sales Company's Spring Sale under-tack show Saturday. The start of the sixth and final session was delayed until 9:30 a.m. due to storms in the forecast.

“The third time I breezed her, I called the guy who owns her and said, 'This filly is diseased with speed.' So, I kind of put in her in the freezer and I didn't have to do much with her,” said Fisher. “I couldn't have been more proud of her. She went out in :20 4/5 and she x-rays and scopes perfect. She has been very good the whole season.”

“She has done great,” Fisher said. “She has grown probably two hands. She has gained a lot of weight, never misses an oat. She lays down a lot and is very smart around the barn, very sensible. Anybody can walk her. You can walk her with a kite string, but when you put the tack on her, she knows what the game is about.”

Flying Fish's Spring Sale consignment is comprised of nine horses this year with the Liam's Map filly being the fastest worker. The second quickest breezer is a Medaglia d'Oro colt out of MGSW Tin Type Gal (Tapit) (Hip 320), who belongs to another longtime client of Fisher, Len Riggio of My Meadowview. The colt went in :10 flat earlier this week.

“I broke Tin Type Gal for Mr. Riggio too,” Fisher said. “This colt is incredible. A friend of mine, who is in the Hall of Fame, came by and said this colt had the best work he has seen in the sale.”

Tin Type Gal is one of many talented runners to go through Fisher's program over the years. He broke, trained and sold MGISW Secret Circle (Eddington) at OBS March for $165,000; and conditioned the top two finishers in last year's GI Pennsylvania Derby, Mr. Money (Goldencents) and Math Wizard (Algorithm). Fisher also broke and trained consecutive GI Preakness S. winners in Pine Bluff (Danzig) and Prairie Bayou (Little Missouri), both of whom were owned by John Ed Anthony's Loblolly Stables.

Anthony has since changed his stable name to Shortleaf Stable, but he still works with Fisher and they have a chance at more Classic success with GI Kentucky Derby contender Caddo River (Hard Spun). Winner of the Smarty Jones S. earlier this year, the homebred most recently finished second in the Apr. 10 GI Arkansas Derby.

“After I breezed him five or six times, I called Mr. Anthony and said, 'I am afraid to breeze him anymore. He is just too fast. He needs to get off this training track,'” Fisher said. “So, we sent him up to Brad [Cox] and the rest is history. He is a lovely horse and I couldn't be more proud of him.”

The four-day OBS Spring Sale gets underway Tuesday with sessions beginning at 10 a.m.