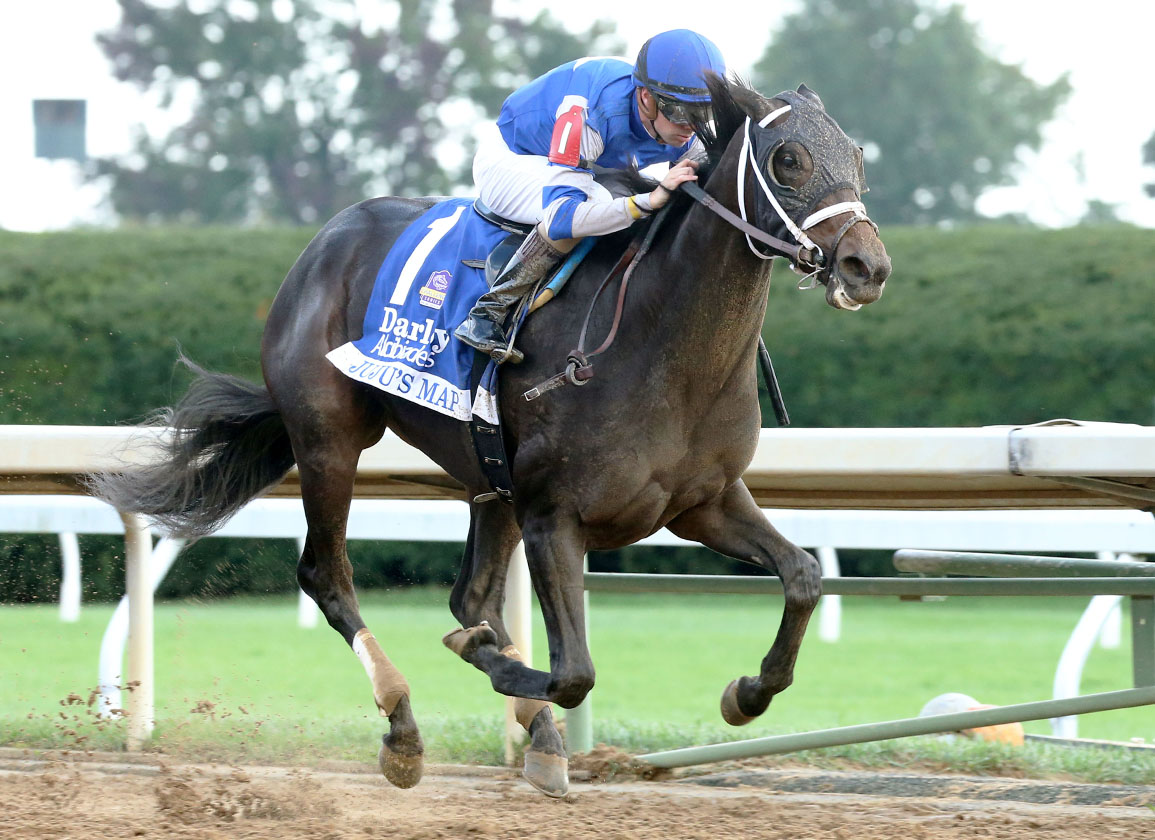 Albaugh Family Stables's Juju's Map (Liam's Map) threw her hat in the ring among what appears to be a solid juvenile filly division with a powerful victory in Friday's “Win and You're In” GI Darley Alcibiades S. at Keeneland. Reined in to avoid a speed duel heading into the first bend, the rail-drawn bay sat in a clear second as Runup (Runhappy) zipped along through splits of :22.75 and :46 flat. The 2-1 favorite took over midway on the home bend, and was briefly challenged by her stablemate Matareya (Pioneerof the Nile), but opened up at will once she straightened to report home a convincing 4 1/4-length winner. Pricey maiden Distinctlypossible (Curlin) got going late to be second, with longshot and GI Spinaway S. fourth Sequist (Nyquist) rounding out the trifecta.

“She's very talented to start with, but today it was tricky because there were a couple other speed horses,” said winning rider Florent Geroux. “From the one hole, you have to use speed to your advantage, to make sure they don't cross over and slow it down too fast. So I just wanted to break ahead so if they wanted the lead they would have to work for it, and that's what they did.

“I was able to ease her back in the first turn. From there she took a nice breather with me down the backside and from there I knew she was going to be pretty tough. Turning for home I saw [Matareya] coming up and she's pretty talented too, but when I asked her down the lane she gave me another gear, the kind of effort you want to see, and hopefully she's going into the Breeders' Cup in the right way.”

Juju's Map was second at odds-on sprinting at Ellis July 25 before breaking through at the Pea Patch by 5 3/4 lengths when stretched to a mile Sept. 3.

“She sat close to a hot pace and was still able to finish, and I thought, 'That's what good horses do.' She broke running, Florent put her in a good position and she finished up well,” Cox said. “I'm very proud of her performance. We'll obviously talk it over with the Albaugh team, and as long as she comes out of it in good order I think we'll march on toward California [and the Nov. 5 GI Breeders' Cup Juvenile Fillies]. It was a good trip last time and hopefully she can show up and run her race and be very effective.”

Liam's Map, bred by Dennis Albaugh, is now responsible for four Grade I winners and seven graded winners overall. Three of those four reached the highest level at two despite the fact that Liam's Map didn't blossom until four, when he took the GI Woodward S. and GI Breeders' Cup Dirt Mile locally.

Juju's Map is the 17th stakes winner (three graded including a Group 1 winner in Brazil) for Flatter as a broodmare sire. Her unplaced dam is half to GISW Fault (Blame). This is the extended female family of local Grade II winner Fioretti (Bernardini) and MGISW juvenile Bast (Uncle Mo).

Nagambie was acquired for just $14,000 at the 2016 Fasig-Tipton Winter Mixed Sale. Her most recent produce was an Audible filly born Apr. 5 and she was bred back to another former Albaugh colorbearer in Not This Time for 2022.