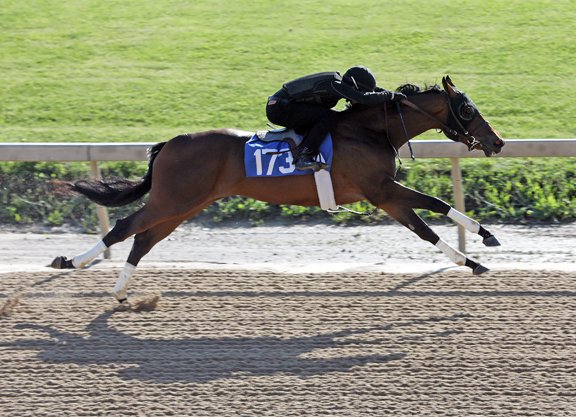 The three-day under-tack show ahead of next week's Fasig-Tipton Midlantic 2-Year-Olds in Training Sale kicked off Wednesday under picture perfect conditions with temperatures hovering in the low 70s as the first of seven sets hit the track shortly after 8 a.m. Originally scheduled for May, the breeze show attracted a good-sized crowd to the Maryland State Fairgrounds, with bloodstock agents such as Liz Crow, Patti Miller, David Ingordo, Donato Lanni, Gary Young, Tom McGreevy, Steve Young, Gary Contessa, Joe Brocklebank and Alan Quartucci in attendance, as well as trainers like Linda Gaudet, Mike Trombetta and Ron Moquett.

“He's a fast horse anywhere on any surface. He's a special horse,” said Juan Centeno, whose All Dreams Equine consigns the colt on behalf of a client. “Anywhere you go, he would do the same thing. He's been training on dirt and he's been training excellent. He performed very well on synthetic, but I wanted to show that he can do it on dirt.  If he gets into good hands, I think he has a bright future.”

Bred by Nancy Shuford, the colt is out of One Foxy Grey (Big Brown), a daughter of Grade I winner Irish Smoke (Smoke Glacken). He sold to Superfine Farms for $67,000 as a weanling at the 2018 Keeneland November sale and he RNA'd for $88,000 at Keeneland last September.

A filly from the first crop of graded winner Upstart (hip 173), the first horse on the track Wednesday morning, turned in the :10 flat work for consignor Cary Frommer. Frommer purchased the dark bay juvenile for $120,000 at last year's Fasig-Tipton Midlantic Fall Yearling Sale.

“I never expect a bullet work, but I was expecting her to work well. And we weren't disappointed,” Frommer said. “I've loved her since the day we bought her from this sale in October. Everybody who has been around her has loved her.”

The Maryland-bred filly, bred by Dark Hollow Farm, is out of stakes winner Plum (Pure Prize).

Frommer purchased 15 yearlings at the 2019 Fall Yearling Sale and admitted it was a relief to see the Midlantic 2-Year-Olds in Training sale, forced to cancel its May date due to the pandemic, return to the schedule.

“This is a very important sale,” Frommer said. “Because it's so different from the Florida sales, you draw a different crowd. A lot of people don't want to go down there, so you get a lot of New York people here and you get a lot of Maryland people. I have a lot of friends here in Maryland, so this is a really good sale for me.”

During the day's second set, consignor Al Pike sent out an Uncle Mo colt (hip 118) to work the furlong in :10 flat.

“He's worked like a really good horse all year,” Pike said of the juvenile. “He's kind of a natural. He came to hand quick. We haven't had any problems with him at all. He's never had a bad day.”

The dark bay colt is out of Miss Ocean City (Mineshaft) and is a half-brother to graded stakes winner Azar (Scat Daddy). Purchased in utero for $450,000 at the 2017 Keeneland November sale, the youngster was purchased privately by Pike after he RNA'd for $185,000 at the Fasig-Tipton Saratoga Yearling Sale.

“He was a well-bred Uncle Mo who had a lot of presence about him. He was a beautiful horse,” Pike said of the colt's appeal last year.

The colt was consigned to the Saratoga sale by Taylor Made Sales Agency and Pike admitted, “Actually Frank Taylor talked me into buying him. He promised me he was a good horse and he'll probably bust me from now on because he was absolutely correct.”

Of the track conditions during the first of three days of breezes, Pike said, “I think it played pretty well. Naturally when it gets hot it gets a little slower, but I think they did a heck of a job on it.”

Troy Winfrey's Wolf Creek Farms mostly concentrates on selling weanling-to-yearling pinhooks, but makes the occasional stop at the juvenile sales. The operation was represented by one of the furlong bullet workers when a colt by Outwork (hip 106) covered the distance in :10 flat during Wednesday's second set.

The bay colt is out of the unraced Marialua (Maria's Mon), a half-sister to multiple graded placed Honolua Storm (Old Trieste). Wolf Creek purchased the juvenile for $40,000 as a weanling at the 2018 Fasig-Tipton Saratoga Fall Sale. He RNA'd for $80,000 at last summer's Fasig-Tipton Saratoga New York-Bred Yearlings sale.

“We've always liked him. He's a big, pretty horse and he looks like he's fast,” Winfrey said of the colt. “He's a New York-bred and this is a good place to sell a New York-bred.”

Of his five-horse consignment at the Midlantic sale, Winfrey added, “We do come up here occasionally. We had some horses we didn't get sold as yearlings and then a couple client horses needed to come here. We mostly try to sell as yearlings. We have a small group of clients or partners that we've had for 15 years, so we don't do a lot. We do eight or 10 a year.”

While the market was difficult earlier in the month at the OBS Spring Sale, Winfrey is hoping the Timonium sale's close proximity to several racing jurisdictions will prove fruitful when bidding starts next Monday.

Wednesday's final :10 flat work was turned in by hip 51, a son of Speightster, during the fourth set. The gray colt is out of Izzy Izzy (Mizzen Mast) and is a half to stakes winner En Hanse (Hansen).

“I was really happy with the work,” said consignor Luis Garcia. “I know the horse can run, but this is a little track and he's a big horse. So I was kind of worried about what would happen. But he's pretty smart and he went around the track pretty good.”

Speightster, represented by his first crop to race this year, has gotten off to a quick start on the racetrack and in the sales ring. A colt by the WinStar stallion sold for $1.1 million at the OBS Spring sale and he had his first winner when Queen Arella scored on debut at Gulfstream May 29.

Garcia, in partnership with Gina Fennell, purchased the colt for

“From his ears to his tail, he's nice,” Garcia said

Despite a few recent rainy days in the area, Garcia was happy with the condition of the Timonium track.

“We had a lot of rain in the past couple of days, but these people take care of the track really good,” he said. “So I am happy with the track. It seemed like horses moved nice over it today.”

The under-tack show continues Thursday morning at 8 a.m. and concludes with a third session Friday. The Midlantic sale will be held next Monday and Tuesday with bidding beginning each day at 11 a.m.