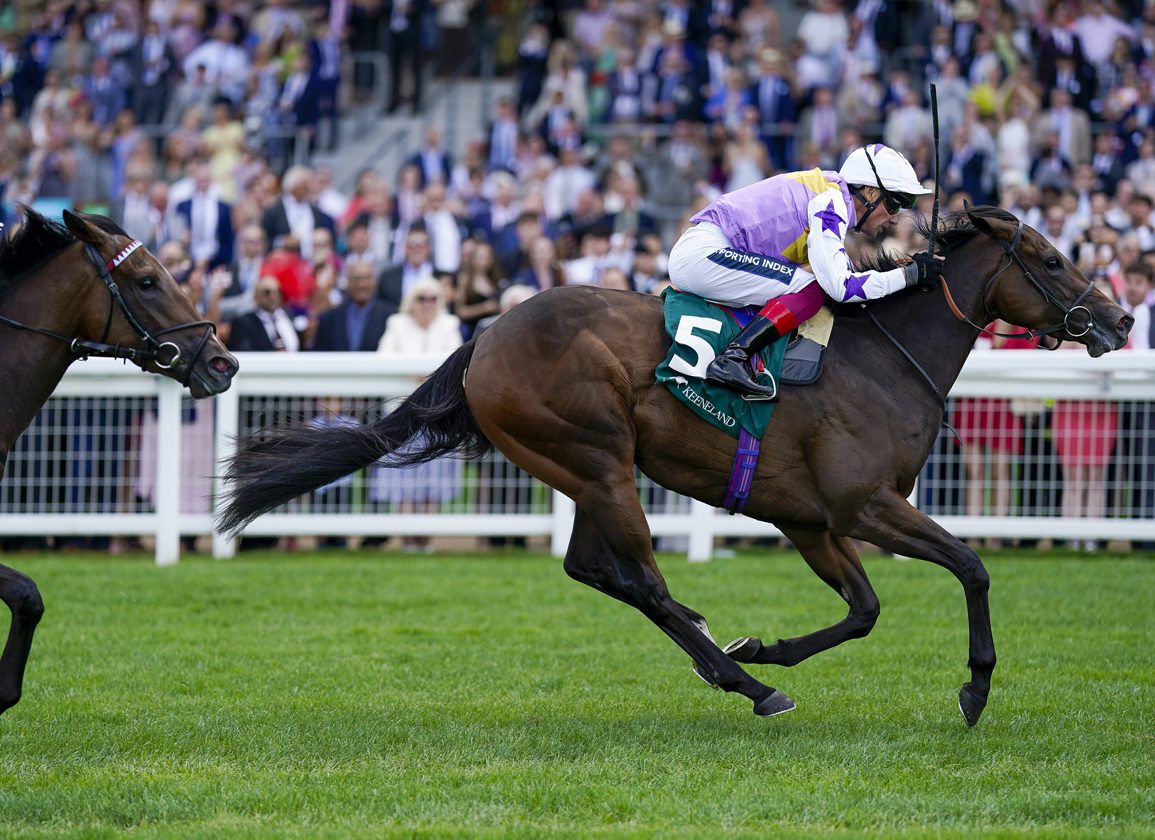 Marc Chan and Andrew Rosen's 2-year-old filly Lezoo (GB) (Zoustar {Aus}), making a swift return after running second in Newmarket's July 8 G2 Duchess of Cambridge S. last time, notched a landmark score in Saturday's G3 Princess Margaret Keeneland S. at Ascot to become her sire's first Northern Hemisphere pattern-race winner in the six-furlong dash. She had previously posted victories in a June 11 novices' heat over five furlongs at Bath and when upped to six furlongs for Newmarket's June 25 Listed Empress Fillies' S. in her penultimate start. Positioned off the early tempo after a slightly awkward exit from the stands' side stall, the 6-5 favourite made smooth headway from halfway to launch her challenge at the quarter-mile marker and kept on strongly once hitting the front soon after to withstand the late rattle of the hitherto undefeated Kinta (Ire) (Sioux Nation) by a length.

“She's a tough girl, four runs in five weeks, and I wish they were all like her,” commented trainer Ralph Beckett. “She has just thrived on her racing, it is great to get it done and now we will think about the [G1] Cheveley Park. I really didn't intend to run her here after Newmarket, I thought we would go to the [G2] Lowther as I felt York would really suit her as a racecourse, as a track as well. Andrew Rosen, her part-owner, has had horses in England for 15 years and he has never seen one of them win. He's here today, so it is a good day for all concerned. We will go to the Lowther next, probably. We will keep running her and, if she keeps going like this, we will keep running her and won't stand in her way. When the ball is at your feet, it is a good idea to kick it.”

The sixth foal from her G3 Firth Of Clyde S.-winning dam, Lezoo is bred on a similar cross to Zoustar's G3 Maribyrnong Plate winner Brereton (Aus), who is out of a Red Ransom mare. Roger Sez (Ire) is by Red Clubs (Ire), who scored his greatest victory in the G1 Betfred Sprint Cup in 2007, and is a son of Red Ransom. Her latest foal is a yearling filly by Territories (Ire).

Affair Of State (Ire) (Tate Gallery), the third dam of Lezoo, won at the listed level, and is also the dam of stakes winner Bibury Flyer (GB) (Zafonic), as well as the group-placed Hello Glory (GB) (Zamindar) and the stakes-placed Statesman (GB) (Doyoun {Ire}). Another of her daughters, the winning Star Now (GB) (Librettist), is the dam of G3 Polar Cup victor Tinnitus (Ire) (Clodovil {Ire}).