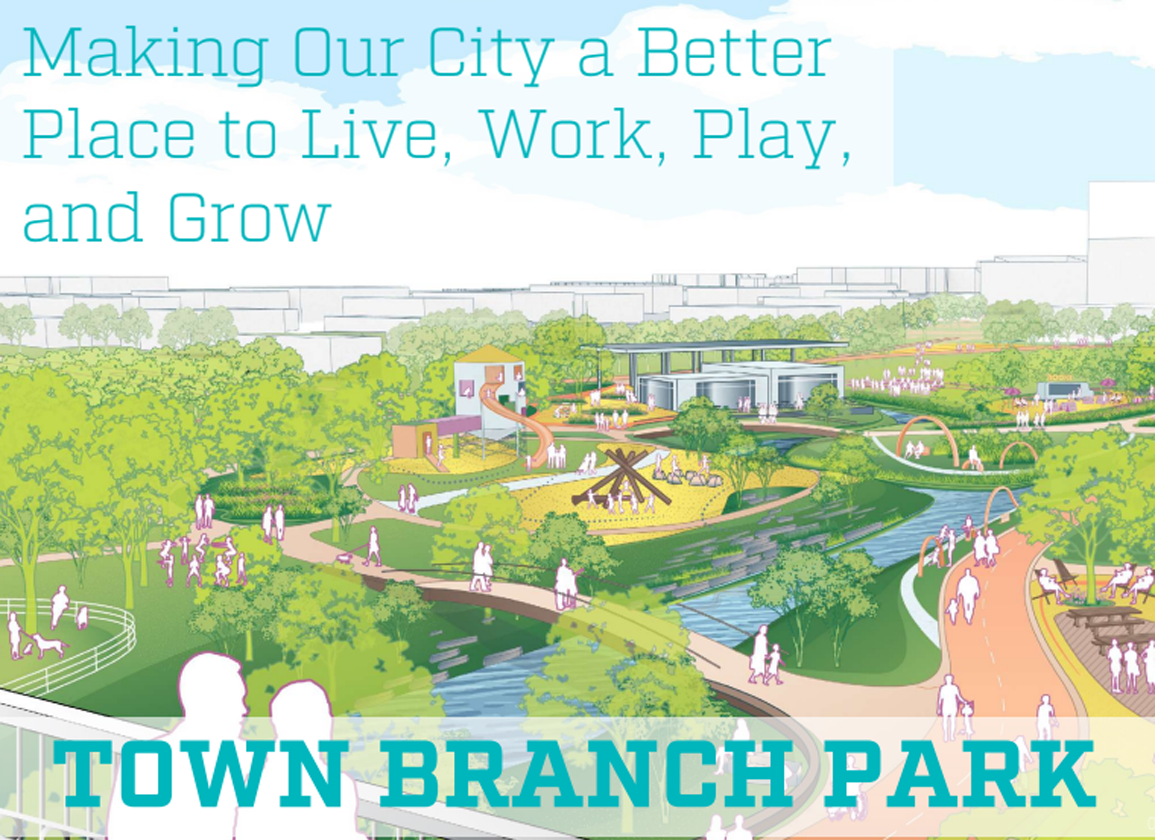 Urban parks are well-loved destinations in America's most developed and highly-populated cities. Of course Central Park is the first that comes to mind, as well as perhaps Lincoln Park in Chicago or Golden Gate Park in San Francisco. These beautifully-designed pieces of landscape architecture serve as gathering places for the city's community and are often stopping points for those visiting a bustling metropolis.

In a few years Lexington, Kentucky–with a population of less than 400,000–will get a state-of-the-art park of its own in the heart of downtown. Ground is set to break next year to transform over nine acres of asphalt parking lot adjacent to Lexington's Convention Center into a green oasis that will be called Town Branch Park.

The idea for the park was born 10 years ago as Lexington was in the midst of a major downtown revitalization project within the hospitality sector. Town Branch Park would be unique in that it would be privately funded by the community. While the city had raised $10 million or even $15 million for projects before, this one would require over $30 million in funding.

It was a lofty goal, but today the fundraising target is already well on its way to being met thanks in large part to Lexington's equine community.

Kip Cornett is the Vice President of External Affairs for the Town Branch Park project and is also on the executive committee. He explained how Lexington's signature industry has stepped up to turn the park vision into a reality.

“At this point, 26% of all the dollars that we have raised have come from the equine industry and it has really been in an unprecedented way,” he said. “The industry has always been benevolent both within the industry and locally, but this is taking it to another level. It's a really good cross section of farms, individuals and organizations with donations that range from $10,000 to $3 million. We've had people who are willing to step up because they see the vision the same way that we do.”

When plans for the park were first laid out, a key goal was to focus on bringing the Bluegrass countryside into downtown. That concept resonated with Spendthrift's Eric Gustavson, who has been a prominent supporter of the project. 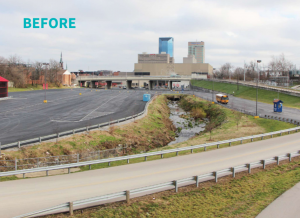 “One of the things we were drawn to is the beautiful nature aspect of it in the middle of downtown,” Gustavson explained. “We were also drawn to the ability for our team at Spendthrift to be proud of being a part of the amazing project. I think it's going to be a crown jewel for the city. For tourists, the bourbon industry and Thoroughbred industry are big draws, but I think someday on their itineraries, you'll see people wanting to visit Town Branch Park.” 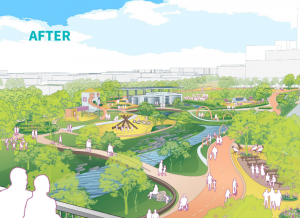 Spendthrift Farm has already committed to sponsoring the Great Lawn, a sprawling green space in the middle of the park that will resemble the rolling topography of Bluegrass horse pastures.

“With our racing and breeding industry being so related to the turf, we thought there was no better way to make that connection than to sponsor the Great Lawn,” Gustavson noted.

The Great Lawn, which will seat over 5,000 people, will be located next to the largest amphitheater in Central Kentucky called The Stage, which will be designed to host everything from local art organization and after-school programs to national touring acts.

“We wanted to make sure the park was very active and not just something that's pretty and is there for people to look at,” Cornett said. “There will be a reading room where folks can enjoy some quiet time as well as a café, a large children's playground and a dog park. It will be a highly-active nine and a half acres that we'll be able to do a lot of things with.”

“We wanted the park to be very inclusive,” Cornett explained. “We see families, college students and senior citizens visiting. The overwhelming majority of the programming will be low cost or no cost. We want to make sure that there is a lot of different options for everybody. The folks behind the park have done a really good job of talking to people to make it their park.”

Lane's End's Bill Farish is a member of the Board of Directors for the park and said he is looking forward to the positive effects the project will have on the entire Lexington community.

“I've always been aware of private parks that have been built in other cities and how successful they've been at keeping them a lot cleaner and better policed than [public] parks,” Farish said. “What's great about it is that we have a blueprint from other cities that have done the same thing and we're able to find out what has worked and what hasn't. It's something that has had tremendously-positive effects on real estate values around other parks, which lifts everything up.”

“We want to make sure that the park is first class in how it's built, but also in how it's maintained,” Cornett said. “Once we've raised the money to build the park, we will set up a significant endowment and multi-year operating budget because we want this park to be looked on in five years exactly how it looks when we welcome the first visitors. ”

The park's name originates from the historic Town Branch stream, which was once integral to the founding of the city. The waterway will be cleaned and exposed and will run through the heart of the park along the amphitheater.

Upon completion, Town Branch Park will serve as the trailhead between the Town Branch Trail and the Legacy Trail, connecting over 22 miles of protected bike and pedestrian trails throughout downtown and into the countryside and ultimately leading to the Kentucky Horse Park.

“The Town Branch Park was really the last piece of the puzzle,” Cornett said. “We think it will be enjoyable for people whether they're here every day or they're visiting. A lot of visitors stay downtown and now they're going to have a world-class park in their backyard.”

He continued, “With our fundraising, we're not finished. But without the Thoroughbred industry we would be so far from our goal that it might be difficult to reach. I think it's a very positive sign that numerous farm owners are not just people who have lived here all their lives, but people who have only lived here a few years. They've said, 'This is my city and we're a very important industry within it so we need to step up and do this.'”

“My wife and I moved to Lexington four years ago and we're proud of our new town,” Gustavson said. “We thought there was no better way to show our support for our new city than to get involved with the Town Branch project. I'm so thankful for the people who have been so committed to making this a part of our city.”

“The whole revitalization of downtown that has happened over the last 20 years has been remarkable,” Farish added. “This project would just give it so much more momentum and would be such a positive thing for downtown. It's a community-wide effort that I think benefits everybody.” 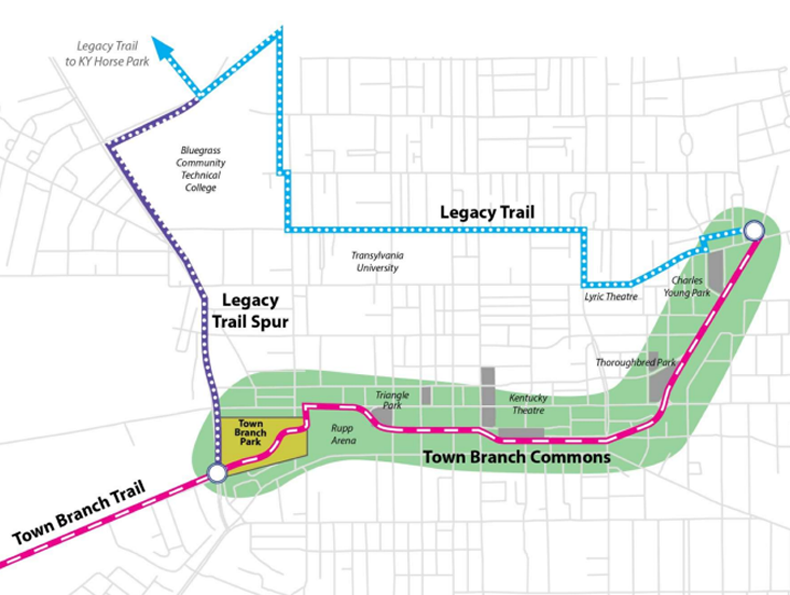 As funds continue to pour in, the team behind the Town Branch Park aims to welcome the first visitors by the end of 2024. Cornett said that along with Spendthrift and Lane's End, over 20 Thoroughbred organizations have already shown their support for the project including Godolphin U.S.A President Jimmy Bell, who is also a Town Branch board member.

“It's wonderful to see so many in our industry step up to support this project, whether it's to help honor Mr. [Ted] Bassett or to ensure that this wonderful park becomes a reality for the community,” Bell said. “Many in our industry either come from or visit cities where parks like Town Branch already exist. I think they recognize the impact those parks have there and they want to provide Lexington the same opportunity through Town Branch. Anticipating the hundreds of programs and special events to be offered yearly to our community truly adds to the vibrant atmosphere this park will provide for one and all to enjoy. This park will be transformational for Lexington and I'm very honored to be involved.”

“There's no question that sometimes people don't fully recognize what an economic engine the equine industry is in Central Kentucky,” Cornett said. “It's really the brand of the city. I think [their support] is two-fold. They see the vision of bringing the countryside into downtown and they see it as an opportunity for Lexington to continue on its path of becoming an even greater city.”

Over $7.7 million has been raised by the equine community alone, including the following donors:

The Duke and Duchess of Devonshire