Letters to the Editor: Barry Irwin 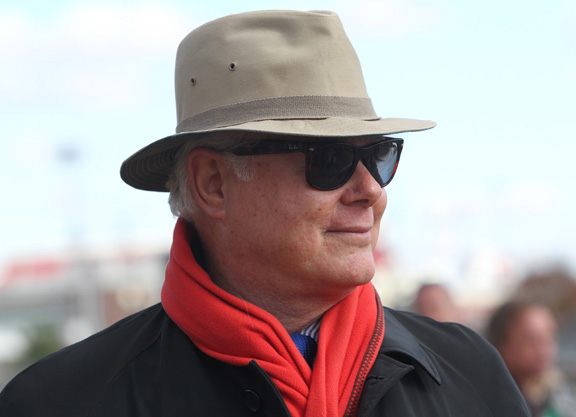 In the last 31 of my 50 years in horse racing, I have earned my livelihood forming racing partnerships. I have been able to do this because, in spite of the obstacles and challenges, enough people still want to race horses, so I have been able to continue with my enterprise.

I am involved in one segment of an industry that provides many folks and entities the opportunity to also make a living with Thoroughbreds.

But the number of people interested in the game is shrinking.

As a keen observer as well as a participant, I feel confident in saying that the ongoing contraction of the game is a direct result of cheating by the use of Performance Enhancing Drugs that tilt the playing field in favor of crooked trainers and owners interested in dominating over their rivals by illegal methods.

All of the enterprises in which folks are involved within the industry: breeding, pinhooking, sales companies, racetracks, training, writing, advertising, acting as agents–all of it–is dependent on one simple thing: the integrity of the race. Horseplayers have to feel good about the honesty of a contest to want to bet on the outcome.

The vast majority of folks in the industry are hunkered down in their own separate bunkers and do not want to have to think about the integrity of the race. They just want to keep on keeping on, because the game has been so good to them.

While these neo-Romans are content to listen to the lilting music from Nero’s strings, the world all around them is crumbling.

This week, the Association of Racing Commissioners International announced sweeping proposed changes in the severity of penalties and fines they suggest imposing on parties found guilty of cheating. They put together a blue-ribbon panel of well-intentioned industry experts to come up with the framework.

My response to yet another committee, board or group coming up with something that has teeth in it is as follows: wake me when it’s over please.

My problem is that no matter how many rules, substandard tests and other measures are introduced, one thing in the struggle to rid the game of cheats remains constant: no jurisdiction in all of North American racing has yet shown the will necessary to move the ball an inch.

Having been a civil servant for seven years in the Los Angeles County Probation and Civil Service Departments, and having interviewed plenty of stewards and regulators as a turf writer over the years, I know one thing for sure about regulators and stewards: like Congressmen, their main goal is not to lose their jobs. So in order to achieve this lofty goal of survival, they feel it is incumbent upon them not to rock the boat. They embrace the status quo. So counting on racing regulators to save our game from cheats is a foolhardy concept to begin with.

As I see it, our industry’s only chance to clean up the game and insure the loyalty of the horse-playing public is to get behind Federal legislation to install USADA as the overseer of drugs in racing. And I say this not merely as the guy who originally came up with this notion in an Op/Ed many moons ago, but as somebody who does not want the game to wither away and die. USADA has the chops, the mojo, the know-how and the desire to clean up racing.

It’s been a long time between swallows since racing even had a face of integrity, back when J. Edgar Hoover appointed a former G-man named Spencer Drayton to head up the Thoroughbred Racing Protective Bureau (TRPB).

USADA can bring an Elliot Ness-like urgency to the task of bringing crooks to accountability by good old-fashioned and modern policing methods. They are an independent body that owes nothing to any one pressure group or entity in racing.

And that’s the rub right there sports fans, because groups representing racetracks, trainers, veterinarians, regulators and horseplayers all want to be involved to protect their own turf. Hey, that’s what we have right now and it is not working.

One would hope that the dustup and lack of industry coordination over the 23 horse deaths at Santa Anita would have impressed members of the Thoroughbred industry enough to make them realize that our game is one ballot initiative by PETA away from extinction. So any thinking man or woman should have realized that racing needs to get its house in order.

Is the mood right for trainers, veterinarians and owners to realize that it is time not only to close the medicine cabinet, but to address the elephant in the room?

People: the biggest names in the game are trashing our sport by the illegal use of PEDs and they are flaunting it right in our faces. They are rubbing our clean-scrubbed faces right in the muck pit.

Are we going to stand up and do something about it? Or are we going to continue to ignore it or simply complain about it to our wives?

Let’s reach out to our leaders of the alphabet organizations and tell them to start representing us as responsible participants in the industry and get real.

C’mon ladies and gentlemen. Let’s have an industry we can be proud of. Isn’t that what it’s really all about?