Letter to the Editor: Andrea Branchini 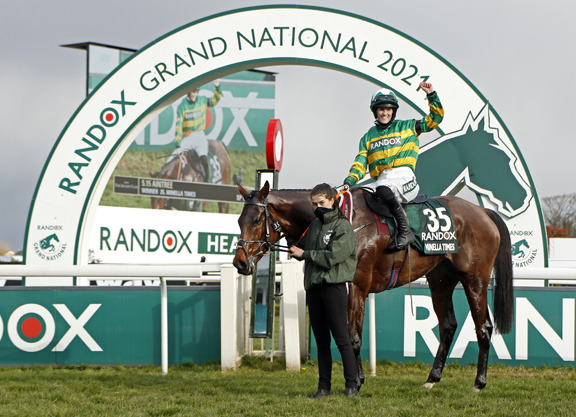 My fellow Americans, I put it to you that the 2021 Liverpool Grand National was an epoch-making sporting event –like the sub-4-minute mile of Roger Bannister in 1954 or the first MLB game of Jackie Robinson in 1947.

In the 1944 movie “National Velvet” a very young Elizabeth Taylor faints and slides off her beloved horse Pie after having crossed the finish line first in the Grand National–that mad race where 40 horses and riders are to jump 30 high fences over 4 1/2 miles.

The after-the-finish fall is what screenwriters call a “plot device,” so that Velvet (Taylor) and Pie can be disqualified without an unpractical and probably unfilmable reveal in the winner's enclosure. It is actually an ingenious little stratagem, because it stands to reason and is very credible that a 12-year-old girl could be totally exhausted at the end of a marathon ride that even professional jockeys find challenging.

The actual race lasts close to 10 minutes–an eternity in horseracing. Usually, the public commentary is in fact a relay of different commentators, as it is too big a job for just one voice and one single pair of eyes.

The Grand National has always been a unique legend-making legend. This is no exaggeration. The reasons why are many and would call for a long Power Point in a lecture.

Here is a short sample: the 40 horses' start seems a cavalry charge in Napoleonic times; the betting is hysterical, with the favorite usually at 8-1 or thereabouts; the race begins and ends in a racetrack proper, but most of the action takes place on two circuits over country fields perimetered by single lines of spectators (a bit like an Olympic marathon).

Special characters, portentous stories, incredible anecdotes pour from the history of the race like fresh water from a spring: the amateur of amateurs Duke of Albuquerque (find a better name!), who should have paid regular rent at the nearby hospital; cancer-recovered Bob Champion winning in 1981 and immortalized in another major motion picture; Devon Loch, the mount of Dick Francis (yes, that Dick Francis), that spread her four legs to the ground in a belly-flop when in view of the finish line; riders Marcus Armytage and Hywel Davies leading the race in 1990 and discussing the pace {“Are we going too fast?”); the supposed shiver of unhappiness that horses emit when they understand they have to go for a second lap–and so on, the material is endless.

This is definitely a race for dreamers of all types, an event that is notoriously most loved by individuals who first watched it on TV as little children (this writer included).

Then, on top of all of the above, as if it was not enough, came perfectly-cast Rachael Blackmore from County Tipperary, Ireland, to win a race in which women could not legally ride until the mid-1970s. That is why, in the Hollywood fiction of “National Velvet,” Liz Taylor had to impersonate a male jockey to ride her horse Pie in the race.

Rachael Blackmore is simply so great a jockey that her victories in the field shut everybody up–just like Joan of Arc. “I do not feel male, I do not feel female, I do not even feel human,” Rachael Blackmore said to a journalist while walking her horse to the National winner's enclosure. Those words may read otherwise on the written page, but resounded with the great humility of truth when they were spoken. A racing journalist lived dangerously (“I can feel male jockeys will not want to talk to me anymore”) when he said on TV that Rachael Blackmore's greatest asset is her intelligence. “You cannot pick her out in a race, she is just a great jockey,” said retired professional rider Chris Grant, who was second three times in the Grand National, once agonizingly close.

My fellow Americans, I put it to you that the 2021 Liverpool Grand National was an epoch-making sporting event. And I leave it to you.