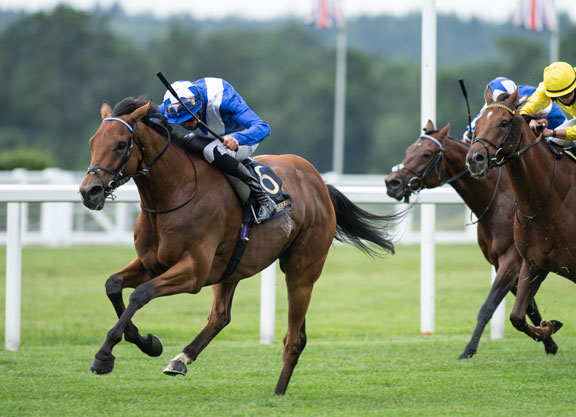 Are you lucky enough to be a real fan of the industry you live and work in? I am.

And my new hero is Ian Bartlett. Never met the chap, but he

is a well traveled race commentator for more than 31 years, with stints in his native England for the BBC, and for

races in Ireland, France and Dubai. And now he is the voice of Royal Ascot.

I urge you to listen to his outstanding race calls at The Royal meeting, which is just a five-day stand through this Saturday. He is announcing the races just for you, just for the television audience at home.

It is a far different call from what you hear whilst watching at the track, where you have your binoculars trained on the field, or listening to the radio.

What is so terrific about Ian's descriptions is that he identifies in his call the horses, as many as 30 in some races, by the obvious colors of the silks the rider is wearing. In addition to the placement of the runners, the margins between horses, their on-course positions inside, outside or between rivals, and sometimes even their rank in the betting ring from big gamble favorites to extreme longshots. For those of us at home, he tells us exactly where the steed or steeds we are rooting for actually are as the event unfolds.

No need for the 'chicklets' at the bottom of the screen that we get used to from some tracks.

On Day 2 of the Royal Meeting, Bartlett described how the lead changed among three runners in the final furlong of The Hampton Court S. Berlin Tango (GB) (Dansili {GB}) tussled with First Receiver (GB) (New Approach {Ire}) and looked like a winner. But First Receiver inched forward to get his head in front just as Russian Emperor (Ire) (Galileo {Ire}) swooped down at the wire to win. It was such a great timing job, that I believe if Ryan Moore would have ridden either of the other two horses in that final eighth of a mile, he would have won, no matter which of the three he rode. That was his 60th winner at Royal Ascot, a testament to his great ability to know where that finish line is, and how much horse he has left.

In The Windsor Castle S. I think Mr. Bartlett had to zero in on Tactical (GB) (Toronado {Ire}) because he was the sentimental favorite of the entire day, owned by the 94-year-old monarch of the United Kingdom, Queen Elizabeth II. A very popular victor.

In the feature, the G1 Prince of Wales's S., I know many family members were watching, and not just from their homes. James Doyle won the race on Lord North (Ire) (Dubawi {Ire}). His sister, Sophie, is riding now in Kentucky. This family affair also includes Jacqueline Doyle, former show jumper, trainer par excellence and the mum of these two current excellent riders.

And a word about the time between races. Here we often hear trainers complain about running their horses with only weeks between engagements. May I point out that Russian Emperor (Ire) (Galileo {Ire}) competed only eight days ago in a hundred grander Derby Trial at Leopardstown in Ireland.

And finally a personal memory. The most memorable race I ever saw was Secretariat (Bold Ruler) winning the 1973 GI Belmont S. After that, a distant number two is Dubai Millennium (Seeking The Gold) with Jerry Bailey aboard winning the 2000 edition of the Prince of Wales's.

A lot to look forward to for the rest of the week, and a few more memories to be made for sure.