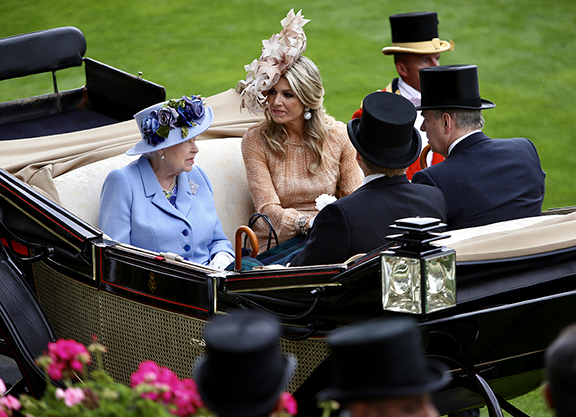 Procession at Royal Ascot in 2019 | Horsephotos

Forget Junes in years past. Forget the top hat and tailcoat.

Forget the long airline flight to London. Forget the face mask and gloves.

It's a new world in 2020 for those who love top-quality horse racing and believe that “mass follows class” on both sides of the Atlantic.

Now in the light of COVID-19, the unique Royal Ascot meet will take place on the same heath behind closed doors for the first time since 1711, when Queen Anne decreed that the beautiful flatland just a mile or so from Windsor Castle would be the site of top quality horse racing.

For most of the past 26 years, I would have been trying on the pants, vest and tail coat that was required in the Ascot Royal enclosure. It seemed like every June the vest needed a bit more give and the pants needed every inch of the extra waistband. This year I can wear shorts and a tee shirt at home.

Instead of the relaxing one hour clickity-clack journey on the southwest rail line from Waterloo to the Sunningdale station, now it is just steps from my home office to my television room, where this week both sets will be tuned to the Thoroughbred sport, and a computer to my wagering racing website.

This year is a great opportunity not just for sports fans, but for everyone to join the worldwide crowd for a totally different experience through 2020 media. Throughout these five days, starting Tuesday, one can enjoy not just the great racing. It is quite a menu, beginning in the mornings with a jockey fitness session providing an eye-opening insight into the sorts of fitness regimes professional jockeys must maintain. The little guys have to be strong and agile.

For more than three centuries, at 2 o'clock sharp London time, the Golden Gates would swing open and a procession of horse- drawn Landau carriages would trot up the stretch carrying members of the Royal family and racing personalities, as the band played the national anthem. This year no processions, but we can watch great historic videos of past Royal processions, treating us to scenes of Queen Elizabeth, as a young monarch in the 1950's. She is now 94 years old and will be watching on the telly, as we will be.

Image galleries showcasing fashion and sport photography from the past, along with a cooking show of Royal Ascot specialties by Michelin Star chefs. There will also be a competition, reminding me of the Bobby Flay throw-downs. This year it's the 'Coronation Chicken Stakes.'

I don't have children, but Ascot is making an activity pack for kids, which includes a design-your-own jockey silks guide. Not a bad idea to get the kids involved in racing very early.

Last year I remember a press release said that 80,000 cups of tea, in addition to a quarter million tea cakes and scones were served. This week instead of tea and scones, the Ascot kitchen will serve up the recipe to those watching on how to create your own VIP tea.

I'm not the target market they want for the sale of Ascot Jockey teddy bears. And I never did stay for the singalong  around the Bandstand, I wanted to get back to the city for a

cocktail hour. But the songbook is available on the Ascot website for the stay-at-home singers. Also on the website each day will be a different Ascot Signature Serve cocktail recipe, including the Royal Ascot Blush and Monkey Went To Ascot.  I'll stick to a Manhattan whilst overseas.

As frivolous as some of these promotions might seem, you must salute them for the creative initiative. Our industry today

should be taking the advantage of the immediate lack of live major sporting events, instead they seem to keep shooting themselves in the foot. I'm sick of petty feuds spoiling the

game for us players. And American racing should notice or maybe even copy some of their promotional ideas.

As for our American heroes, the Cambridge-born Graham Motion (yes, you can still detect the accent) is sending Sharing (Speightstown), winner of the GI Breeders' Cup Juvenile Fillies Turf, for the G1 Coronation S. on Friday. I like her chances off the excellent prep race she won at Churchill Downs and the jockey. Superstar Oisin Murphy has won races all over the globe and recently guided Kameko (Kitten's Joy) to a resounding success in the G1 QIPCO 2000 Guineas at Newmarket.

Washington-born Wesley Ward has the best record of any non-English trainer, with 11 Royal winners. Hard to believe that this 52-year-old was the Eclipse Award-winning apprentice rider in 1984. He will send out six runners from his stable this week and knows his way to the winners enclosure anywhere in the world. For the first year he is represented at this meet, he will be watching from Florida, with top hat and tails ready for next June.

If you have a bucket list, a trip to the Royal meeting at one of the greatest race courses in the world should be on it. This year get a flavor of what it is like watching this magnificent show on television, like me, Wesley, Graham and the Queen of England.

Editor's note: Dave Johnson is a racecaller and sportscaster (famous for his signature `And down the stretch they come!') whose streak of 25 consecutive Royal Ascot meetings was ended by the Coronavirus pandemic this year. His annual Letters from Ascot will be written this year from his home in New York City.