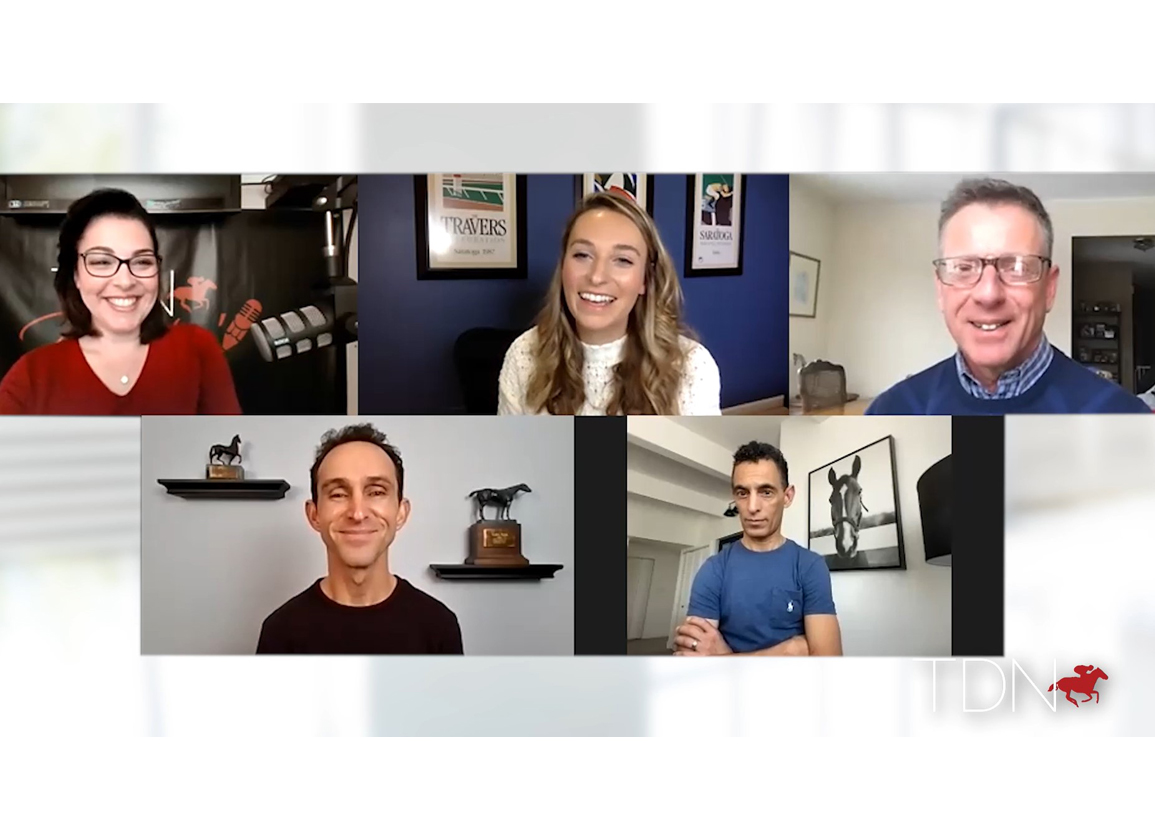 The TDN's 'Let's Talk'–a podcast series featuring TDN's Christina Bossinakis and TVG's on-air analyst Gabby Gaudet, offers candid discussion on personal, and sometimes difficult, topics that are often uncomfortable for many to speak about in an open forum.

The latest edition presents a trio of successful jockeys–Journeyman John Velazquez and retired Ramon Dominguez–both in the Hall of Fame–in addition to retired rider Richie Migliore, currently serving as a NYRA and FOX Sports on-air analyst.

Few will dispute the fact that jockeys are the iron warriors of horse racing. Physical danger is a very real part of the every day existence of a rider, as is the continual adversity they are forced to endure and adapt (and react) to.

“You really don't know what is going to happen,” admitted Dominguez. “It's different, perhaps for a jockey or it is magnified compared to other athletes, mostly because the athletes prepare and train for a specific game or perhaps for a season. Jockeys have a never-ending season–year-round racing. Even if you have a great business, doing well and had an amazing day, you have to turn the page. Because tomorrow, you can fall into a slump and things change. That [concern] is always in the back of your mind.”

Having faced more than his share of adversity, Migliore retired from the saddle in 2010, and Dominguez followed suit three years later after also facing a career-ending injury. Velazquez, who continues to compete at the highest level at age 51, also faced serious injury at several junctures in his career, however found himself among those fortunate to return to the saddle, time and again.

“For every jockey, for every athlete, there's a last ride, there's a last at bat, there's a last play,” said Migliore. “And if you're fortunate, you get to choose when that last ride is like Chris McCarron, Jerry Bailey and Pat Day. They accomplished amazing things and they made a decision that it was time to step away. The vast majority of riders don't get that opportunity. So, I tell young riders there will be a last ride and, hopefully, you get to choose last. But that's why you owe it to yourself to make the most out of the time you are able to ride.”

While the physical stress and adversity that riders face are well documented, the emotional difficulties that jockeys often face can be as prevalent, although not as easily observed by the masses.

“Unlike Ramon who was in the midst of his prime, I was in the back nine, the twilight of my career,” added Migliore. “Physically, I wasn't what I once was. Mentally, I could still see a race well, still had a great judge and feel of horses, but I certainly wasn't in what I would call my prime. Even though it was, admittedly, towards the end, I was 44 when the accident happened, and it still sent me into a deep, dark place. I went into a deep depression. Not originally when I first got out of the hospital, but when I was home. I didn't feel good, and I didn't care. I didn't care about horse racing or riding. Three or four months later when I started to feel better, and the reality was 'you're never going to do that again,' I really got depressed.”

It is widely understood that the challenges facing riders can be great, however, unity in racing can be equally strong, a bond reinforced by the necessity of taking care of one's own.

“It's funny because I always felt I had support,” said Velazquez. “And you always have the doubters, though. But I always focus on the people who want to give me the opportunity and forget about those, those people who doubted me from the get-go.”

And that support extends to the next generation of riders, which Velazquez admits is an important factor in keeping the playing field safe and equitable for the entire jockey colony.

“The more you teach those kids, the safer it is for you to ride,” he said. “You want to ride with the more knowledgeable rider rather than the kids that are more reckless. The ones who don't want to listen or to learn are the ones that make it scary to ride with. They want to learn the hard way. So, you have to show them the right way.”

To listen to the audio only version of 'Let's Talk,' click here. For the video version, click here.