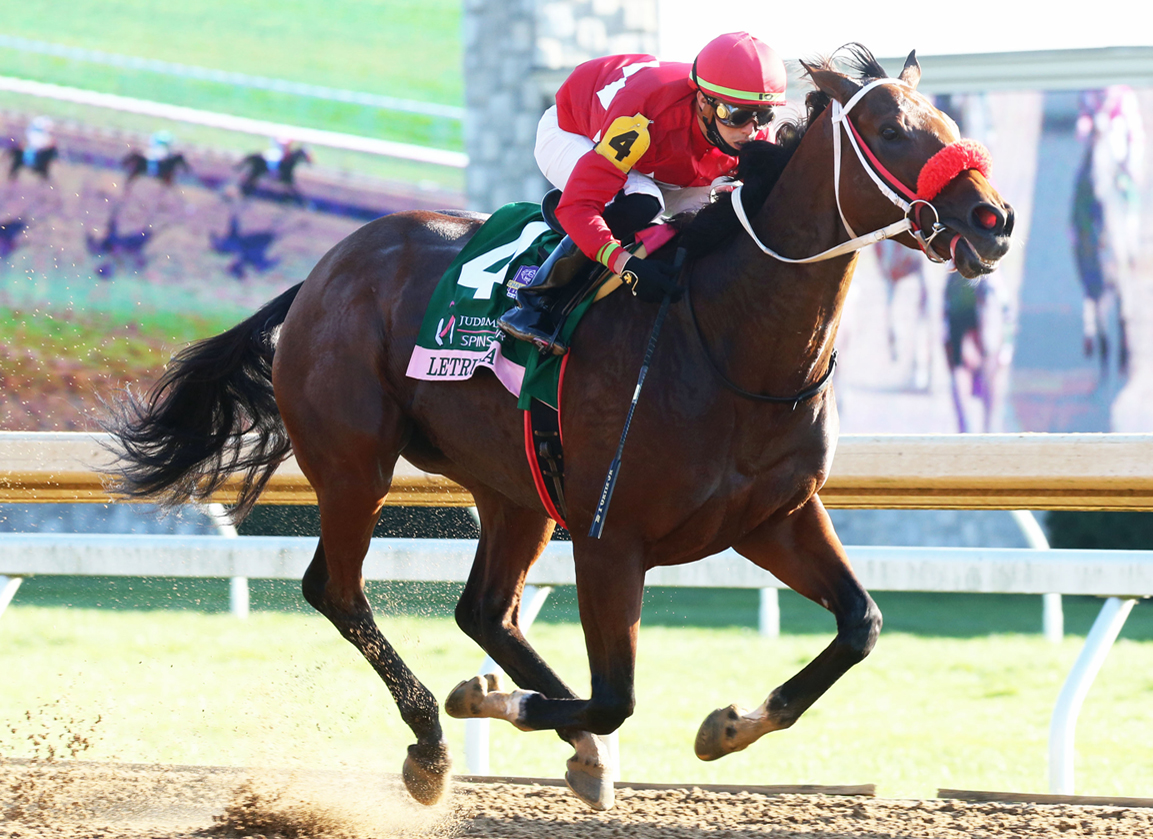 Popular star distaffer Letruska (Super Saver) took another step toward a potential Horse of the Year trophy Sunday at Keeneland, rolling to her fourth Grade I victory and sixth graded stakes win overall on the year as a heavy favorite in the GI Juddmonte Spinster S.

A dual Group 1 winner in Mexico for Fausto Gutierrez in 2019, Letruska stamped herself as a horse to watch with an impressive wire-to-wire score in last summer's GIII Shuvee S. at Saratoga and, after disappointing when finishing a well-beaten fourth in Belmont's GII Beldame S., added open-lengths graded stakes successes in the GIII Rampart S. and GIII Houston Ladies Classic S. over the winter. A narrow second in the GII Azeri S. at Oaklawn, the 5-year-old sent a seismic shock through the racing world when improbably re-rallying to stun dual champion Monomoy Girl (Tapizar) in the GI Apple Blossom H. Apr. 17 in Hot Springs. She then added a 2 3/4-length conquest of the GI Ogden Phipps S. and came back three weeks later for a 5 3/4-length romp in the GII Fleur de Lis S. before fighting off a host of challengers to annex the GI Personal Ensign S. last out Aug. 28 at Saratoga.

Away with all the money on to keep it rolling in this first career start at Keeneland, the bay broke as cleanly as Gutierrez could have asked for and established command in the first handful of strides under regular rider Irad Ortiz, Jr. Shaking loose from her nearest pursuers with ears pricked heading into the clubhouse turn, Letruska clicked off moderate fractions of :24 flat and :47.89 while moving easily in the clear. Crystal Ball (Malibu Moon) tried her best to take a run at the chalk as three-quarters went up in 1:12.52, but was always under more pressure than Letruska and dropped away by the top of the lane. Distant second choice Dunbar Road (Quality Road) began to make up marginal ground passing the eighth pole, but was never a realistic threat, and Letruska bounded past the wire a victress for the 17th time in her remarkable 22-race career.

“This is a horse to change the life of any person,” said Gutierrez. “She's a superstar and she proves [it] every second, every race. She shows her game, her ability at Churchill, at Oaklawn, at Saratoga. She's a racehorse.”

“She's doing so good right now,” added Ortiz. “I think she has great condition, a good trainer. She's doing unbelievable right now. She was just moving smooth out there. She didn't go that fast today but she did it easy, relaxed, and whenever I asked her she was there for me.”

One of 32 stakes winners, 16 graded stakes winners and seven Grade I winners for 2010 GI Kentucky Derby hero Super Saver, Letruska is the third black-type performer and second black-type winner from seven foals to race out of GSP Magic Appeal, a half-sister to GISW and sire J P's Gusto (Successful Appeal) and the dam of dual Canadian champion Miss Mischief (Into Mischief). Second dam Call Her Magic (Caller I. D.) was an eight-time winner in 14 career starts and ran a 107 Beyer when airing in a turf sprint stake by 6 3/4 lengths at Delaware in 2000. She is also a half-sister to the dam of 2008 GI Kentucky Oaks winner Proud Spell (Proud Citizen). Magic Appeal, a $100,000 Keeneland November pickup by Letruska's owner/breeder in 2015, has an unraced 2-year-old Hard Spun colt named Ocotzingo, a yearling colt by Arrogate and a weanling filly by Malibu Moon. She was bred to Curlin this spring.