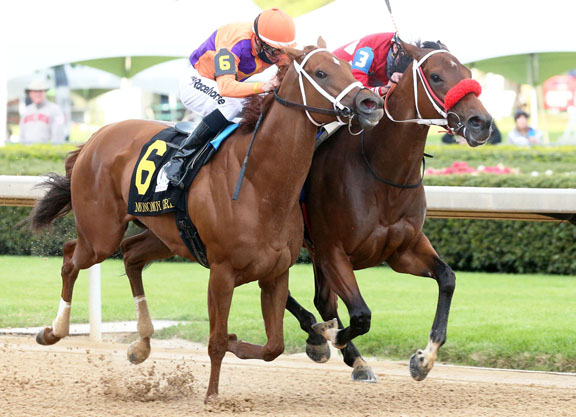 The contrarians were out in force all across social media since the Apple Blossom was drawn Tuesday, reasoning that Letruska had the speed to lead the field and was a danger to take them all the way. Turns out 'they' knew.

Last year's GI Preakness S. winner Swiss Skydiver, exiting a dominant 4-year-old debut in the GI Beholder Mile S. last month, was kicked away from gate two by Robby Albarado, but the lead was short-lived, as Letruska was hustled along by Irad Ortiz, Jr. and set the pace from the two path through an opening quarter in :23.56. She left the rail open down the backstretch, did Letruska, allowing Swiss Skydiver to hold her spot at the fence, 3/4 of a length behind, while Monomoy Girl was sitting her usual trip in the clear, ridden by Florent Geroux like the best horse in the race.

Letruska continued to gallop them along comfortably as they approached the second turn, and Florent Geroux slipped the odds-on favorite a bit more rein, sidling up next to Letruska nearing the stretch. Albarado was committed to riding for luck along the inside, and the gap did come at the rail, giving her a shot were she equal to the task. She was soon beaten, however, and it was Monomoy Girl who looked to have the momentum as she surged to a clear advantage a furlong and a half from home. The champ held the call into the final sixteenth of a mile, but Letruska–in receipt of six pounds–remained in for the fight down towards the inside and was up in the nick of time.

“The instructions were: 'We are the speed of the race,'” said winning trainer Fausto Gutierrez, who also conditioned Mexican imports Kukulkan (Mex) (Point Determined) and Jala Jala (Mex) (Point Determined). “She started a little bit slow in the last races. I told Irad [Ortiz, Jr.], 'No matter if this happens, you try to move and go in front and set the pace and make the others think: What do you have to do?'”

He continued, “When [Monomoy Girl] took the lead and I saw Swiss Skydiver start to go a little bit back, in my mind, I thought second is very good. We finished close. She started to come back and come back. I didn't see the picture very clearly. I went carefully to check the replay and I thought, 'Oops, we won.' For me, this is incredible because I come from a small racetrack in Mexico City. This horse started her career there. We had the confidence to send her here (United States) and she started to improve, improve and improve.”

A perfect six-for-six in Mexico, Letuska won the restricted Copa del Caribe in her U.S. debut in December 2019 and made Gulfstream's Added Elegance S. her first win at stakes level last June. A weakening fifth in the GI Ballerina S. at Saratoga Aug. 8, she was given an aggressive ride by Joel Rosario and held on for a one-length success in the GIII Shuvee S. Aug. 30, but was no better than fourth after setting a suicidal pace in the GII Beldame S. at Belmont Oct. 4. Letruska shed the blinkers and romped in the GIII Rampart S. in Hallandale Dec. 12, was the easy winner of the GIII Houston Ladies' Classic Jan. 31 and missed by a head to last year's GI Kentucky Oaks heroine Shedaresthedevil (Daredevil) in this track's GII Azeri S. Mar. 13.

Letruska, purchased in utero for $100,000 at KEENOV in 2015, is the fifth Grade I winner for the expatriated Super Saver and is one of three black-type performers for her Grade II-placed dam, a full-sister to Grade I winner J P's Gusto and a half-sister to Kid Majic (Lemon Drop Kid), the dam of two-time Sovereign Award winner and GSW Miss Mischief (Into Mischief) and MSP Mind Out (Tapit). Letruska's third dam produced Pacific Spell (Langfuhr), whose daughter Proud Spell (Proud Citizen) won the 2008 GI Kentucky Oaks en route to an Eclipse Award; SW No Distortion (Distorted Humor)l; GSP Proud Pearl (Proud Citizen); and SP Really Proud (Kitten's Joy). Magic Appeal is the dam of the 2-year-old colt Ocotzingo (Hard Spun), a yearling colt by Arrogate and is due to Malibu Moon for 2021.