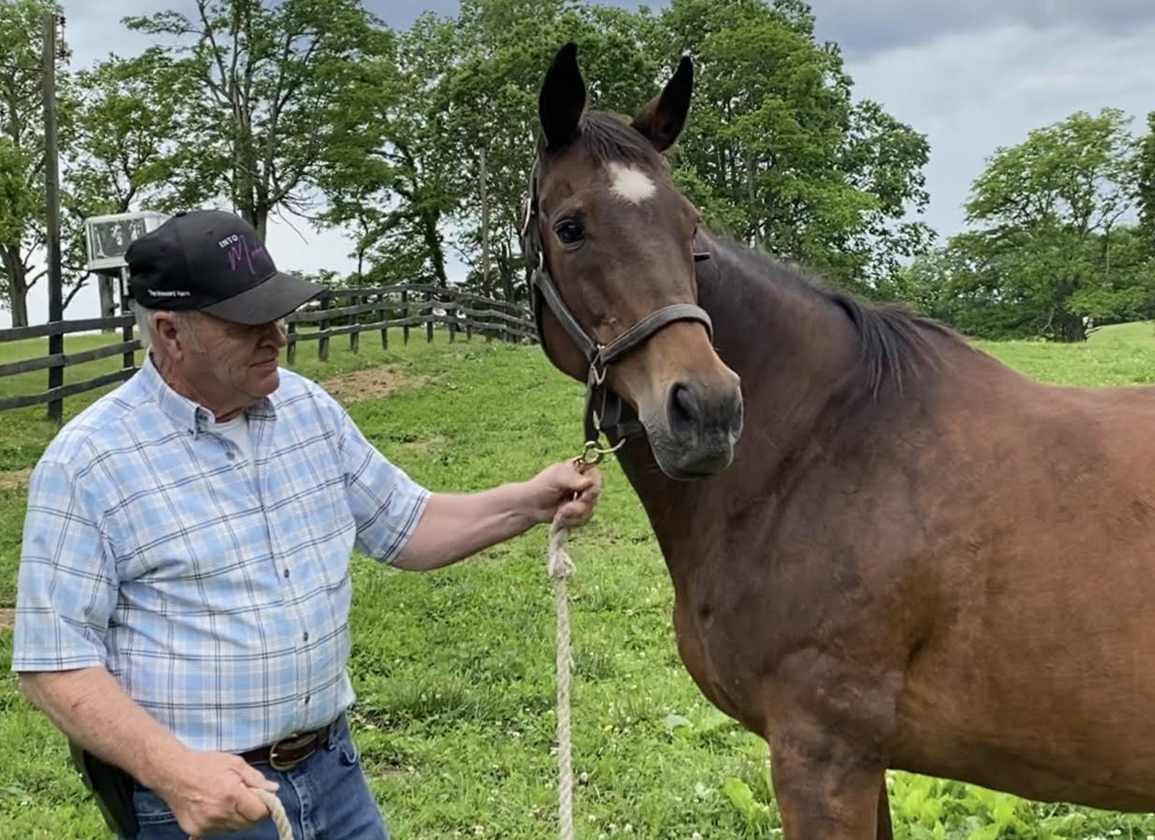 Leslie's Lady has three fillies that have yet to reach the starting gate. We visit the 2016 Broodmare of the Year at Clarkland Farm.

“Leslie's Lady is retired,” Clarkland Farm's Fred Mitchell reported. “And she is happy, fat and dappled.”

The 2016 Broodmare of the Year has produced two fillies following America's Joy (American Pharoah), a now three-year-old half-sister to GISWs Into Mischief, Beholder and Mendelssohn and the highest-priced yearling filly in Keeneland sales history.

While Leslie's Lady is now 25, a good deal of thought went into the decision to officially retire her this spring.

“Early on in the season she was all dappled out and looked like a 14-year-old mare,” Mitchell said. “She was cycling but I said, 'I'm not sure if I want to breed Leslie. She's been so good to us.' But when it got to be April, I said if she cycled I might breed her because I looked at her out running across the field, up on her hind feet bucking and kicking with her buddy. I started to tease her after that and she hasn't cycled since so she made up her mind for me and I didn't have to make the final decision.”

The bay daughter of Tricky Creek now has three fillies in the pipeline that have yet to see the starting gate.

The first is America's Joy, the $8.2 million purchase by Whisper Hill Farm. The sophomore has almost a dozen recorded works at Whisper Hill's training center, but Mitchell and his family are still reliving her Keeneland September Sale two years ago.

“When we took the American Pharoah filly to the sales, I was hoping maybe we could top the sale with her because we had done it with Mendelssohn and that was a dream come true,” Mitchell said. “When the sale started the first day, there was a $2.5 million yearling and I said sale topping was now out of the question. Then the next day, a $4 million colt came. A couple people came by the barn and said she was going to bring more than that.”

Mitchell didn't start to believe them until the walkover to the back walking ring.

“There were cameras all the way from the bottom of the hill,” he recalled. “When we got to the sales ring, there was hardly any room with people with their cameras out taking picture after picture. I had never seen so many spectators. Then when she went in the ring and passed the $4 million mark, I said, 'What is going on?' I just couldn't believe it.”

“It was something you never could have dreamed of,” he continued. “It doesn't leave us much to shoot for from now on so I think that's our plateau. It has made life a lot easier for [wife] Nancy and I. We can now be taken care of no matter what age we get to and we know the kids have enough to be taken care of. The American Pharoah filly made that possible, her and Leslie.”

Knowing it would be nearly impossible to top the American Pharoah filly's accomplishments in the sales ring, Mitchell decided that Leslie's Lady's next foal, a daughter of Not This Time,  would remain under the Clarkland banner for his family's next generation.

“I thought it would give the girls a nice start on a broodmare band later on and give them something to look forward to,” he explained.

Now a juvenile in training with Brad Cox, the bay filly is named Marr Time in honor of Nancy's ancestor John Wesley Marr.

“He was an old guy that never changed his clocks,” Mitchell said. “He stayed on Central Standard Time year-round. He would say, 'When the sun changes and my horses and I know that the time changed, I'll change. But not 'til then.'” 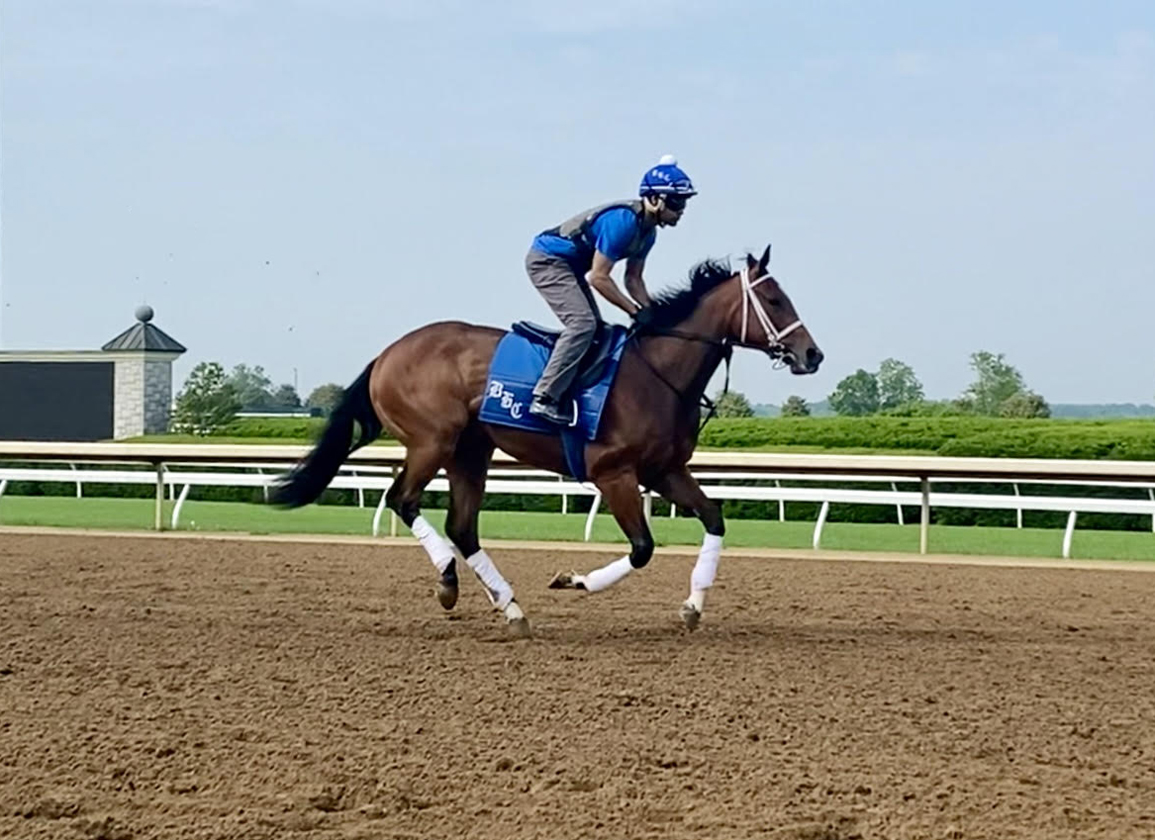 Marr Time floats over the track at Keeneland.

Mitchell said he found the May-foaled Marr Time to be very similar to America's Joy.

“She was exceptional from the time she was a foal,” he said. “The American Pharoah might have been a little bit bigger as a foal, but Marr Time is a lovely filly and a good-moving filly. Brad [Cox] says he's satisfied every time they breeze her and says she's a classy filly. It keeps you excited and hopefully she'll make it to the races, break her maiden and go from there.”

Mitchell said he chose to send Leslie's Lady to Not This Time, then a $15,000 second-book sire, because each of the star broodmare's Grade I winners hailed from the Storm Cat line.

“Not This Time wasn't the most popular horse when he went to stud, but he was well-bred,” he said. “I loved him. He was gorgeous. After he came out last year with the 2-year-old runners, I wasn't so dumb after all.”

The next year, Mitchell decided to send Leslie's Lady back to another Storm Cat-line sire in Kantharos. The famed mare produced another filly and again, Mitchell determined that this one would stay with their family. He named the bay Love You Irene after his mother.

Now a yearling, Love You Irene is thriving at Clarkland.

“She's almost a June foal but she's a very nice individual and a very good-moving filly,” Mitchell said. “She's very pleasant to be around except when she gets a little teed off. She will take a hunk out of you, which I like to see out of fillies.”

Mitchell said they're still unsure of where this filly will land when it comes time for her to go to a trainer, noting that he currently has four juveniles in training with four different trainers and will make the decision based off those results.

Clarkland famously purchased Leslie's Lady at the 2006 Keeneland November Sale for an even $100,000. She was offered in foal to Orientate and had a yearling colt by Harlan's Holiday in the pipeline. Just over a year later, that colt won the GI CashCall Futurity. 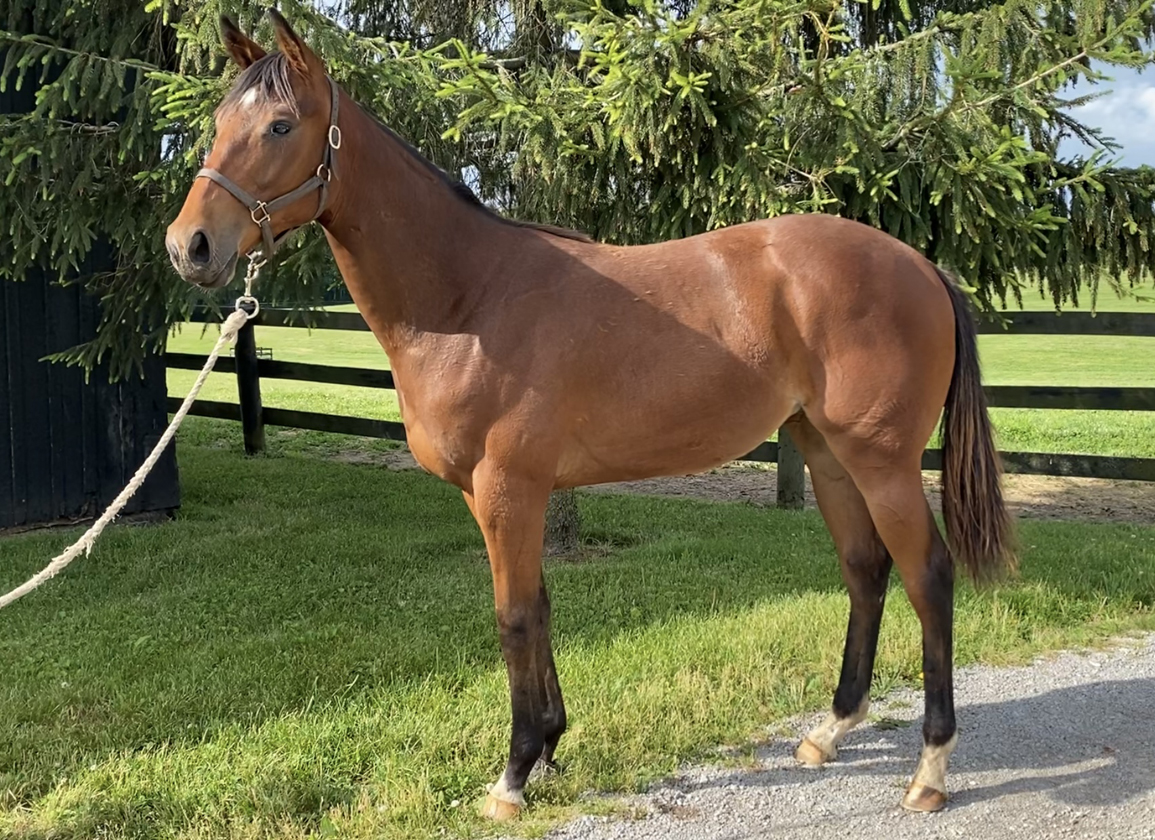 Love You Irene, by Kantharos, is the last foal out of Leslie's Lady.

“When Into Mischief won his first stake, they came to me and wanted to know if I would sell Leslie,” Mitchell recounted. “They got to throwing out some pretty good figures. I said, 'No, Leslie is not for sale. If I get the money for her, how am I going to replace her?' Nobody knew she was going to have two more graded stakes winners. But after that, nobody has ever tried to buy her from me.”

The last year has been particularly special for the Clarkland team as they've watched Into Mischief's success at stud explode into the stratosphere.

“He might turn out to be one of the greatest sires we've every seen,” Mitchell said. “We root for the Into Mischief every time we see them in a race. It doesn't make a difference whether they're favored or nor, they still come up and win some way or another.”

Of each of Leslie's Lady's foals that Mitchell has worked with, he fails to pick a favorite.

“Beholder, Mendelssohn and America's Joy were very similar,” he noted. “But I would have to say America's Joy was the most overwhelming individual to look at. She was more like American Pharoah where anybody could do anything they wanted with her. But Beholder had a presence to her and with Mendelssohn, I didn't know what kind of racehorse he would make, but I knew he was a breeder's dream. You could take any type of mare to this horse and he would probably suit them. When we were showing him, he never took his eye off whoever was looking at him. All three horses were very similar when it came to that.”

While Mitchell is looking forward to watching these last few daughters of 'Leslie' make it to the starting gate, his greatest pride will always come in showing off the famed broodmare herself. She spends most of her day in a large paddock near the entrance to the historic farm and she naps in one of Clarkland's original barns constructed from trees that once graced the property centuries ago.

“When we bought Leslie for $100,000, you never could have dreamed that she would turn out to be the broodmare she is now,” Mitchell said. “It's indescribable what Leslie has meant to the family. It put us where we can enjoy what we do. We've increased the broodmare band and the girls will have a nice band to deal with now. It's just something that you would have never dreamed could happen to a small farm like Clarkland.”