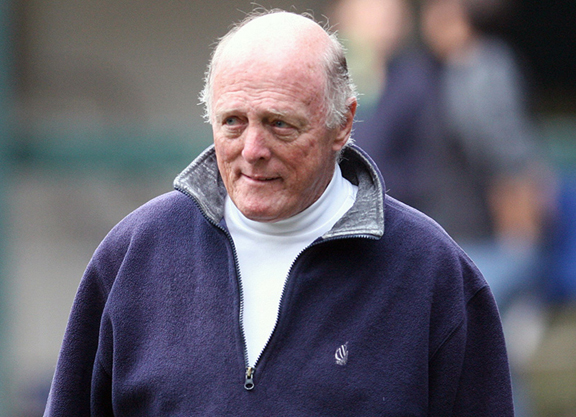 Hall of Fame trainer LeRoy Jolley, a two-time winner of the Kentucky Derby, who handled six champions and many other prominent horses, died Monday at the Albany Medical Center in Albany, N.Y., according to a report by the Blood-Horse. He was 79.

Though he never won a national title as a trainer, Jolley had such a high profile that he was featured in a Miller Lite beer television commercial in 1976. A licensed trainer in parts of seven decades, Jolley was a standout for 20 years–from the early 1970s through the early 1990s–when he won 59 Grade I races and developed champions in five divisions. He won the 1975 Derby with Foolish Pleasure and the 1980 running with the filly Genuine Risk. Between his Derby victories, he had two runners-up, Honest Pleasure, the 2-5 favorite in 1976, and General Assembly in 1979.

The son of breeder-owner-trainer Moody Jolley was born on Jan. 14, 1938 in Hot Springs, Ark. He began walking hots for his father as a 7-year-old and spent his youth around the race track, learning from the likes “Sunny Jim” Fitzsimmons. Jolley attended the University of Miami for one year and dropped out to enter the family business. He saddled his first winner, Somnus, a colt owned bred and owned by his parents, as a 20-year-old in 1958. According to Equibase stats (through Dec. 13, 2017) Jolley won 991 races from 6,907 starts and his horses had purse earnings of $35 million.

“All I ever wanted to do was train horses,” Jolley said in a People magazine story in 1975. “My dad was and still is one of the great horsemen in America. It’s the only world I know.”

Three of his champs, were elected to the National Museum of Racing’s Hall of Fame: Genuine Risk (1986), Foolish Pleasure (1995) and Manila (2008). His other champions were Honest Pleasure, What a Summer and Meadow Star. Jolley was inducted at the age of 49 in 1987. In interviews later in his career, Jolley often said that Manila was the best horse he trained.

Foolish Pleasure co-starred with Ruffian in The Great Match Race on July 6, 1975 at Belmont Park. The $350,000 showdown between the Derby winner and the unbeaten 3-year-old superstar filly had a tragic ending in front of crowd of 50,764 and a huge national television audience when Ruffian suffered a catastrophic injury to her right front leg early in the race. She underwent extensive surgery immediately afterward, but was euthanized later that night.

Jolley was a prominent player in the early years of the Breeders’ Cup and had two winners: Manila in the 1986 Turf at Santa Anita and Meadow Star in the 1990 Juvenile Fillies at Belmont Park. He had runners in eight of the first nine Breeders’ Cups, including five in four races in 1986 when the Breeders’ Cup was comprised of seven races. From 16 starters, he had a 2-1-0 record and Breeders’ Cup earnings of $2.1 million.

Four years after his first victory, he made his debut in the 1962 Derby as the trainer of record for third-place finisher Ridan–the betting favorite–who had been unbeaten as a 2-year-old. Ridan prepped for the Kentucky Derby with victories in the Florida Derby and the Blue Grass Stakes. In August at Saratoga, Ridan and Belmont Stakes winner Jaipur battled from start to finish in one of the most memorable runnings of the historic Travers S. Jaipur prevailed by a nose over Ridan in 2:01 3/5, breaking the stakes record set by Man o’ War in 1920 and tying the 16-year- old track record for 1 1/4 miles.

After that run of success with Ridan, Jolley was considered the top young trainer in the sport. However, his career dimmed for a while–he had nine wins and $44,010 in earnings in 1968–but nearly a decade later he climbed to the upper echelons of the sport in after being introduced to breeder-owner Bertram Firestone in 1971.

“Everyone, I suppose, has a time like that in his life,” Jolley said about his lean years in a 1981 story in the New York Times. “You have to learn your trade that way. I certainly didn’t start at the bottom, but during those years, I had to work my way up.”

Firestone and Jolley made what turned out to be astute purchases very early in their partnership. In 1972, they acquired the 2-year-old the filly Sparkalark, who won the Sorority Stakes and was second in the Schuylerville at Saratoga that summer, and the colt London Company, who became a multiple graded-stakes winner and earned $478,910.

Jolley finished in the top 10 in earnings by a trainer four times between 1975 and 1987. His highest standing was third in 1975 when Foolish Pleasure won the Kentucky Derby, Flamingo S. and Wood Memorial; Optimistic Gal won the Matron, the Frizette, the Alcibiades and the Selima. In 1976 he was 10th, even though Optimistic Gal won the Ashland, Kentucky Oaks, Alabama, Delaware Handicap, and Spinster; Honest Pleasure won the Flamingo, Florida Derby, Blue Grass and Travers and was second in the Kentucky Derby; Foolish Pleasure won the Donn and Suburban handicaps; and For the Moment won the Futurity.

Equibase stats show Jolley’s top earnings year was 1986, when he was eighth with $4,294,628. Jolley won seven Grade I races that year: three with turf champion Manila; the Hopeful and the Futurity with Gulch; the Flower Bowl with Scoot; the Monmouth Oaks with Fighter Fox.

Genuine Risk was the second of three females to win the Kentucky Derby. Bred in Kentucky by Sally Humphrey, the daughter of Exclusive Native was the first filly to win the Derby since Regret in 1915. She was the second female to start in the Derby since the end of World War II and the first in 21 years. Genuine Risk won the first six starts of her career against fillies, but when she finished third against males in the Wood Memorial, Jolley did not want to go on to the Derby. “I found out what I wanted to learn yesterday,” Jolley said. “There is no sense shipping her a thousand miles to find it out again.” However, Bert and Diana Firestone persisted and Genuine Risk won the Derby by one length at 13-1.

Two weeks later, the chestnut filly was second in the roughly run, controversial Preakness, when she was carried wide in the second turn by Angel Cordero on eventual winner Codex. The stewards disallowed a claim of foul and the Firestones launched what turned out to be an unsuccessful appeal with the Maryland Racing Commission. Genuine Risk was second in the Belmont.

The Jolley-Firestone partnership ended late in 1981 when Bert Firestone decided he wanted a private trainer for his large stable. Jolley opted to remain a public trainer with Peter Brant as a top client.