Leofric Too Tough in Clark 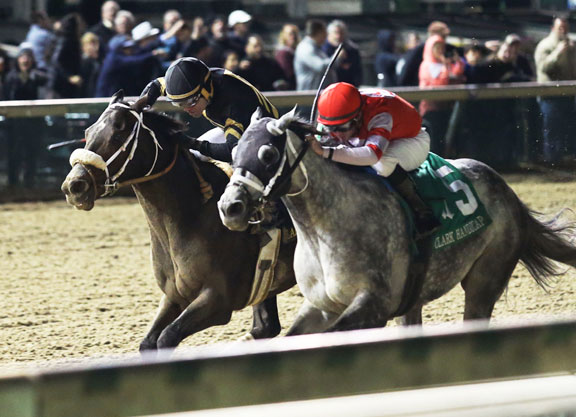 A $330,000 Keeneland September yearling from a female family nurtured over decades by noted breeder Peter Blum, Leofric (Candy Ride {Arg}) was sold to owner Steve Landers for $100,000 at the 2016 Keeneland November sale, a decent amount of money for a well-pedigreed horse, but one that had placed just once from three career starts while under the care of Neil Howard. It all came full circle Friday afternoon, when the handsome gray entire put the wraps on a truly memorable season with a doggedly determined defeat of an equally game Bravazo (Awesome Again) in Friday's GI Clark H. at Churchill Downs, winning for the eighth time in 11 starts for his new connections.

The 3-1 third choice behind defending champion Seeking the Soul (Perfect Soul {Ire}) and Bravazo, Leofric got the perfect spot in transit, covered up in fourth as Prime Attraction (Unbridled's Song)–just defeated by Leofric in the GII Fayette S. at Keeneland Oct. 27–cut out solid fractions of :23.56 and :47.58 on the sharp end. About the same time Bravazo was being stoked up by Joel Rosario for a three-wide run around the far turn, Leofric was given his cue to take the race to the pacesetter and the stage was set. Leofric turned for home narrowly in front and it appeared that Bravazo may have the momentum into the final furlong. But the 5-year-old gray entire, giving Bravazo three pounds under the handicap conditions of the race, stiff-armed that challenge and stuck his head across the wire first.

Seeking the Soul settled in the latter half of the field early on and opted for a run inside of a tiring rival at the quarter pole. He looked to have every chance at the eighth pole, but could not go with the top two and settled for third in defense of his title.

“We had a great trip in the pocket the entire way around,” said winning jockey Florent Geroux. “That made the difference. This is a really nice horse. He fought Bravazo the whole way until the wire. I'm so proud of his effort.”

Second to Hawaakom (Jazil) in the GIII Razorback H. at Oaklawn in February, Leofric took a Prairie Meadows allowance in his July return to action and added a narrow victory in the GIII West Virginia Governor's S. Aug. 4. Third to 'TDN Rising Star' Yoshida (Jpn) (Heart's Cry {Jpn}) after attending a good pace in the GI Woodward S. at Saratoga Sept. 1, he chased Prime Attraction in the Fayette and just got his head home first.

Leofric is the 14th Grade I winner for his sire and the 19th top-level winner produced by a daughter of Unbridled's Song. Leofric represents five generations of breeding for the Atlanta-based Blum, who picked up fifth dam Mono (Better Self) when she was 12 years old at Keeneland January in 1975; Mono's dam Sin Igual was a full-sister to 1946 Triple Crown winner Assault. Leofric is out of an unraced half-sister to MGSW & GISP Multiple Choice (Mt. Livermore) and SP Proposal (Mt. Livermore), dam of the stakes winners Inspired (Unbridled's Song), Silver City (Unbridled's Song), Elope (Gone West) and Initiation (Deputy Minister). Third dam Chosen Lady, a granddaughter of Mono and full-sister to Academy Award, was the dam of 1998 GI Ashland S. winner Well Chosen (Deputy Minister), whose son Telling (A.P. Indy) was a two-time winner of the GI Sword Dancer Invitational S. Lady Godiva is the dam of Leofric's 2-year-old half-brother Box of Chocolates, who is in training at the Fair Grounds, and a yearling colt named Candy Bar (Uncle Mo) that realized $225,000 from Eddie Woods's Quarter Pole Enterprises at this year's Keeneland September sale. Lady Godiva was bred this year to Candy Ride and sold to Bluewater Sales, agent, for $600,000 at this year's Fasig-Tipton November sale.