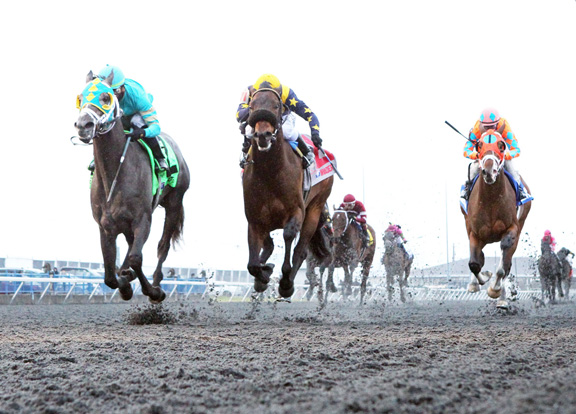 “I was worried right down to the wire,” Maker said. “I try to bring some of my better turf horses for the Ruby. It's paid off over the years. He ran a great race off the bench in the Dania Beach in a very competitive field and I thought he would run very well here. He's a good-sized horse. His conformation's great. Great mind on him.”

Drawn widest of all in post 11 in this first try on the all-weather, the gray stalked from a three-wide third as stablemate Fancy Liquor (Lookin At Lucky), a narrow debut winner over the Gulfstream turf last time, led Invader through opening splits of :23.76 and :47.78. Field Pass began to wind up entering the far turn as those two locked horns. Invader started to get the better of Fancy Liquor in deep stretch and briefly looked like he could be on his way to his third straight victory, but just couldn't hold off Field Pass, who got the money under a perfectly timed ride by Irad Ortiz, Jr.

Runner-up in the GIII With Anticipation S. over the Saratoga lawn and fourth after showing speed in Keeneland's GIII Dixiana Bourbon S., Field Pass concluded his juvenile season with a well-beaten sixth in his lone try on dirt in an optional claimer at Churchill Downs Oct. 27.

Stalwart Lemon Drop Kid, himself a Grade I winner at two, three, and four, has quietly racked up an outstanding record as a stallion with 96 black-type winners. Probably most associated with turf stars like MGISW Beach Patrol, his 46 graded winners have nonetheless come on every surface and have included GI Kentucky Oaks winner Lemons Forever. Damsire Runaway Groom, who, like Lemon Drop Kid, won the GI Travers S., counts 61 stakes winners among his daughters' foals. Field Pass is one of only two named foals out of his dam, a pure sprinter whose eight career wins were all at five furlongs.